MCHAP was established by the Illinois Institute of Technology (IIT) in Chicago to recognize the best built works in the Americas. As Kenneth Frampton noted when the finalists were announced in Santiago, Chile, the MCHAP Awards are the first time that an architectural prize has been approached, not in a trans-atlantic, horizontal manner, but rather vertically across the Americas.

Although initially the jury intended to select one work to be honored for the 2000-2013 period, they felt that both projects represented “an uncommon expressive display of structure,” and divided the 13-year period into two parts. Siza’s Iberê Camargo Foundation was selected as the 2000-2008 winner, while Herzog & de Meuron's mixed-use parking garage was selected for the 2009-2013 period. The two winning projects were selected from a total of seven finalists by jury members Jorge Francisco Liernur, Sarah Whiting, Wiel Arets, Dominique Perrault, and Kenneth Frampton.

Learn more about the winning projects after the break. 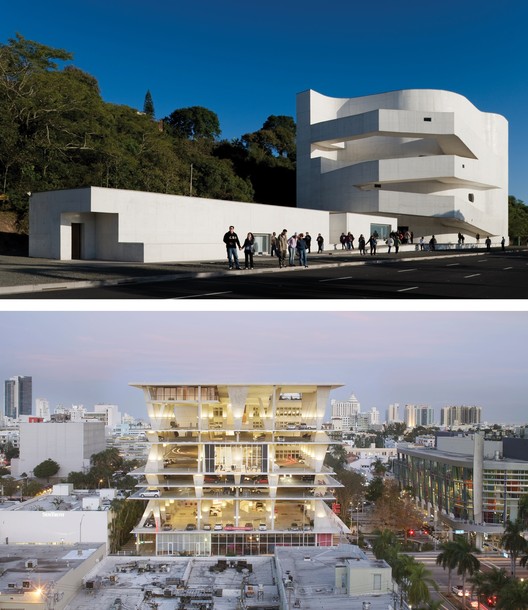 The Iberê Camargo Foundation was Siza’s first project in Brazil, built to house the collection of Brazilan painter Iberê Camargo. “Whether it was Siza Vieira’s personal relationship with Brazil, or the eagerness of his client; the resistance of its site makes this work strong in all its veins,” said Arets on the MCHAP Jury’s selection.

“Carved from a mountain, and only a short distance from the sea, this massive, hardly perforated building has an ambiguous, complex, and rigorous ethos. The project’s site was created with respect for nature by the intervention of a solid bulwark for the arts; it created a ‘found’ location, and then transformed it into a great address... The Iberê Camargo Foundation’s strategy of creating an interior and exterior void by way of infrastructural device has created a unique setting for the way in which visitors are confronted with Camargo’s art. Its covered ramps— disconnected from the exhibition—include small windows that allow for views of both the sea and the skyline of Porto Alegre.”

Completed in January 2010, Herzog & de Meuron’s 1111 Lincoln Road is a former bank building transformed into a mixed-use parking structure, which includes residences and retail space in addition to parking. "It is an iconic building; it is a prototype for an exposed metropolitan-structure in which the urban infrastructure is an integral component of the building. The city’s street life is even present in front of the privately owned penthouse, on its top floor," Arets said, explaining the Jury's selection of the project.

"The oversized structure, without an enclosed façade, invites unforeseen program and is willing to accommodate neighborhood conditions within a setting of panoramic experiences. Planned for its site-specific arrangement, the project recalls interventions within the hometown of its architect–Basel.... The journey around, upward, and throughout this spiraling building is an event within itself. It is a destination that created an address by way of its anticipation of an unpredictable future—that’s an ambitious enterprise."

Check out the seven finalist projects and all of our MCHAP coverage, here.