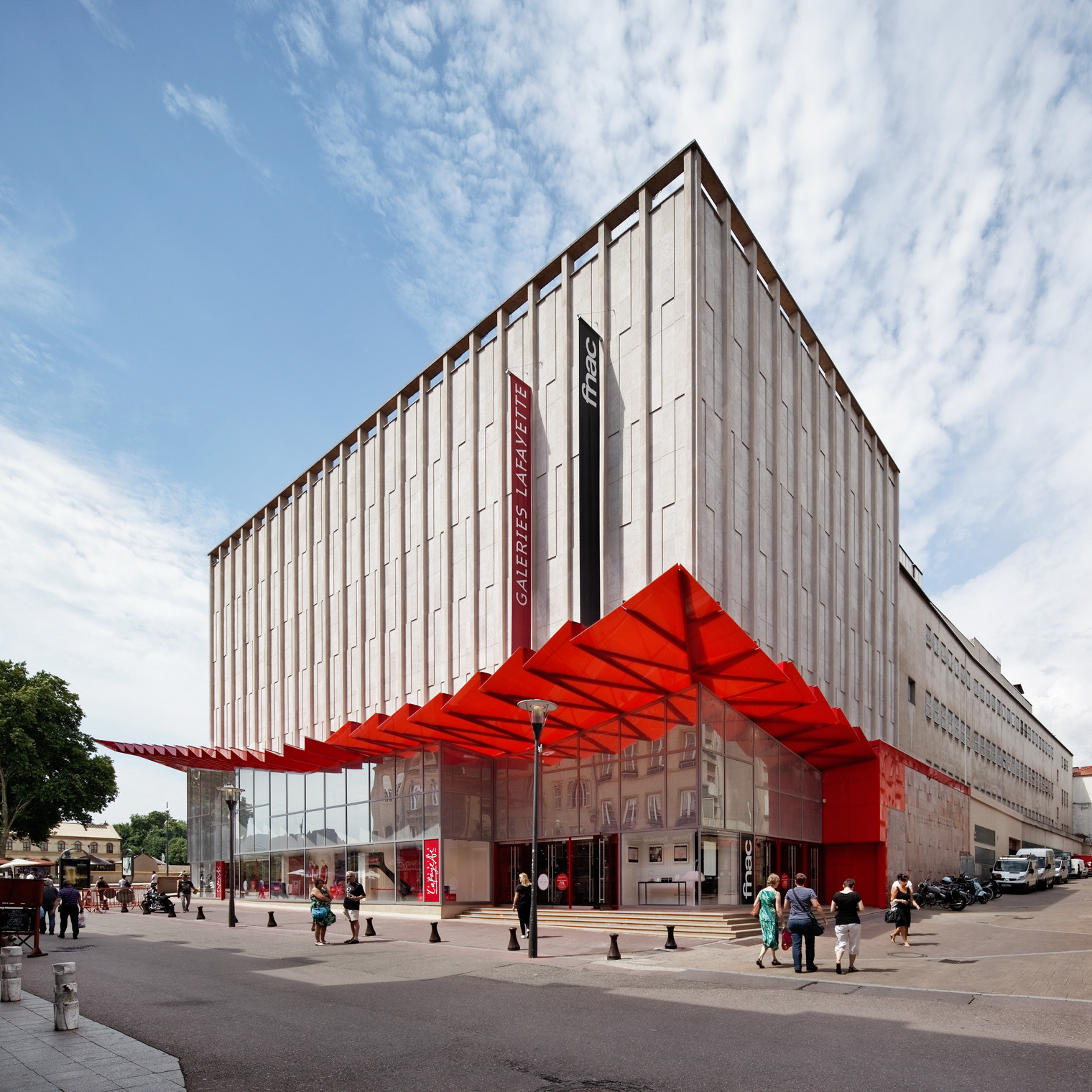 Reflectng the economic and social changes of the 19th century, the Department Stores, through their commercial and architectural boldness, are a part of the history of a city. In Metz, the Galeries Lafayette have then been a vector of the city’s image, contributing to its touristic and commercial dynamic and successively reflecting its different times.

Built in the 1980’s, the building – a true landmark in Metz – had to evolve in order to adapt to the new values of the Galeries Lafayette and to become a reference, both on the commercial and on the architectural level. Singular and remarkable element in the urban landscape of the city, the architect has focused on this urban scale of the building and referred to the symbolic aspect of Department Stores to give it a new image and identity.

Clothed in a stone facade, relatively cold and without any window or opening- except in its lower part – the existing building had entrances and vitrines that were not very generous. In order to transform the image of this building, visible from the other side of the square and to turn it into a signal or

landmark for passersby, the architect decided to preserve the stone façade, with interesting classical ornamental features and to concentrate on its lower part, space where the public circulates.

With the objective to reconnect with the history of the Galeries Lafayette, Manuelle Gautrand chose to create a canopy as a reference to the exceptional glassworks that were built in the early 20th century. The project has been organized around this overhanging façade that revisits in a contemporary manner a strong symbol of the Department Stores.

In a large ethereal movement of pleated glass, the canopy runs along the three facades of the building, on a total length of 120 meters. To echo the stone that it enhances and to refer to the Galeries Lafayette, the architect chose a red colored canopy which width varies from 2.30 meters to 5.30 meters, using a can􏰁lever of 7.40 meters at the angle of the building; the height from the ground varies from 3.50 meters at its lowest point, to 11 meters at its highest.

Made of two tempered and laminated glass, in between which are enclosed four layers of red film – necessary to obtain the intensity of red desired – the canopy, 22 millimeters thick overall, finds a rhythm through a series of folds that are assembled with one another in a large wave-like movement. This long flight of glass starts at one side of the store, on Winston Churchill Street, then rises gradually up to the angle and main entrances of the building, to lower down along Clercs Street, and rise up again when approaching the following entrance on Poncelet Street.

Technical achievement, the concepton of the canopy was realized by TESS Ingénierie. The canopy is held by a metal structure made of triangular brackets that accompany each fold on its length and diagonal, in an almost chiseled manner.

The large folding of this canopy, which gives more height and breathing to the lower facades, allows balancing the general propor􏰁ons of the building. The stone is now displayed in more reasonable propor􏰁ons. The more the glass folds approach the angle of the building, the more they expand, as if they were trying to reach passersby on the Republic Square. The stone is now seen through the glass filter, becoming the setting of a new modernity.

 The building now exists on two scales: that of the square, offering a landmark from afar, and that of the passersby, offering now visible and generous entrance gates.

The whole lower part of the building, situated under the canopy, is reconstructed in glass alternating between large vitrines and entrance gates. The vertical windows are screen- printed with a white pointillism pattern that comes to highlight them a delicate frame. In this way, they are displayed next to each other along the facades, like frames or pictures that are exposed to the public on the square.

The architect wanted the windows to reflect and multiply the red color of the canopy, so as to give the impression that the canopy would extend endlessly into the lower façade of the building. These windows also reflect the surroundings made of Jaumont stone. Whereas the upper facades of the Galeries Lafayette are made of a matt stone, the lower facades reflect the golden stones of the surrounding buildings.

A lighting enhancing the new canopy

 A project of lighting and illumination of the façade was specifically developed with the light conception agency ON. At night, the light design reinforces the red color of the canopy that assures its nocturnal presence in the landscape of Metz and goes far beyond a simple “staging”.

The light continues the architectural gesture when the night falls. Completely intertwined with the structure, it offers new interpretations of it:

- radiant, it shows the opalescence of the suspended glass under different angles;

- graphic, it underlines the folds that are reflected in the lower windows, emphasizing the effect of a suspended veil;

- dynamic, it seems to make the canopy breathe in a slow beat. This quietness is at times disturbed by a vibration of the light that comes to deconstruct the original drawing of the canopy.

The technology used is inspired from that of the neon that has been representative, for many years, of the “commercial and advertising nights” in large cities and metropolis. The neon celebrated its centenary in 2010. About 500 meters of electroluminescent tube were installed on the canopy. A specific coloring has made it possible to find a perfect combination between the shade of the glass and that of the neon. Equipped with transformers and used at slightly under 30% of their capacity, the energy consumption is completely controlled. 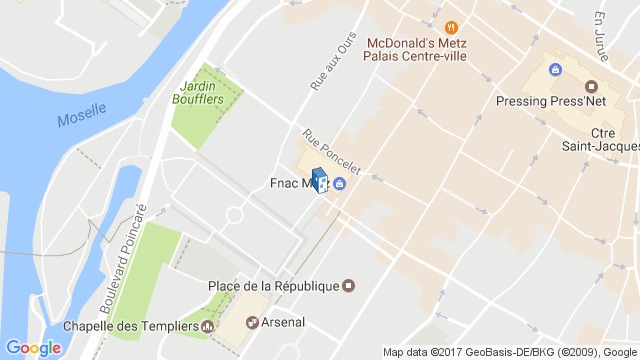