Jean Nouvel has unveiled the official design for the National Art Museum of China (NAMOC). Originally inspired by the simplicity of “a single brush stroke,” the 21st century art and calligraphy museum will become the centerpiece of a new cultural district at Olympic Park, rising next to the historic axis of Beijing and symbolically connecting to the Forbidden City.

New images of the NAMOC and more from Nouvel, after the break…

Self-proclaimed to be one of the “greatest museums of the world,” the NAMOC will contain collections dating back to the Ming Era. Featured programs will include permanent and temporary exhibition galleries, a research and education center, auditorium, large-scale interior garden and a series of public spaces.

“Our proposal is the result of one year of catalysis, of immersions, of dialogs and explorations to translate, synthesize, symbolize and materialize the spirit of the Chinese civilization,” described Ateliers Jean Nouvel. “Our goal is to protect the miracles created with ink throughout the centuries, to reveal the force of a living art… to welcome the artist of tomorrow.

“The museum is a milestone that now establishes architecture as a civilizational medium, as the memorial symbiosis of nature and human expression. These exceptional conditions are able to elicit this rising attitude, this symbiotic response, and goes beyond being just a traditional competition of established styles. Today, the role of architecture is to catalyze, to precipitate the spirit of a situation should it be individual, plural or civilizational.”

“The NAMOC is written in space as a fragment of an ideogram shaped by an artist over a long period of time, giving it both a sense of mastery and voluntary incompleteness: by taking off the ground it imposes itself into the sky. It thus resists the laws of gravity while asserting its presence.”

“Mountainous horizons, reflections of the trees on the boulders, reflections of the sky on the sky, green rocks and green trees, branches behind stone grates, people strolling disappearing behind the boulders, we can make out works of art in the middle of a luminous ray of light, colorful images illuminate grey cracks and crevices, yellow lichens suffer on the grey silver plated stone.”

A collaboration with the Beijing Institute of Architectural Design (BIAD), the highly acclaimed museum project is the result of an international competition that crowned Nouvel victorious over Rem Koolhaas, Zaha Hadid, Frank Gehry and others. 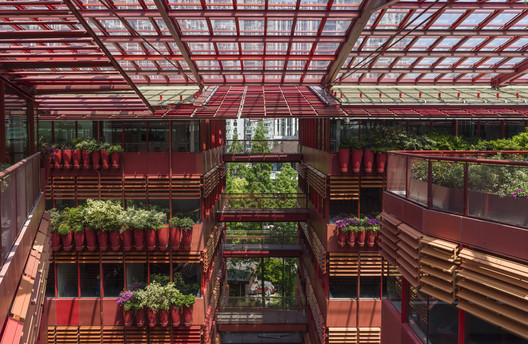