If you don't have access to an architecture library (and even if you do), sifting through shelves can take hours. Buying books can be even more painful — for your wallet, at least. Instead, why not browse this list of 25 books that are all free and easily accessible online? Some are well-known classics of architecture literature, but we hope you find a few surprises as well.

1. Vitruvius: The Ten Books on Architecture (15 BC)
By Vitruvius Pollio
Quite simply, one of the most influential architecture books of all time.

7. The Architectonic Colour: Polychromy in the Purist Architecture of Le Corbusier (2011)
By Jan De Heer
This book dissects and examines Le Corbusier’s relationship with Purist Painting.

8. Design and Analysis (1997)
By Bernard Leupen, Christoph Grafe, Nicola Kornig, Mark Lampe and Peter de Zeeuw
Written by a team of professors at TU Delft who advocate for "design analysis” - a way of fusing research and education for the advancement of design practices.

9. Surrealism and Architecture (2005)
Edited by Thomas Mical
Thomas Mical attempts to show the significant connection between surrealist painting and architecture.

10. The Architecture of the City (1982)
By Aldo Rossi
Pritzker winner Aldo Rossi's take on urban planning’s impact on the construction of the city. His urban theories were considered groundbreaking at the time this book was published.

11. Louis Sullivan As He Lived: The Shaping Of American Architecture (1960)
By Willard Connely
Willard Connelly's biography of the influential Louis Sullivan, mentor to Frank Lloyd Wright and the man who made Chicago the steel city it is today.

13. Sticks and Stones (1926)
By Lewis Mumford
Lewis Mumford on American building and architecture, from vernacular to the early 19th century.

14. De Re Aedificatoria (1443)
By Leon Battista Alberti
Also known as On The Art Of Building, De Re Aedificatoria was the first book on Architecture printed during the Renaissance. It is considered by many to be as important an example of early architectural writing as Vitruvius’ Ten Books.

17. Architecture And Furniture (1938)
By The Museum Of Modern Art
These essays highlight Alvar Aalto's designs in architecture and furniture. Originally published as a companion to a furniture and design exhibition at the MoMA in 1938, the highlight is Aalto’s early use of new and innovative wood products.

19. Four Walking Tours Of Modern Architecture In New York City (1961)
By Ada Louise Huxtable
Huxtable was the first architecture critic at The New York Times and a Pulitzer Prize winner. This, one of Huxtable's lesser known works, still has relevance to this day (even if a few of the buildings have had name changes).

20. Architecture: Nineteenth And Twentieth Centuries (1958)
By Henry Russell Hitchock
A book devoted to materials and their influence on 19th and 20th century architecture.

21. Built In USA: Post-War Architecture (1949)
By Henry Russell Hitchcock and Arthur Drexler
Photos, plans and sections of the works of mid-century modern masters, including Alvar Aalto, Mies van der Rohe and others.

25. Thomas Jefferson Architect and Builder (1873)
By I.T. Frary
A critical look at Thomas Jefferson as an architect, including the many (architectural) mistakes he made throughout his career. A particularly intriguing section is a long history of the constant rebuilding and redesign of Monticello. 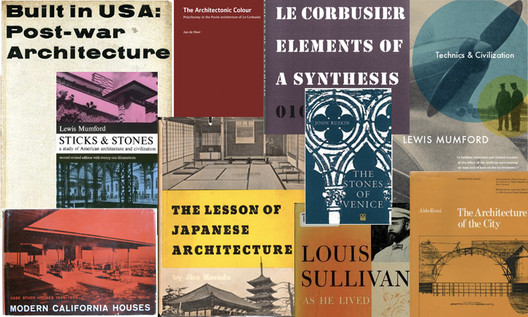