Born and raised in Valencia, Calatrava grew up wanting to be an artist, taking art classes at 8 years old. Encouraged by his parents who saw potential for an international future for their son, he left home to attend l’Ecole des Beaux-Arts in Paris. However, when he arrived in 1968, the student protests were at their climax and, finding the classes canceled, he returned to Valencia to enroll in the Escuela Técnica Superior de Arquitectura. After graduating, he went to ETH Zurich to receive a degree in structural engineering followed by a PhD in technical science, making him one of the few architects at the time to also be fully trained as an engineer.

Starting his own practice in Zurich in 1981, Calatrava soon won a competition to design a local train station. The design, inspired by the skeleton of a dog that he had received as a gift, would be an indication of the style that would later define him, with curving concrete corridors that come together to create the semblance of a ribcage. His first American project, the Milwaukee Art Museum, went even further, featuring moving parts that required off-site fabrication, with organic forms reminiscent of a bird. It was also during his early career that he would design many of the bridges that helped to define his reputation as an architect, including his Bac de Roda Bridge in Barcelona, Spain.

In the wake of 9/11, Calatrava received the commission in 2003 for the redesigned PATH Rail Terminal at the World Trade Center. However his design, evocative of a phoenix rising from the ashes, began a series of recent controversies, as his project was delayed several times and went violently over budget. This pattern would be repeated in a number of projects including his canceled Fordham Spire in Chicago (also known simply as the Chicago Spire) and his removal from the commission of the Cathedral of Christ the Light in Oakland, California. Calatrava, however, has disputed the poor reputation he has collected in recent years, arguing in many cases that problems with projects were caused by forces beyond his control. He nonetheless remains one of architecture’s most influential figures—his ambition and structural ingenuity pushing the envelope with new projects like the Museum of Tomorrow in Rio de Janeiro and the Yuan Ze University Project in Taiwan.

See all of Santiago Calatrava's Works featured on ArchDaily via the thumbnails below, and more coverage below those: 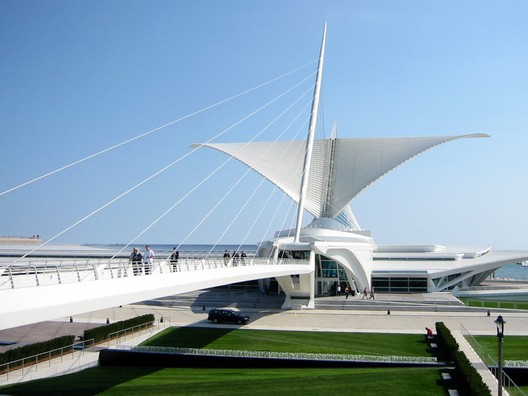