The shortlisted projects in the competition to design a new art gallery for Goldsmiths College at the University of London have been revealed. The project will see a new 400 square metre gallery created in the back of what was formerly a Victorian bath-house, and is now the college's Grade-II listed art studios. Six shortlisted practices were given six weeks to design a gallery which works with the existing industrial structures - including the building's old water tanks.

The designs will now be judged by Goldsmiths' competition jury, a panel which includes David Chipperfield and sculptor Antony Gormley.

Read on after the break for details of all six proposals 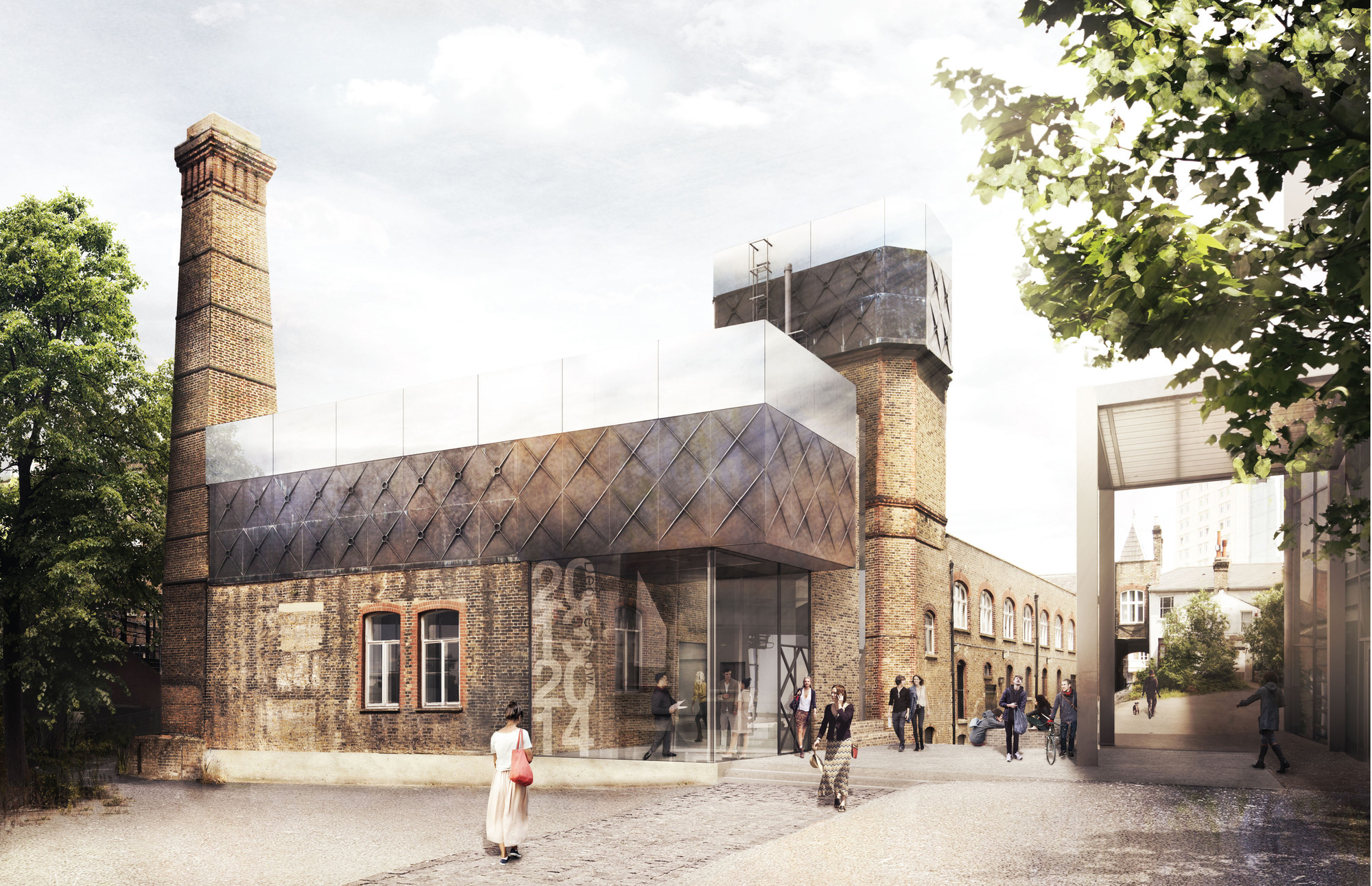 The strategy by 6a Architects focuses on creating new galleries with as few changes to the existing structures as possible. They say: "The new Art Gallery at Goldsmiths College already exists. The challenge lies in how to reach it with the smallest intervention.

"The tanks, washrooms and cellars offer not only abundant space for the new gallery but a range of qualities impossible to imagine were they not inherited from the Victorian baths."

The design eschews an overarching concept or grand gestures in favor of a detailed look at each element of the existing building, focusing on how to make each space contribute to the whole.

Assemble have chosen to add to new steel frame 'lanterns' to add to the space, creating "a provocative and stimulating dialogue between new and old."

In their proposal, Dow Jones Architects focus on connecting the building back to the city, both metaphorically and physically.

This physical connection is made with a new entrance and public space at the rear of the building. This process also enhances the metaphorical connection to the city, allowing the existing building to express itself more completely as an element within the city.

"The process of stripping away and opening up brings the existing building into the foreground, and emphasises the drama of the tanks and chimney," say the architects.

In addition, a new roof light is inserted between the two tanks, acting as a beacon for the building at night. Inside, the area under this roof light acts as the central organizing space within the building.

With another proposal that aims to utilize the existing spaces of the bath house, Harry Gugger Studio's design proposes a series of galleries in both the old tanks and the labyrinth of spaces on the lower floors, with vertical circulation housed within the existing water tower.

In a solitary alteration to the exterior structure, the water tanks will be extended upward with clean, modern additions which bring light into the gallery spaces below.

One of the major focuses of HAT Projects was to link spaces coherently, designing a new public space outside the building, and a dramatic three-story central space inside which connects the buildings floors.

HAT Projects have also proposed to extend the water tanks upward, however they propose an extension which draws heavily on the embossed appearance of the existing iron panels.

"The powerful identity of the tanks themselves is celebrated and extended both through their internal reuse, and through emphasising and extending their external presence," say the architects.

Inspired by the way that the rest of the building was converted into the college's MA Studios with minimal intervention, Jamie Fobert Architects have also proposed a design with minimal external additions.

"The rear of Laurie Grove Baths was not intended as a formal elevation. It is therefore curious and engaging that these buildings will become a significant face for the university," they say. However, they believe the original structures "have a rough beauty which should not be denied."

Only a steel stair is added, which is designed to blend in with the existing structure, and provides both access and natural light to the main gallery which is situated on the lowest floor.