ELEMENTAL has given us details on a proposed 14.5 km pedestrian and bike path within Santiago, Chile that will run along the base of San Cristobal Hill and connect the city's many distinct communities. According to ELEMENTAL, the proposal - named "Metropolitan Promenade" - seeks to facilitate the use and quality of the city's public spaces.

Read the full architect's description, after the break. 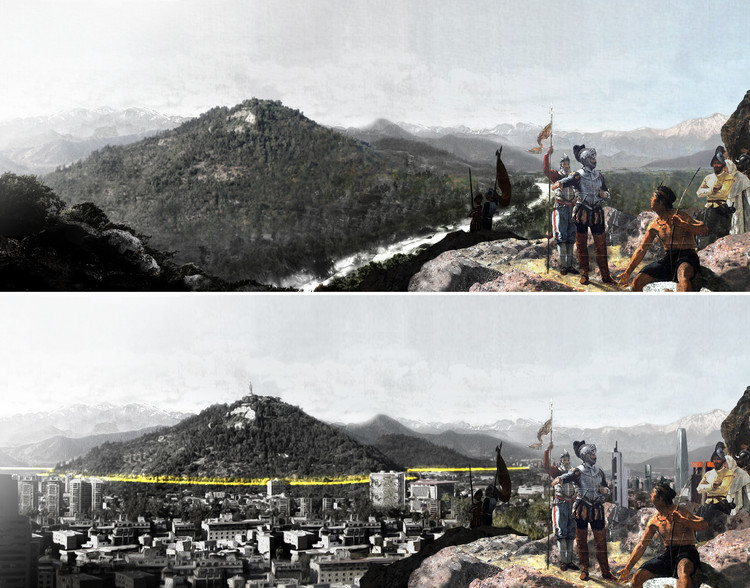 From the Architects. Chile’s geography is much stronger than its built environment. The Andes mountains for example are much more relevant in defining Santiago’s identity than any building or its urban skyline. But geography is not only a visual element; one of Santiago’s nicest features is its climate: mild winters, dry summers, crisp mornings and nights throughout the whole year. If anybody pays attention to the paintings and engravings that describe the origin and foundation of the city, one realizes that our most valuable asset is our geography both as a figure and as background.

On the other hand, Chile is also known for, despite a sustained economic growth in the last decades, having one of the most embarrassing inequalities in the region, which is creating a very tense “social climate”. Those inequalities are brutally expressed in the city, with first world standard neighborhoods segregated from third world standard areas.

So the question is, can Santiago’s most relevant features, geography and weather, contribute to correct our social inequalities? How?

Almost the only thing that one hears as a way to correct inequalities is income redistribution. In order to redistribute income, education plays a key role; the assumption is that if you have access to a better education, you may have access to better jobs. i.e. better income. And a better salary may pay for a better quality of life. Such a process takes time because before having a better-educated generation of students, one has to have a better-educated generation of teachers. In any case it has to be stated that even if we are patient, the problem of inequalities is not only economical but mainly cultural. So the real challenge is not about leveling but about integrating.

In that sense, the city may be a shortcut towards equality. Strategically identified urban projects may improve quality of life without even touching monthly income. With a salary that remains exactly the same, living exactly in the same place where a housing solution was obtained, a family can improve their quality of life if high standard projects of  public transportation, urban infrastructure and public spaces are implemented. Public space is particularly effective and efficient to generate a redistributive effect. The most successful public spaces tend sit on top of geographical elements: promenades along sea sides, walkways along rivers, belvederes on top of hills, naturally capitalize the geography’s potential of creating quality urban places. So public spaces of geographical scale may be considered fresh resources and powerful tools to correct inequalities.

Unfortunately, Santiago does not have public spaces of a scale and a standard that make a good use of its geography as a resource to correct inequalities. There is no single public space of a dimension in accordance with the metropolitan scale it has reached. There is not a single public space large enough to be able to take a nice walk; after a few minutes walking, one begins to wonder where to continue; our public spaces are like those intermittent rivers of the desert, which disappear after a while. In fact, our river, the Mapocho, which could have been a natural place along which a promenade could have been built, has been occupied with highways and infrastructure leaving only intermittent public spaces along its banks.

We have only one chance left: The Santiago Metropolitan Park on the San Cristobal hill. It is a chain of mountains that descends from the Andes towards the valley; its form deviates the Mapocho’s curse, transforming the whole hill in a kind of dam that holds the geological material taken by the river from the mountains. There is an 100 meters drop when the foot of the hill facing east is compared with the foot of the hill facing west. Such a geographical barrier meant that north part of the Santiago Valley had no water to be exploited agriculturally. So, during the colony, an irrigation canal, the Canal El Carmen, was built around the hill in order to bring water from the river to the northern areas of the valley. Later on, in the 60’s, a tunnel cutting directly across into the hill was built leaving the irrigation canal as a dry trace at the foot of the hill.

In 1999, architect Ricardo Torrejón presented as his thesis a project to transform the old Canal del Carmen into a pedestrian promenade. That old canal trace has an extension of more than 10 kilometers. Given that Santiago valley’s slope is 2 per cent and that of the irrigation canal is only 4 per thousand (i.e., practically horizontal), as the canal moves around the hill, it seems to rise above the city skyline and the entire valley. When Torrejón began to work at Elemental we assumed his idea as a common task and began to find a way to transform this kind of hill’s plinth or zócalo to become a promenade of geographic magnitude to provide Santiago, at last, with a walkway where one could forget about the road and enjoy its geography and weather.

Despite its privileged position, the Metropolitan Park, is visited only by 5 million people every year (i.e. each citizen of Santiago visits the park only once a year). Although huge efforts have been made to transform the original rock into a green space, as it is a hill, it is not a place fit for taking a walk. What makes the difference may be subtle, but real: cars use the same lanes as pedestrians and those lanes are sloped. Some sports may be practiced, but one cannot go riding bikes with children, walking with the elderly people, play ball or simply walk, because there is no horizontal surface; only a horizontal place can provide that typical carefree level of a walk. The importance of the project for a Metropolitan Promenade is that it could introduce a horizontal, pedestrian, continuous walkway that could make more accessible the hill to all citizens.

Despite the simplicity of the physical operation required to transform an agricultural canal into a public space –the most difficult part of cutting the hill side was already done- 10 years went by without us being capable of convincing the different authorities of the importance of such a project. It was evident that the scarcest resource was not money but political will. It was only in 2008 during Michelle Bachelet’s first presidency of the country, that we finally saw an opportunity that could work as a foundational moment for the Promenade: the National Service of Daycare Centers, JUNJI, was looking for a place to create a Children’s Park. We met with JUNJI’s National Director, Estela Ortiz, and she agreed to design the Children’s Park on the most western side of the San Cristobal hill, the one where the most underserved neighborhoods are, using its upper limit as the first phase of the Metropolitan Promenade.

The site we were given had a steep slope and we decided to transform its difficulty into its major benefit. The slope could be used to dissolve the old dilemma of children’s playgrounds: do we make them safe or do we make them fun? Being on a hillside, allowed us to accumulate height for the slides for example (fun), without ever being more than 30 centimeters away from the ground (safe). Or it enabled us to make tree houses that were right into the crown of the trees without ever climbing but only by walking horizontally into them.  The upper limit of the Children’s Park coincided with the old irrigation canal, so when the Children’s Park was inaugurated in April 2012, it also meant the first phase of the entire promenade was inaugurated. In 2013 we were asked by the Metropolitan Park’s administration to transform another kilometer of the old canal on the eastern side of the hill into a walkway; but we were asked to lower the standard to a mere path and not a proper promenade.

In 2014, during Bachelet’s second term, the Metropolitan Region’s Superintendence, identified the Metropolitan Promenade as one of the projects that could contribute to improve the quality of life of the people at a big scale with a relative low cost, so the political decision to complete the total extension of 14km of the whole ring was taken. During this year, 4km will be executed with the full promenade standard. Simultaneously, we will be working in developing the designs and technical specs for the other 10km so that east and west of the Park can have a direct connection and rich and poor districts can come closer to each other. This is important because it will reduce the historical debt of public space that Santiago has with its inhabitants, improving the current 4m2 per person. These numbers do not only reflect a deficit but also hide our inequalities: rich neighborhoods have 18m2 per person while poor areas have barely 1m2 per inhabitant.

So the Metropolitan Promenade not only gives direct and democratic access to our main environmental asset improving people’s quality of life with a high standard public space; it also works as a new pedestrian and bicycle route that connects in a friendly and efficient way rich and poor municipalities. It is accepted that cities are weighed by what people can do in them for free. In a country as unequal as Chile, this is particularly relevant. Quality public spaces are not only a demand of a society that has already solved its basic needs, but a fundamental redistributive tool. The city, and public space in particular, is a compensation mechanism for all those that cannot have access to a better quality of life in a private way. So the city, if well designed, can become a more efficient resource than money to improve people’s quality of life.

So the Metropolitan Promenade not only gives direct and democratic access to our main environmental asset improving people’s quality of life with a high standard public space; it also works as a new pedestrian and bicycle route that connects in a friendly and efficient way rich and poor municipalities. It is accepted that cities are weighed by what people can do in them for free. In a country as unequal as Chile, this is particularly relevant. Quality public spaces are not only a demand of a society that has already solved its basic needs, but a fundamental redistributive tool. The city, and public space in particular, is a compensation mechanism for all those that cannot have access to a better quality of life in a private way. So the city, if well designed, can become a more efficient resource than money to improve people’s quality of life.