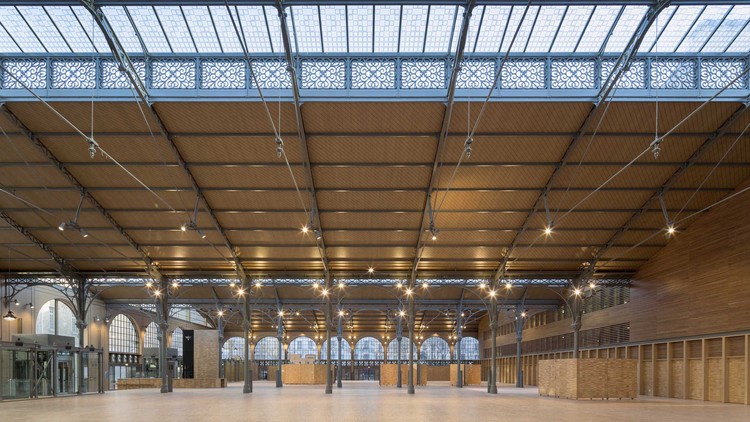 Text description provided by the architects. The Carreau du Temple, a historic steel and glass market from 1868 located in the Marais district of Paris, was reopened by the mayor of Paris on 20 February 2014. This building, with its characteristically transparent architecture, is one of the few surviving structures from the nineteenth-century tradition of metal framed architecture in Paris. It was listed on France’s heritage list in 1982, five years after the demolition of the Paris Halles and its famous Baltard pavilions – a loss that is still bitterly regretted today.

In 2001, local residents were asked what they thought should become of the Carreau, and it was their vote which determined its future function of housing cultural and sports facilities. The jury of the competition held in 2007 among five architectural firms awarded the project to studioMilou architecture, led by its founding architect, Jean François Milou, and having branches in Paris and Singapore.

In its design, studioMilou architecture sought to ‘idealize’ this listed monument by emphasizing the refinement of its structure and making it as transparent as possible such that passers by would be able to appreciate the poetic form of its metal superstructure at a glance. In order to do so, studioMilou replaced the masonry wall that had previously enclosed the building with a glass, steel and wood one, maintaining the shape of the original construction while creating visual permeability that revealed the spectacular interior space.

The work was done in such a way as to give the façades exactly the right width for their reinforcement with new steel pillars, to isolate them from the rest of the building, and to insert doors into them that would open outwards with an extension of less than 20 cm onto the exterior as required by the regulations. This has meant that the façades of the Carreau have not needed to be thickened to contain double sets of doors or emergency exits.

On the upper part of the building, the use of limited-width steel frames as the setting for double-glazed panels has allowed the original relationship between empty and filled spaces to be retained, while at the same time meeting the acoustic and thermal constraints required for this type of facility. Light coloured oak has been used throughout for the interior finishing, a choice made on the recommendation of the listing authorities who wanted to see the contemporary architectural interventions in the building clearly marked as such.

Inside the halls, a second skin of oak panels has been placed 45 cm away from the metal arches and exterior pillars. This enables the building to meet all the relevant thermal and acoustic regulations. The original glazing of the roofs has been entirely replaced by new steel-framed glazing elements, limited in width and double glazed. The overall look of the zinc roof-covering has been conserved, allowing the Parisian character of the roofs of the three halls to be retained and the whole of the structure inside the halls to be conserved.

The original building, of about 3 500m2, has been extended by the addition of two lower levels to attain a total gross floor space of 9 045m2. The studioMilou project proposed the construction of a ground floor level that would reveal the full beauty of the original market and two underground levels, one a mezzanine level for the building’s technical facilities, and a high-ceilinged lower level with new facilities for sport, dance, and sound performance and recording. There is a 250 place auditorium on the ground floor level using a rounded design that emphasizes its character as a contemporary addition 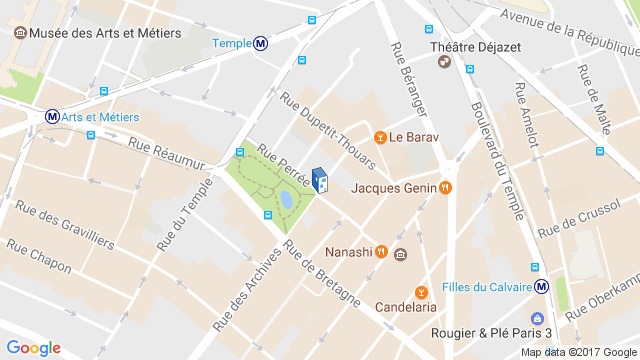