Smiljan Radic has been announced as the winner of the competition to design a landmark on San Cristobal Hill, in the heart of Santiago, Chile, that consolidates the hill's numerous antennas into a single infrastructure.

According to the Contest Director, Luis Eduardo L. Bresciani, the purpose of this competition was to generate an innovative structure of iconic character, an architectural work of outstanding quality that would differ from other towers in other cities and give an identity not just to the hill, but to the city of Santiago. The jury also took into account the landscape of the site, particularly the care with which the park would be treated, as well as the tower's relationship with the statue of the Virgin and the hilltop in general. Finally, the functionality of the infrastructure, which should act as both a telecommunications tower as well as a public space with panoramic views, was considered. See the six shortlisted proposals, after the break. 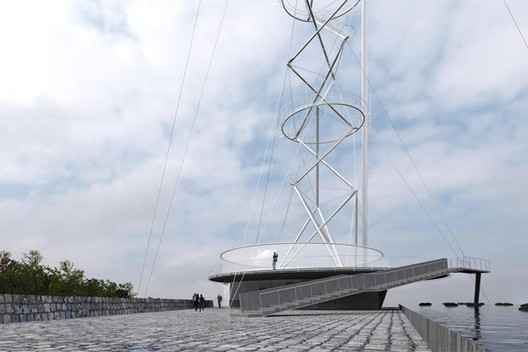 A structure of iconic character and innovative design; an efficient and effective telecommunications tower; and, finally, a new public space for the city of Santiago. Based on these three criteria, the jury selected six proposals, who were announced at a ceremony on San Cristobal Hill attended by Rodrigo Pérez Mackenna, the Chilean Minister of Housing and Planning, Sebastian Gray, President of the College of Architects of Chile, Leopoldo Prat Vargas, Dean of the Faculty of Architecture at the University of Chile, as well as jurors and the participants in the competition. The six placing proposals are:

For the next two weeks, the competition proposals will be exhibited in Santiago (at Palacio Arzobispal) and will be posted on the website of the Chilean Ministry of Housing and Urbanism.