As an accompaniment to their ongoing Sensing Spaces Exhibition in London, the Royal Academy of Arts has produced six wonderful films interviewing the architects involved in the exhibition, unearthing what motivates and inspires them as architects, and what the primary themes of their exhibition projects are.

The above video features both Álvaro Siza and Eduardo Souto de Moura, who both designed their Sensing Spaces exhibits with the other in mind. Siza explains his preoccupation with the joints between the natural and the man-made through his Leça Swimming Pool complex, and the way the rock formations informed his interventions. He also introduces his one-time protégé Souto de Moura's Braga stadium as expressing the same understanding of the natural and man-made. 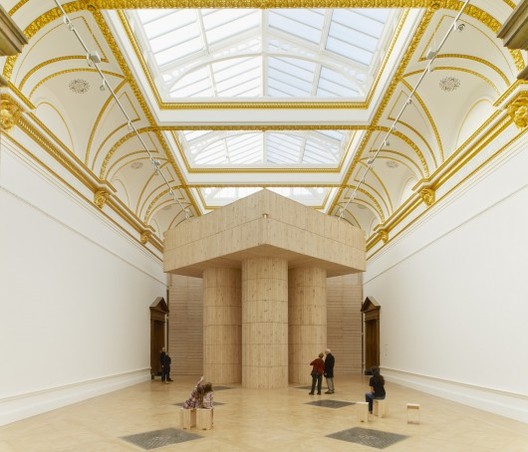 Grafton Architects take us through their Stirling Prize-nominated University of Limerick designs, explaining how they set out to create spaces which would alter the way students viewed their own education, encouraging them to be more active and engaged rather than passive consumers of information. For their Sensing Spaces exhibit, light was the driving force, as they occupy the space overhead.

Diébédo Francis Kéré describes how architecture functions in his native Burkina Faso, as a community-based activity which continues to have life after the project is constructed, as the continual appropriation and adaptation of buildings there is key. He tries to bring this understanding to the RA with his interactive and colorful installation which encourages visitors to leave their own mark on the structure.

Kengo Kuma explains his understanding of architecture as a full bodily experience, focusing on the Japanese concept of "void". On a personal level, he describes how smells such as tatami can remind him of his childhood home; in this sense, his aromatic exhibit is a very personal shared experience.

Li Xiaodong's primary concern is how traditional Chinese architecture can adapt to the onslaught of Western ideals, and how it might incorporate contemporary living. His walls of twigs were a very contextual element in his LiYuan Library, however he reuses them in Sensing Spaces to psychologically remove visitors from the space in London, so they can fully comprehend the Zen Garden at the center of his maze.

Pezo von Ellrichshausen show how their Cien house in Chile makes use of the everyday, the neutral and even the mundane to root people in the space and make them comfortable there. Their installation at Sensing Spaces reflects these ideas, encouraging people to see the space of the RA in ways they had never experienced before; enhancing the understanding of the pre-existing space rather than creating a definitively new one.