Though Cook gained significant international recognition for his unbuilt works with Archigram, he has now also been recognized for his built works around the world. His recent works, including the construction of his Art Museum in Graz, Austria (Kunsthaus) has brought his radical ideas to a wider public audience. He currently practices with Gavin Robotham as part of CRAB Studio (Cook Robotham Architectural Bureau).

With a love for the slithering, the swarming and the spooky, Cook has also continued to teach the next generation of architects; he has been chair of architecture at the University College London's Bartlett School of Architecture, and he continues to hold a number of positions as a professor and lecture around the world.

In his own words, his architecture is "lyrical technical mechanical, even slightly gothic."

In 2004, Cook and other members of Archigram were awarded the Royal Gold Medal by the Royal Institute of British Architects. In 2010 he curated the London Eight, and has curated the British Pavilion at the Venice Architecture Biennale. Cook is currently a Senior Fellow of the Royal College of Art, London. His professorships include those of the Royal Academy, University College London and the Hochschule fur Bildende Kunste (Staedelschule) in Frankfurt-Main, Germany.

CRAB Studio, the firm cofounded by Cook and Gavin Robotham, recently received planning approval for a new Innovation Studio to be constructed at the Arts University Bournemouth in Poole, England. The design packs a characteristic punch of color and energy into the small structure, punctuating the otherwise monochromatic blocks either side with a ray of sunshine. The building is expected to reach completion in 2019.

See all of Peter Cook's works featured on ArchDaily via the thumbnails below, and more coverage at the links beneath them:

THIS WAS OUR UTOPIANISM! : An Interview with Peter Cook

Peter Cook's Advice For Young Architects: "Get Out and Look!"

Peter Cook on How Drawing Enables Architects to Learn, Communicate and Experiment 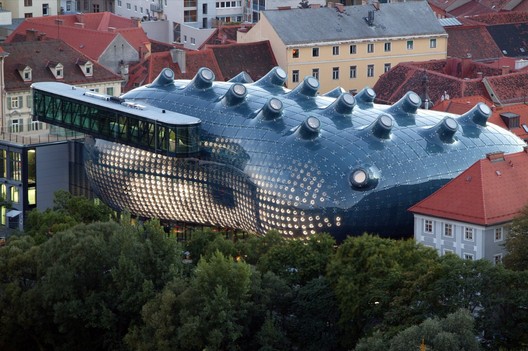