Each December, Design Miami/ commissions early-career architects to build a designed environment for the fair's entrance as part of its biannual Design Commissions program. This year's winning proposal, dubbed "Tent Pile," was designed by the New York-based architectural practice formlessfinder. Its design harnesses the properties of sand and aluminum to create shade, seating, cool air and a space to play for Miami's public.

Interested in experimenting with re-usable materials, formlessfinder focused on two phenomena that they felt were particular to Miami: the abundance of sand and the "tropical post-war modernism distinguished by hybrid indoor/outdoor spaces" that defined the city's architecture.

Tent Pile's cantilevered aluminum roof is emblematic of this and was precision CNC machined from Alcoa 6000 series aluminum, engineered at watch mechanism level. A unique natural anodized finish with a corundum coating was applied during the CNC process to preserve the finish luster and protect it with the hardness of sapphire. This technique was originally developed for Neal Feay's work with Louis Vuitton architecture.

While sand is generally viewed as problematic and destabilizing for architects in Miami, it is used as a stabilizing element in Tent Pile, mooring the lightweight aluminum roof for the cantilever. Being a zero-waste material, it is also completely re-usable after the pavilion's disassembly. The pyramid of sand is sliced in half by a retaining wall that creates more ordered space at the fair's entrance, providing bench seating that is cooled by colder air being drawn through the wall from the sand then distributed by fans.

"We're hoping to create something that people would want to participate in," says Ricciardi, and the result is a structure designed to be occupied and explored, as much as it is to be admired.

The pavilion will create a refuge for the more than 50,000 visitors who come to Miami for the fair each year, as well as for inhabitants of the city's South Beach neighborhood. It will open to the general public for five days on December 4th of this year. 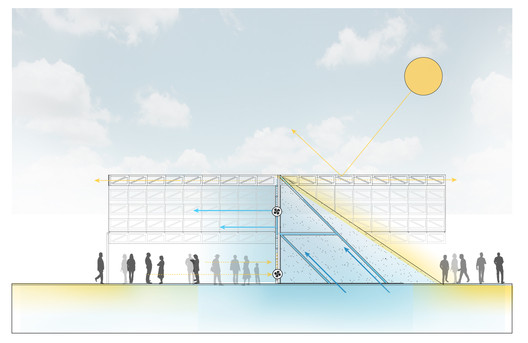