Save
Twin extentions of 2 elementay schools in Courbevoie / BP Architectures 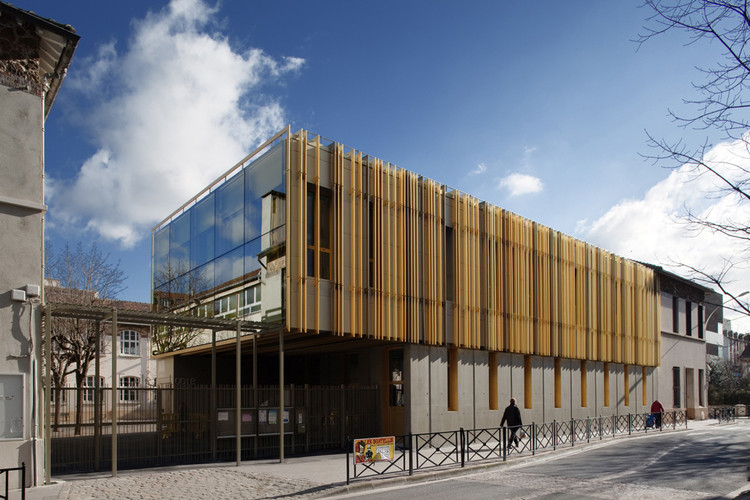 Text description provided by the architects. A twofold accomplishment!

« Once upon a time, in Courbevoie, in a residential district without any real urban markers, two elementary schools shared the same block and the same playground, though not the same school principal. One school was named “Logie” and the other “Anatole France.” As the need for public space grew, the City of Courbevoie decided it wanted an extension, which it thought would be common to both schools. But the BP Agency, which had been allowed to bid on the project, did not see things quite the same way; instead of the ground plan sketched out by the municipal services, BP proposed not one but two extensions.

Two buildings with the same construction, twin structures arranged perpendicular to each other so that the observer has the strange sensation of seeing the same object from two different angles. An odd feeling.

On either side, a deliberately sturdy mineral base to enclose the schoolyard and house the technical premises, servicing areas and bathroom facilities. Above the base, a vibrating, golden metal box housing a floor dedicated to classrooms with a pediment and a library looking out onto the city, turning knowledge and study into figureheads of the school. And in both cases, slanted walls serving as the pupils’ entrance. As a result, the playground area was enlarged and even included a vegetable garden: a solution that made everyone happy!

Our two extensions shimmered. The façades of the metal boxes were covered with anodized aluminium clapboard in three 3 colours: champagne, bronze and gold, giving the buildings an attractive, sparkling look. The structure as a whole produced an impression of abstract vitality.

This is therefore the story of a twofold accomplishment – architectural as well as symbolic. These two structures, with their highly contemporary style, recompose the city block, making it more compact and lively. Architecturally: a bland district is turned into a landmark neighborhood. Symbolically: with these twin extensions, BP could have signed an egalitarian manifesto for the France’s elementary schools, which would not surprise anyone familiar with the Agency’s vision.

2 buildings instead of one

The City of Courbevoie wanted to extend two distinct elementary schools located on the same block in a residential district of Courbevoie. As the geographical proximity of the two schools seemed unusual to us, we suggested freeing our- selves from the ground plan projected by the City and making each extension a continuation of the existing structures.

Thus, we designed two buildings instead of one, which allowed each one to achieve its own optimum functioning as well as town planning to recompose the city block.

The project is part of a heterogeneous fabric without any dominant architectural style, which is typical of the outskirts of Paris. We therefore chose to create two 2 extensions instead of one, and to build on 2 streets of a single block, which offered us the chance to create a strong, structuring identifying element by repeating the motif. Our project helps give an “order”, an identifying, recognizable signature, to the district.

The volumes are constituted by a mineral base (tinted self-placing concrete) forming the ground floor and the wall enclosing the playground. The regular vertical piercing and the vertical layout of the concrete punctuate and animate these façades.

The bases support the metallic volumes forming the floor above including the façades giving onto the street which are broadly lighted by a succession of bay windows of varying heights and covered with a 3-tonne grid made of anodized aluminium wall rails (gold, bronze and champagne) that dematerialize the volume as the light changes. The wall rails have a twofold purpose: arranged vertically in an irregular, random pattern, they serve as a canopy while contributing to the aesthetic signature of the project. These volumes stand out slightly from the bases at a slant to form shelters for the pupils’ entrance to the Logie School and the top of the planted square at the corner of rue Armand Silvestre and rue Cayla for the Anatole France School.

The gables of these volumes, which are entirely glassed in, open widely onto the public space. They enhance the flagship element of the whole school: the library, which is naturally located here in each of the extensions. 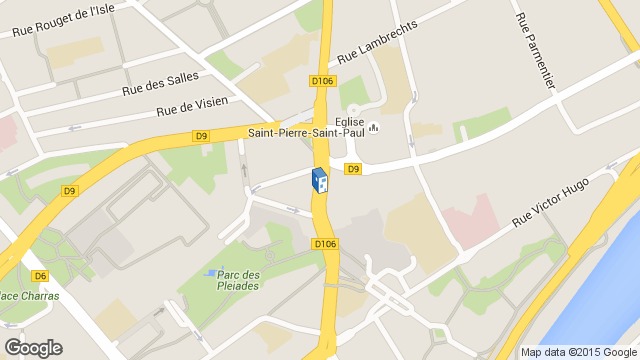