Save
The 4th Gymnasium / HVDN 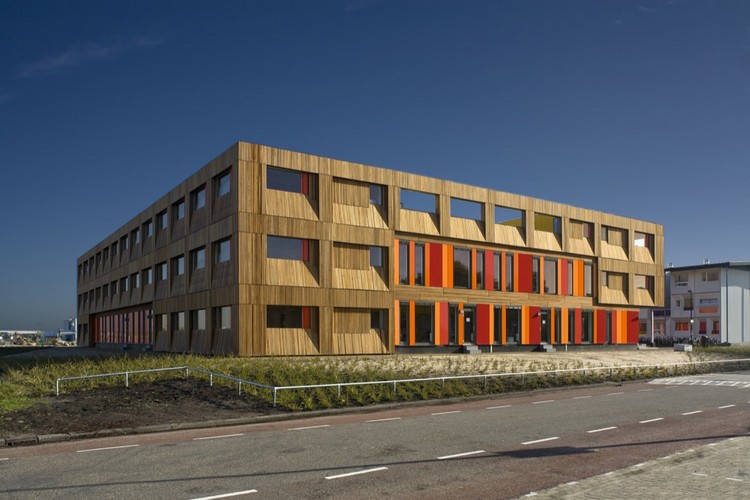 Until recently, the area in the Houthavens was an open, undefined space with scattered placed industrial buildings. Meanwhile, due to problems with the development-zoning plan, the area is temporarily in use. By now it has changed into a lively spot, a “place to be” for the city with several restaurants, artist studios and student housing.

In 2007, it has been decided that the 4th Gymnasium will get a place in the new area of the Houthavens. However, it will take some years before the permanent school is built. Until that time, the coming five to ten years, an interim building will be used. To give the building the same qualities as the new housing estate, it is built in a modular system, in order to make it is possible to use it afterwards on several places in Amsterdam.

To create an enclosed inner space in this open area, the program is situated around a court. The sport facilities with a gym and fitness are situated behind the education building. Besides the court, the 4th Gymnasium has an open schoolyard, a sport field and it can use the present beach. This way all the qualities of the Houthavens are very well used. The 4000 m2 building is besides the profession rooms provided with modern supplies, such as a media centre, an auditory and a large auditorium.

The court is the heart of the school. Both in the courtyard and in the circulation space, which is situated adjacent to the court, movement will take place during daytime. In the inner courtyard seats are made by which the court is an perfect sheltered spot for students to meet. The hallways around the court are used for the movement between lessons, to go from one classroom to another. Much attention has been given to the charisma of this circulation space. This space is made very transparent and provided with bay-windows with study spots and sitting areas where students and professors can study or work quietly.

The facade has two effects that intensify the character of the building. The plinth is made of flat, coloured aluminium panels and continuously follows through into the facade of the courtyard; the plinth as a foretoken of the colour explosion in the court. The wooden facade has been developed more spatially and in depth and gives the building plasticity.

This expressive modular built facade is hard to distinguish from a traditional facade because of a number of innovations, which prevents the monotonous picture of piled up units. By choosing a relative deep outside facade, it was possible to bring on relief. Under the frame, the facade withdraws 20 cm through which the image of two piled up arcades is created. Also the seams between the modules are hidden; the wooden front parts are built from narrow planks, which are placed vertically and on small distance from each other. Through the number of artificial seams that arises, the real seams become invisible. At the plinth and the facade of the courtyard, the seams are hidden behind the rythmic placed coloured aluminium boards of different widths. These creative solutions give the school a permanent and nevertheless dynamic charisma. The solution as strength of the design.

4e the gymnasium shows that modular building has gone through a large development the past couple of years. It is no longer a synonym to uniformity. The school has both on technically and aesthetic area qualities and a level of finishing which is similar to permanent traditional construction. At the same time the building is very flexible in several aspects. It is movable and can be used where is necessary the coming years. And because of the modular construction it can change easily with changing of the user’s wishes as a result of which the life span of the building is extended. 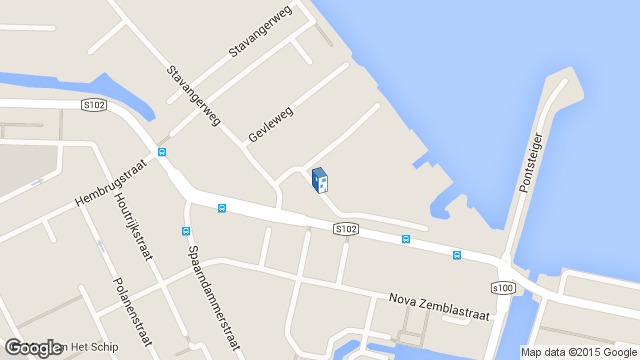 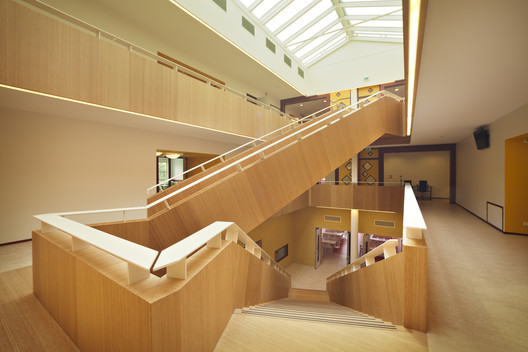