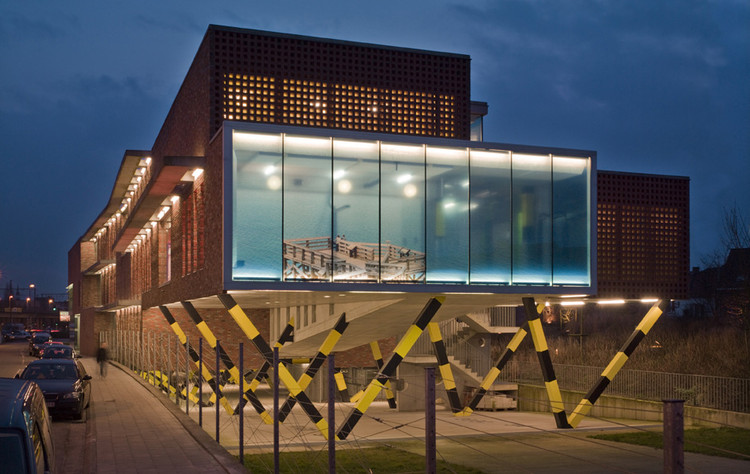 Text description provided by the architects. Concerning the implantation of the building, the volume is entirely concentrated on the street side. This offers several advantages in the field of compactness, economy and energy assessment, acoustic comfort for the offices on the garden side, large distances to the neighboring houses and avoids fragmentation of the open green space. For the acoustic comfort on the street side, patios were added. As a result, a simple image of the emplacement between the built and green space appears.

Because of the excavating cost the lightly polluted soil, the actual volume to be removed is minimized by mooring the parking into a slope. The remaining volume of soil extracted is used to form a landscaped garden and is naturally purified by the use of fotoremediating plants. The open and slightly sloped car park, offers thus, a pleasant solution that is naturally lit and ventilated, with clear views on the garden and other open spaces. Furthermore, the principal interior distribution passage way of the building, runs from the ground level to the first floor along a slope that is parallel to the parking space; This walkway links the public spaces on the ground floor in a natural and spatial manner with semi-public spaces on the higher levels.

As described above, the angle on Noordlaan and Driekoningenstraat is a natural anchor point for the site. It is thus obvious to locate the main entry and reception desk at this point. This desk is laterally backdropped, so that the street appears to be literally drawn into the building, where a bike stall for visitors is also installed.

This corner is on the other hand not appropriate for the access of cars and bicycles of the staff. This access is situated to the long end of the building. The staff parking space is situated under the building, with the bicycle stall next to the vertical circulation; the visitor’s car park is located at the beginning of the slope, and identified by grass tiles. The visitors can enter the facility, from their parking spot, either from the street or from the garden side directly to the lobby. The staff members can reach the lobby or their offices by the means of the internal staircase or directly from the garden.

The project’s developed configuration has been based on the communicative and open character of the building. The fluidity between inside- outside is highlighted in the reception desk zone of the main lobby by the gradation: “outside - covered outside space – inside” and generates openness between the street, the lobby and the garden. Locating the common functions on the upper floor, above the reception, reinforces this notion of openness. By the specific organization of the services, the transverse openings in the circulation area, and by the slope solution of the main distribution, various panoramic views are created. Along with the area where the garden is in contact with the street, all these elements form the base for the open character and the “embracing image” of the design that can be symbolized by the built branch and the green branch embracing each other.

On the second floor, functions that receive a lesser public audience are concentrated. These functions include offices for the Executive Board, staff services. A general meeting room forms the head of the building. The space next to the vertical staircase, can be used as individual conversation areas, by all staff members.

On the first floor, a number of common functions are settled. Directly above the reception hall, the cafeteria that includes a small kitchen, a smoking lounge, and a meeting room. The financial and facility services offices are situated, centrally in the building.

The parallel walls of the corridors are smooth, the flooring consists of concrete tiles and the respective portals of the varied coloured offices are drawn back from the wall line. Because of this the public functions are as if located with their front door to the circulation area: thus the small scale and a sense of intimacy are reinforced.

The lobby hall on the ground floor, regroups the three basic functions, firstly, the employer line, secondly the central administrative cell, which is linked with the counter and thirdly the employee line. From the reception one has a direct view on the garden as well as on the entrance hall. The offices in the left wing of the building are organized around a central patio.

The jobseeker line is organized on the ground and first floor around the central pedestrian sloped walkway, which offers a spatial and physical connection between all the functions of the building. The staff services and administrative support facilities have been situated along the slope.

Firstly the building has been modulated on a 1,25 m, grid, secondly, the circulation area was positioned asymmetrically. Due to this, a large range of possible properties and surface of spaces arises.

The lower level includes storage rooms for archives, some technical spaces, a fitness area next to a covered pedestrian ramp, and to the half open car park for 43 vehicles that is linked to 12 parking places in open air. 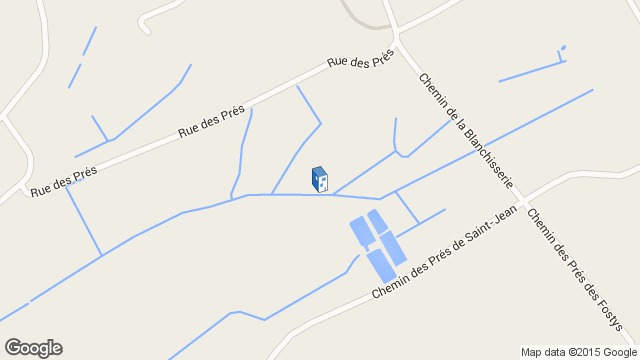 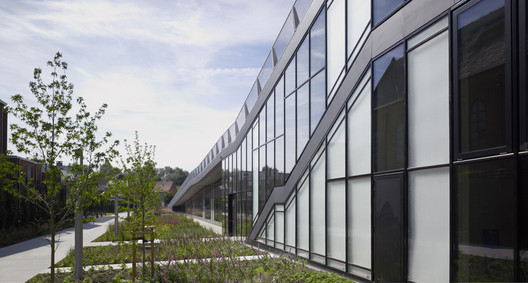