The Crystal Palace was a glass and cast iron structure built in London, England, for the Great Exhibition of 1851. The building was designed by Sir Joseph Paxton, an architect and gardener, and revealed breakthroughs in architecture, construction and design. More on the Crystal Palace after the break... 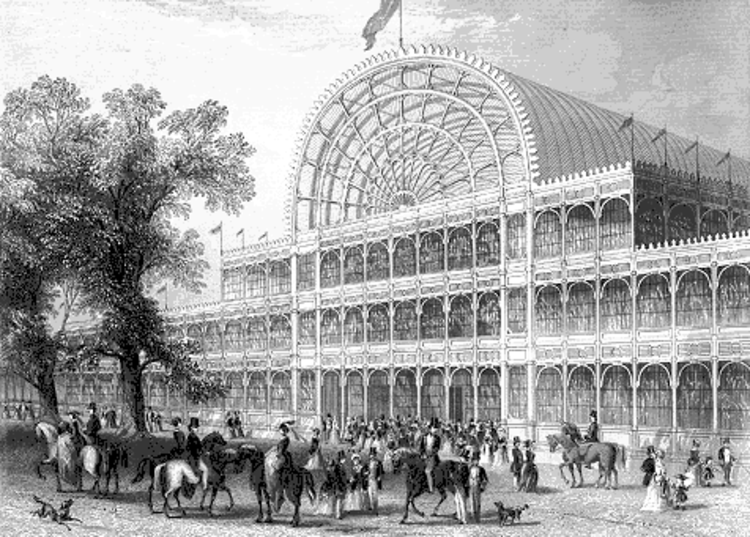 In January 1850 a committee was formed to choose the design for a temporary exhibition building that would showcase the latest technologies and innovations from around the world: The “Great Exhibition of the Works of Industry of all Nations.” The structure had to be as economical as possible, and be built before the exhibition was scheduled to open on May 1st, 1851. Within 3 weeks the committee received 245 entires, all of which were rejected. It was only after this that Paxton showed his first interest in the project.

Already a famous gardener at the time, Paxton experimented extensively with glasshouse construction. Using combinations of prefabricated cast iron, laminated wood, and standard sized glass sheets, Paxton created the “ridge-and-furrow” roof design. In 1836 this system was used for the first time in the “Great Stove” - the largest glass building at the time.

Paxton proceeded to visit Hyde Park, where he quickly doodled his famous concept drawing of the Palace (the sketch is now held in the Victoria and Albert Museum). The drawing included all the basic elements of the building, and within two weeks all calculations and detailed plans were submitted.

Paxton’ design was based on a 10in x 49in module, the size of the largest glass sheet available at the time. The modular system consisted of right-angled triangles, mirrored and multiplied, supported by a grid of cast iron beams and pillars. These basic units were extremely light and strong and were extended to an incredible length of 564 meters. The design was also influenced by Paxton’s passion for biomimicry; he drew inspiration from the giant leaves of the Victoria Amazonica waterlily.

Impressed by the low cost proposal, the committee accepted Paxton’s innovative plan, leaving only 8 months for construction, which commenced immediately in Hyde Park. 5000 workers handled more than 1000 iron columns and 84,000 square meters of glass. All parts were prefabricated and easy to erect, and every modular unit was self supporting,  allowing the workers freedom in assembling the pieces. Thanks to Paxton’s simple and brilliant design, over 18,000 panes of glass sheets were installed per week, and the structure was completed within 5 months.

"This day is one of the greatest and most glorious of our lives… It is a day which makes my heart swell with thankfulness… The Park presented a wonderful spectacle, crowds streaming through it, – carriages and troops passing… The Green Park and Hyde Park were one mass of densely crowded human beings, in the highest good humour… before we neared the Crystal Palace, the sun shone and gleamed upon the gigantic edifice, upon which the flags of every nation were flying… The sight as we came to the centre where the steps and chair (on which I did not sit) was placed, facing the beautiful crystal fountain was magic and impressive. The tremendous cheering, the joy expressed in every face, the vastness of the building, with all its decoration and exhibits, the sound of the organ… all this was indeed moving"

When the exhibition was closed 6 months later, the structure was disassembled and then reassembled in the south London suburb of Sydenham Hill. Tragically, the building was destroyed in a fire in 1936.

Paxton’s ingenious design created an unprecedented exhibition space. The construction, acting as a self supporting shell, maximized interior space, and the glass cover enabled daylight. The method of construction was a breakthrough in technology and design, and paved the way for more sophisticated pre-fabricated design.