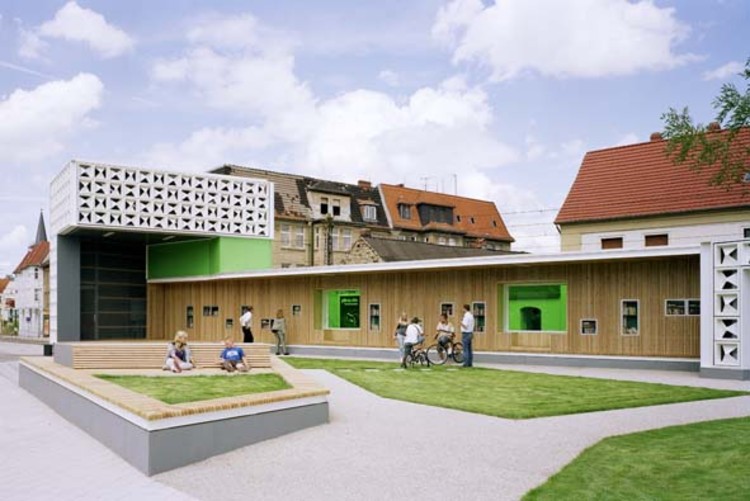 Text description provided by the architects. The open air library, we established in 2005 in an abandoned district centre in East Germany has been started with a public intervention, using beer crates as building material: On the fallow site of the former district library a 1:1 model of a possible Open-Air-Library has been build up for two days and the shelves have been filled with book donations. The residents took over the energy of the temporary project and opened up an informal district library near the site which now offers more than 20.000 books. The outdoor space as an addition has been designed together with the residents and opened in June this year.

The southeast of Magdeburg belongs to these urban areas in Eastern Germany which are characterized by abandoned industrial plants and fallow land. A post-industrial city landscape with high unemployment and figures of vacancy up to 80%. This also concerns the district Salbke. The spatially intact city center stands almost completely empty. Its image is shaped by pasted over shop windows and fallow land. The encountered reality served us as a resource and starting point for an urbanistic experiment.

In collaboration with the local residents the fallow zones of the former village library are developed as a “bookmark”. Remembrance, history and narratives provided the background for the “re-occupation” of the abandoned expanse. An old empty shop was used as base for a temporary library and camp for a building workshop. There, books were collected and design strategies for reclaiming the site were developed.

With more than 1.000 lent beer crates the favorite draft was constructed together with the locals in the scale 1:1 . The shelves of the temporary library were filled by the residents with books. A festival followed with poetry slam and readings to prove the everyday suitability of the new urban situation. Since 2005 more than 20.000 books were collected and the local residents pursue a reading café quite near the site. But it took some years to organize the money to build this so called "bookmark" for real. Since 2006 the project is part of a research project of the federal government and is funded as a pilot project for realization.

In June this year the outdoor-library opened officially. The residents which take care for the reading-café as well as for the open-air-library call it a “library of confidence”: There is no registration needed. You can just take a book away and should bring it back voluntary or at least another one. The shelves are never closed; you can go there and take a book when ever you want - 24 hours a day.

As another communal function a stage is included. This is used by the elementary school for theatre plays, as well as for public readings, for concert-gigs of local youth bands and other cultural and communal events.

Beside the social aspects, the architectural kick is the re-use of the modernist facade of the old HORTEN warehouse of the City of Hamm , which has been knocked down in 2007. 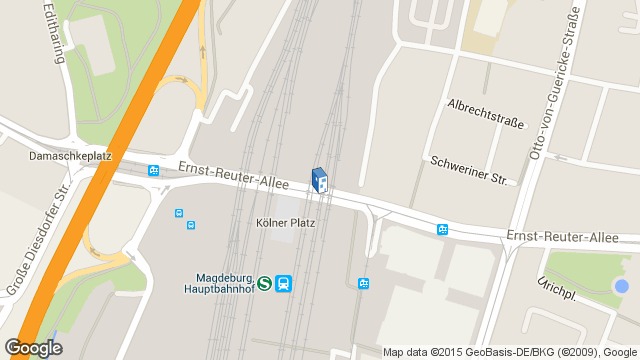 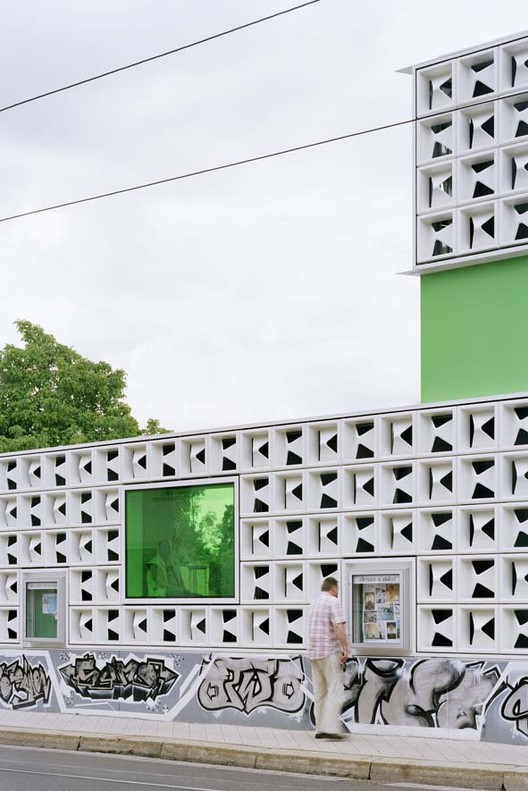