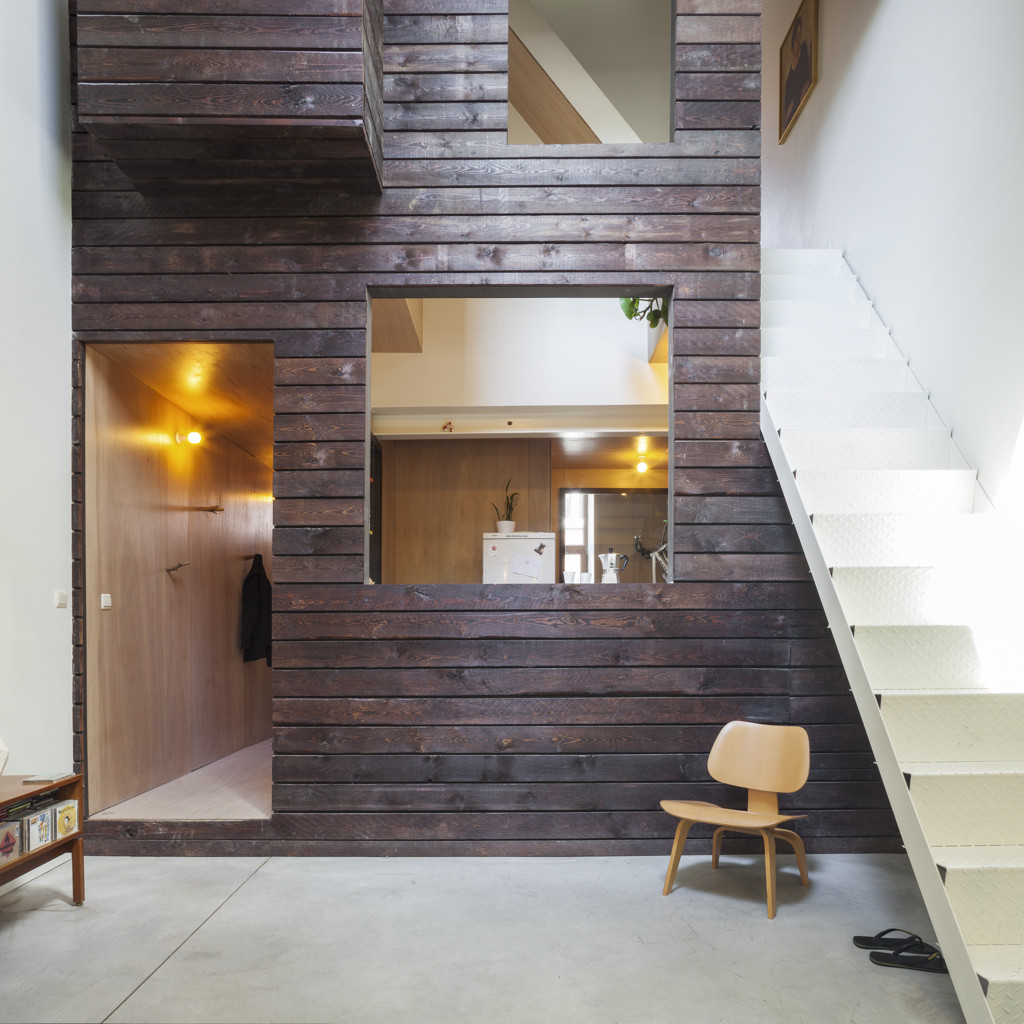 Text description provided by the architects. A narrow dark facade, a simple house in the row - nothing suggests any sense of space which hides behind this facade. A twist on the ancient doorbell and the door swings open shortly afterwards. Immediately you stand face to face with a wall of rough wooden planks and Tijl who welcomes me. Through a door in the wall I enter a wooden house. A house in a house. The construction delivers handsome vistas. This is only the first surprise. The house then opens upwards to the ridge where the light shines through different windows. The living space on the groundfloor focuses on the garden with a window over the full width of the rear.

"Why a house in a house? In the first draft we also had drawn a house behind the house. The original idea was to build three houses on one plot, but this idea was encountered by the department of urbanism. So we started looking for another roof shape. The plot has a peculiar shape with a kink in it, so we decided to follow that kink. By placing the rear window one meter beyond the kink and perpendicular to the garden, you feel that unique form in the interior" says the architect. Tijl and Indra wanted the living room to be very open and close to the garden. Circulation room, kitchen, bedroom and bathroom were given a place in the house in the house. In the entrance there's a storage provided in this timber construction. Convenient to bicycles and trash. In the wall itself there's a storage space designed for the washing machine, so that it is a functional element.

"When you ad a rear building to a townhouse, you always have the problem that it is very dark in the middle of the house. By taking away a piece of the ceiling, additional light to the inside could be achieved. Thus, the window on the first floor is visible. We then went looking for a nice interpretation of open space. To create a familiar and pleasant shape, we have chosen to make a house out of it" said the architect. The house is built of rough wooden planks that accentuate  the formal character. That planking is a strange and unusual material in a home. By choosing a less everyday material one doesn't make the association with the kitchen behind it. It is an object in itself. It is an object but also a real house. When you sit down at the table next to it, you get the feeling that you are on an inside terrace next to a facade. Behind the first door and window opening there's the kitchen. Because the kitchen is somewhat higher, it gives a different feeling. Moreover, it is nice that you can keep in touch while cooking, to says Tijl. From the doorway at the top slides a white metal staircase. The game of stairs through the space, providing a unique sight. A bit like the Dutch artist Escher, Martin suggests. Escher is known for his often impossible constructions and mating surfaces and geometric patterns.

There's a window opening with a protruding wooden bowl, like a small balcony. Missing perhaps only some planters? “There will be taken care of”, Tijl ensured us. The wooden balcony is actually a desk. A very nice place to sit. From this vantage point you have a view of both the open loft with downstairs the kitchen and the living room and - by the shape of the plot - you have sight of the rear garden. So you stay connected with everyone. "Later we'll turn the roof into a green roof garden that already begins from here. We have transformed our hobby room into a nursery because we've just had our first child“. The bedroom of Tijl and Indra is situated under the roof. Again you get the feeling of a home in the bedroom. Here was the architect again puzzling with the available space. A Velux window providing light and extra space for the bath underneath. Behind a little elevated area is the shower. A light box right at the top provides extra light to the bottom. Zenithal light is much more intense than light through a window, we learn.

Architect Maarten Vanbelle is a fellow villager of Tijl. They have known each other for years. Maarten drew the design together with Dries Vens and Tijl took the renovation on his behalf. The entire renovation lasted 4.5 years. "This is a bit of the big story of this house. I have practically done everything myself except the roof, the floor in polished concrete and the development of the large window. I was here to stay, even during the renovations. It was very nice to work with Maarten. The previous house where I lived, was rather a classic renovation, "says Tijl. "For an architect it's also nice to see that your design, in which you inserted a lot of time, afterwards gets completed and used in a fun way. The choice of furniture is very important for the atmosphere that you live in. The transitions in a house are very important to us. Every step you take should be different. When standing in the void, you get a very airy feel. You constantly tend to look up. A little bit further your gaze automatically gets turned towards the garden. "

Tijl has a passion for beautiful furniture. He calls it his half hobby. "At once this became an obsession and then you begin to make choices. It's not all that cheap and before you know your house gets crowded. The living area downstairs is perfectly furnished. You need to give yourself time to do something in this matter. Indra also is an architect and she introduced me to the Ghent furniture Van den Berghe - Pauvers. We've bought these cabinets in the living roomat the cessation, so we could do a real bargain. The salon of the '60s with teak frame – got from the grandfather of Indra – is a design by Danish designer Grete Jalk. Around the wooden table we've placed butterfly chairs by Arne Jacobsen (Fritz Hansen) and the lovely white chair the 'Rabbit Chair "of the Japanese architect Sejima of the architecture firm Sanaa." Cabinets are hard to find in this house. Books and records are sorted on a large open shelf in the living room. In the kitchen and other rooms there are even more racks, namely the metal racks of 'String' in the original colors yellow, red and blue. The turntable brings even more nostalgia. So cozy, and what is it long ago that creaking sound of a needle running in the grooves of a record. Decor and design, the picture is correct completely.