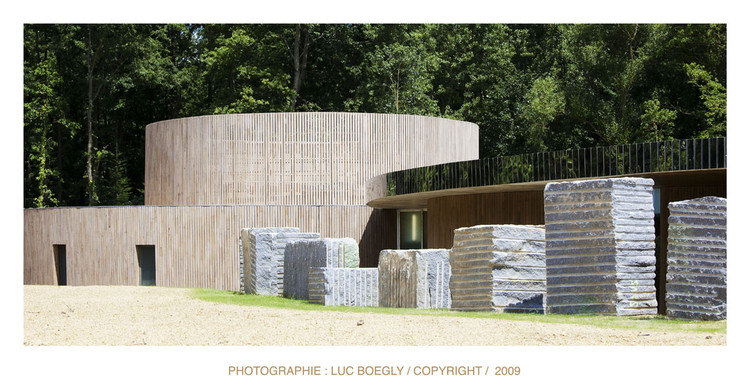 Text description provided by the architects. FROM A FREE THINKER CEREMONIAL TO A MASS PRACTICE

Largely marginal in the 1970’s, cremation has experienced a slow but regular progress for the last 20 years, reaching a 29% rate today. In 2030, cremation will become the main funeral practice in France, outreaching the symbolic 50% rate. This true reversal of traditions underlines the progressive spreading of cremation, both geographically, outside major urban centres, and socially, religious and older people are less opposed to cremation.

If cremation is becoming a major practice on a strict number basis, some of its aspects are still influenced by former perceptions. In many ways, it is still evocating the roughness and the severity of a ceremonial for free thinkers and reprobate people. The difficulty of combinating cremation with a truly respectful and solemn ceremony still remains. It is particularly perceptible in the architectural layout of crematoriums. They are not well conceived, not very appropriate to this difficult and particular situation; they make the mourning process even more complicated and painful.

In the continuity of what have been made in Northern Europe, a reflection on the architectural quality of crematoriums in France is more than needed.

Far from being a detail in crematorium conception, architecture is a key step in the invention process of a dignified ceremony.

RENNES MÉTROPOLE CREMATORIUM, THE RESULT OF A COLLECTIVE APPROACH

In this very particular and stimulating context, the group of agencies PLAN01 got the opportunity to work on the crematorium project in Vern-sur-Seiche. The innovative organisation of the group- 4 architecture agencies sharing a same workspace and working together on important projects - results in a relevant architectural answer.

Over the group meetings held during the first two years, the ten partners had the opportunity to share their first impressions, to clear the eventual apprehensions, to refine their approach of the project and develop their first ideas.

This collective way to proceed has facilitated the elaboration of a strictly secular space that does not expel anyone, without denying the needs of emotion, solemnity and spirituality shared by everyone.

The circle is repeated throughout the spatial configuration and its many declinations shape both the landscape and the building. From the clearing to the shape of the rooms, the circle is a recurrent theme. This spatial layout referred to life circle, constellation, but also to Stonehenge or Land Art works.

Above all, it can be interpreted in many philosophical, religious or cultural ways. Completely non-denominational and easily accessible to all, the crematorium rises up, solemn and imposing. The references to daily life vanish, creating a singular experience where orthogonality does not rule any more.

This layout is also a reaction against monumental architecture. Unlike a mausoleum, the crematorium does not overwhelm users and nature.

Although monumentality is dismissed, the need of solemnity is not rejected, though. On the contrary, the choice of simple shapes and materials provides an integrated landscape of peace and tranquillity. It creates a dignified and serene area.

A “LANDSCAPE BUILDING” OR ARCHITECTURE AS LANDSCAPE

The first problem to be addressed was the parking issue. This very particular situation requires to escape from the mundane world of the automobile. The building fits into a vast clearing, surrounded by trees and fields. Small car parks are discretely included in those wooded areas. By leaving theirs cars in those special areas, mourners can detach themselves from the outside world and enter a place entirely dedicated to ceremony and meditation.

The architectural reflection on access was influenced by the idea to avoid imposing one single common path leading to the crematorium, but rather to create a large number of possible approaches. Thus, the various pathways encourage a gradual progress from the external environment towards internal intimacy, from outer noise to inner silence.

After crossing a broken enclosure formed by thick granite blocks (extracted in a local quarry), users go down a gently sloping planted section that converges on the building standing at the end of a large curved open-air horizontal space. The building itself appears like an enormous disc floating in the centre of the clearing and bringing together the various elements of the programme. It creates an impression of fluidity between internal and external spaces.

The large central hall is the key piece in the people circulation system. There are no corridors but only flowing spaces, mainly illuminated by natural light with framed external views. This space has been conceived in order to reduce the feeling of being shut in. It‘s the place where members of the families get together, where they can decide to speak or not, where people can be overwhelmed with emotion.

There are two different sorts of area opened to the public: the rooms where the ceremonies take place and the waiting rooms.

The two ceremonial rooms are large circular spaces with dedicated patios that bring light and air. This special layout design reconciles the contradictory need for openness and intimacy. Each room is complemented by draperies that enhance the acoustic characteristics.

The waiting areas are located as ante-rooms to the ceremonial spaces. Their walls are made of glass that can be completely hidden by translucent curtains, so that the levels of intimacy and openness can be controlled. This system also gives the possibility to avoid embarrassing encounters between two different families.

Not just a building, a complete site. With its grass-covered roof and large exterior pool, the project blends into the vegetation of the landscape. It is also an integral part of its geographical surroundings through the use of local materials such as granite and wood.

By incorporating various current international frames of reference (HQE, Habitat and Environment, Effinergie, LEED, BREEAM, etc), PLAN01 has defined 7 criteria for optimising the crematorium’s environmental performance. In this project the environmental issue is treated as a springboard for innovation, not as a constraint, as an underlying principle, not just as a ‘green veneer’. 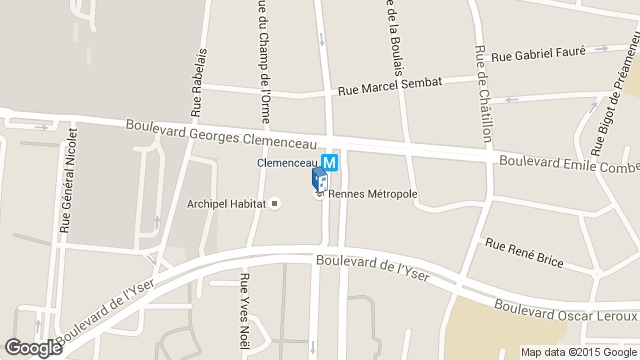 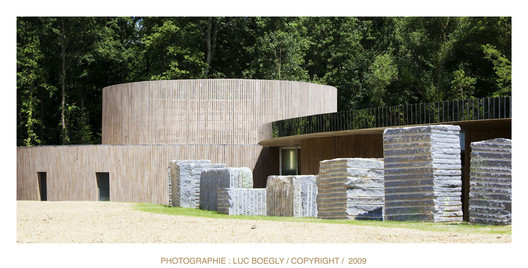