The city of Yatsushiro is known in Japan as a home for exemplary architecture - the legacy at least in part of Artpolis, a plan by the government of the Kumamoto Prefecture to seek out a range of talented architects to design cultural buildings in the cities of the region. Though the Artpolis scheme has been running for the past 22 years, perhaps its most successful building was completed back in 1991, with the construction of Toyo Ito's Yatsushiro Municipal Museum. 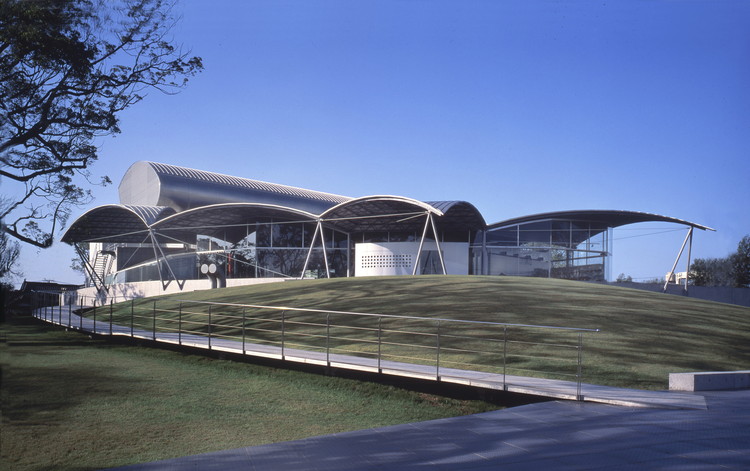 The selection of Toyo Ito for this particular project was seen as particularly risky, considering his commitment to contemporary and often technological design, as the site is directly opposite the historic Shohinken Villa and near to the ruins of Yatsushiro Castle. However, Ito did not shy away from his progressive convictions, designing a sleek glass pavilion with a complex, billowing steel canopy.

Though the museum contains two floors, the earth around the building was raised into a mound to give the appearance of a single story structure sat atop a small hill. Above the undulating roof is a horizontal half-cylinder, which provides storage for museum pieces. The logic for this move was that the high water-table on the site would make the common practice of placing storage in a basement too much of a risk.

In his thesis "Architectural Publicity in the Age of Globalization", Ari D Seligmann describes how the Yatsushiro Museum fits into Ito's 'wind series', a collection of buildings - including the Tower of Winds - in the late 80s and 90s where his main themes were "transience and openness". The Museum also develops the structural style which he used in his personal home, the Silver Hut.

Fellow Japanese architect Kengo Kuma praised the museum, saying that it was "not only a critique of the 'heavy and strong' Western model of architecture, but also of these simplistic 'traditional Japanese' buildings, which are far removed from the true spirit of Japanese tradition."