In an effort to saving the crumbling 15-acre Pier 40 on Manhattan’s Lower West Side waterfront, seven downtown youth sports groups have released a concept plan prepared by WXY Architecture + Urban Design to open up 40% more space for more fields and park space on the pier, mainly by creating a new development site for two new, 22-story residential buildings in an area along West Street directly in front of the pier. The development approach would open the existing 800-foot-long pier shed building that encloses the park fields to improve connections and access between the Hudson River, the pier, and the park. The result knits together leisure and recreation amenities with a premier waterfront destination. More images and architects' description after the break.

Hudson River Park, on the Lower West Side of Manhattan, includes a notable pier with playing fields and a large shed building, known as Pier 40. As steward of the area, Hudson River Park Trust seeks a thoughtful redevelopment of Pier 40 that will generate revenue sufficient to repair and maintain the park. Visions for the development have been submitted by several groups.

The proposal opens up increased parkland, scenic views and daylight, adding an esplanade at water’s edge. Rather than high-traffic retail and entertainment uses recently proposed (and rejected), the group’s proposal recommends new residential buildings for about 900 people as part of a mixed-use project that will bring sufficient revenue and moderate activity to the area. The plan seeks to open the park to the river and the pier to the park, with a variety of new park activities including more ball fields. 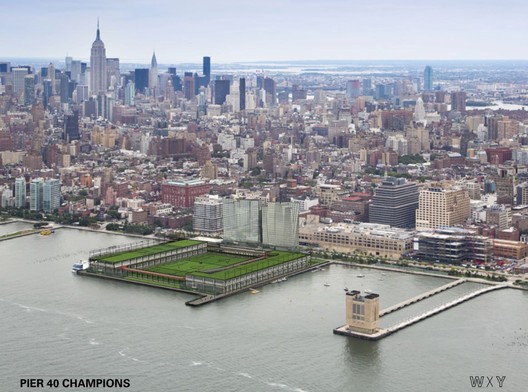