Coop Himmelb(l)au has come up with an incredibly unique design for the new Grand Theatre and International Culture & Art Center for Changsha, China. The site is located on the northeastern side of the newly created Changsha Meixi Lake in the Daheexi District, with the design engaging both land and water with a flowing and undulating white form of enormous scale. The architects hope to create a new cultural center that interacts with the existing natural landscape, not only visually, but scientifically by running on alternative energy sources and efficient passive energy systems to reduce environmental impact.

The architects' description after the break...

The beautiful landscape scenery of Meixi Lake drives the overall concept of the project by positioning the architectural elements like precious objects into an urban Chinese garden where the elements of water, stones, hills, bridges and flowers are transformed into significant urban shapes animating and vitalizing the daily life of the entire Daheexi District. The proposal therefore “thickens” up the surface of the ground and transforms it into a flexible and lively landscape, integrating all the service and leisure facilities to provide an attractive and continuously active support for this dedicated cultural site. The naturally shaped waves of the garden on the roof also provide sport and recreation possibilities that include refreshing water surfaces and allow light and air to pass through into the building in a controlled manner.

Directly on the ground and on the landscaped roof surfaces a pedestrian walkway system interweaves the individual building parts with the garden landscape and the important infrastructural hubs like the subway station of line 2 at the northwest corner of the new development. An open air stage on Ceremony Island seamlessly merges with the connecting bridges to provide a one-of-a-kind functional layout for a bridge.

Following the walkway in the western direction it offers access to the optional Office and Apartment Extensions and finally to the optional 5-star highrise Hotel at the Western end of the site. The left wing of the Open Air Stage bridges from West to East connecting the bar and restaurant of the Grand Theater which can be accessed by the public. The walkway extends to the East over the garden landscape to link the lecture halls, exhibition spaces & the Art Training Center. The waterfront promenade closes the loop between the west and east end of the development opening with a generous plaza in front of the Grand Theater.

The Grand Foyer reflects and highlights all of the advanced aspects of an Opera House with bridges, stairs and platforms already performing as a 3-dimensional pre-stage to the Grand Hall. The state of the art equipped Opera Hall provides a multifunctional layout to easily switch between eastern and western as well as traditional and modern stage designs. In the evening the Grand Theater impresses viewers as an eye catcher, glowing in light and communicating the performance inside and out all over Meixi Lake.

Unfortunately, this original design lost to Zaha Hadid's, which began construction last October. Both designs utilize sweeping curves to create strong relationships between structure, landscape and city in order to envision a new cultural hub for the Chinese city of Changsha. 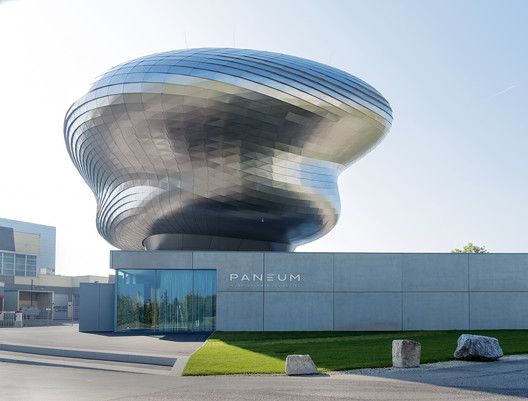