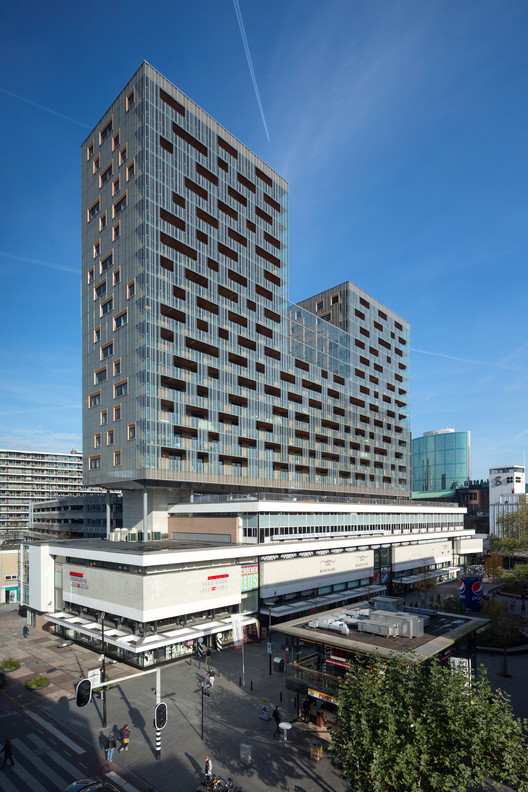 Text description provided by the architects. De Karel Doorman consists of the renovation of a shopping building: Ter Meulen and an added residential building. The new residential building is up to 70 metres in height and includes 114 apartments. It is built on top of the Ter Meulen building in Rotterdam. This is an unusual project as the new building literally rests on the columns and foundations of the existing structure. The only additions are a pair of concrete lift shafts which also provide stability. The construction technique is unconventional for a project in the Netherlands, as the main structure is in steel instead of heavy stone-like materials as concrete and limestone. The existing Ter Meulen building is restored to its original conditions and once again houses three shopping floors. Parking facilities are provided on the second floor and on the roof of the existing Ter Meulen building. In this way 114 appartements are added. In the heart of the city center of Rotterdam.

The Ter Meulen building has a special place in the hearts of the inhabitants of Rotterdam. It was constructed in 1948 as a shopping centre for Ter Meulen, Wassen and Van Vorst and designed by Van den Broek and Bakema. With its extensive glazed facades the building was remarkable in its time for its transparent appearance. “See and buy” was the motto. The building was partly demolished and redeveloped in the 1970s and 80s, including the addition of two shopping floors. The distinctive corner terrace was sacrificed to make way for a new entrance. Ibelings van Tilburg architecten proposed not to demolish the building, but to restore the Ter Meulen building to its original condition. Both of the in 1977 added floors are demolished to make place for the new appartment building.

At the time of the original construction of the Ter Meulen building the demands for constructural calculations were far more higher then nowadays. While revisiting the calculations it appeared that the loadbearing capacity of the structure was well above what was needed in the original design. In the original design, stability was achieved through a portal system with columns and beams. For the new design the construction team came up with the concept of two new concrete stabilising cores, not only providing stability to the appartment building but also linking the old and new structures together.

This approach allowed the addition of 16 new floors to the existing building. The maximum weight of the new-build was 250 kg/m2, including; the walls, facades, ceilings, installations and pipework. This ruled out the use of a standard residential construction system with concrete floors and walls. A traditional system like that can have a weight of 1,000 to 1,200 kg/m2 of floor area. Therefore it was decided that the main loadbearing structure should be in steel. A respectful approach is the starting point for the restoration work as well as for the design of the residential building. While the Ter Meulen building itself is restored to its original conditions, the design for the new addition is abstract. The new appartment building consists of a glazed external skin, with a print. The loggias and galleries are located behind the glazed shell. The façade of the apartments themselves is clad with Oregon pine.

One effect on the enviroment of adding additional floors is obvious: The original building is saved from demolition and thus waste is prevented. Adding additional floors above the roof is also an intesive form of space use, the roof now is used as ‘second’ surface level. In addition, the new floors added value at the urban level. The retailers are located in the basement, on the ground floor and the first floor. Each floor also has a mezzanine, bringing the total up to 11,500 m2 of retail area. The glazed partitions on the ground floor were restored to their original state. The original Ter Meulen building contained only 3 shops, but the renovated premises will offer space for many smaller retailers. Using one of the three carlifts, drivers can park their vehicles on the second storey with its mezzanine floor, or on the roof. This method allows 156 cars to be parked within the building. The 114 apartments are spread across seven connected floors. Nine floors in the western tower and six in the eastern tower. A sheltered roof garden for communal use is located at the 10th floor (40meters up) and is situated between the two volumes. Between these two volumes, 40m above ground level, is a roof garden for communal use. 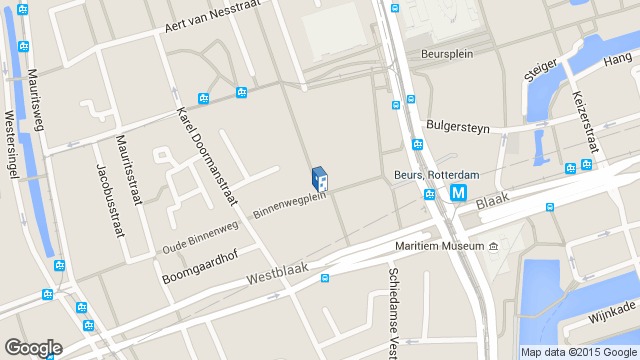 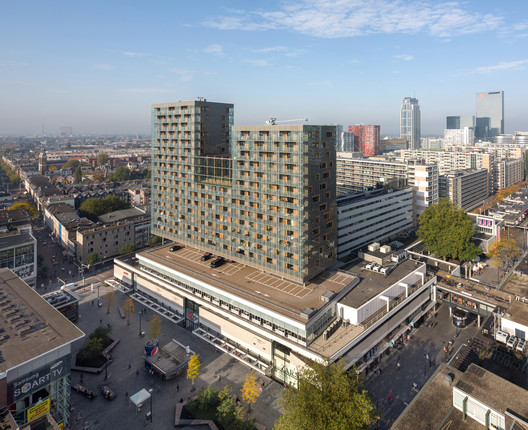