It may look unassuming, but this sleek black box is the culmination of a two-year long collaboration of more than 50 students from 7 different faculties of the Budapest University of Technology and Economics. Initially envisioned by two architecture students and built for the European Solar Decathlon 2012 in Madrid, the goal of Odooproject was to encourage a new sustainable life by designing a house where as much time as possible can be spent outdoors.

More information about Odooproject after the break... 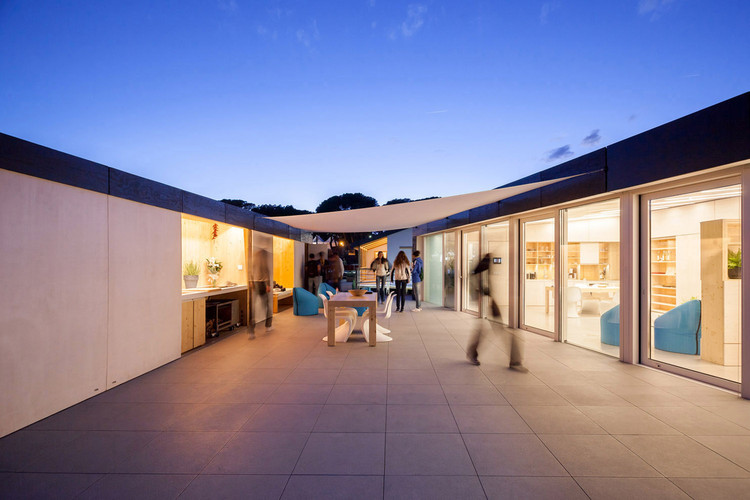 Odoo’s square plan has two primary elements: the north half enclosure and the south half outdoor terrace, bordered by the ‘summer wall’ to the south. The design allows comfortable living inside or outside throughout the year as the seasons allow.

The enclosure is a compact form, well insulated and airtight, to maximize material and energy efficiency. The building is almost monolithic, save for the south façade, which is entirely triple-glazed. Large sliding doors play down the division between the indoor and outdoor living spaces. Internally, the open plan space can be adapted using the mobile and flexible built in furniture, instead of walls, making the house easily presentable as a pavilion.

The secret to making the terrace habitable lies in the ‘summer wall’ stretching along its south border. Providing shade during the day, the thickness of the this wall houses the amenities necessary for living outdoors. Hiding inside the wall you can find storage for terrace furniture, a fully equipped outdoor kitchen and a movable open fireplace. The wall also conceals the workings of the HVAC and passive conditioning systems.

To provide a comfortable environment, as efficiently as possible, the house uses both active and passive systems. The compact form of Odoo reduces heat loss, while its organization means it has two south-facing facades. The glass façade exploits solar gain, to heat the interior during the winter, and the solar panels on the ‘summer wall’ generate power from the summer sun.

Due to the lightweight nature of the pavilion, thermal mass is provided by a unique system of water pipes. During the winter solar gain heats pipes in the floor, the water is then pumped into an insulated tank and can be used to heat the house at night. In the summer months, sprinklers dissipate the heat from roof after dark, allowing the system to use it as a cooling mass during the day.

Odooproject’s sleek black looks take their queue from the array of solar cells, covering not only the summer wall, but also the roof. Combined, these panels produce three times more energy than the house would consume annually.

After the Solar Decathlon, Oodoproject was reassembled on the campus of The Budapest University of Technology and Economics, where it currently resides.