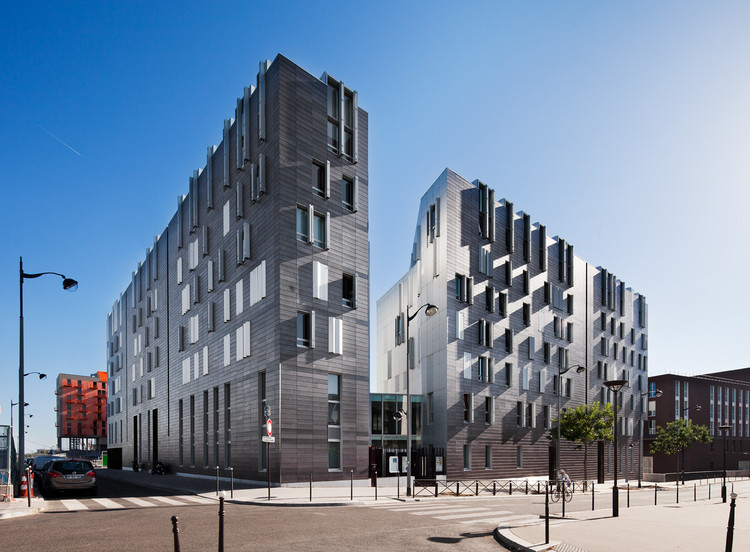 Text description provided by the architects. There were two challenges in designing the M9-C project: having to mix four different uses - school, culture, housing and parking - on one complicated plot; and addressing the issues of density and shaping the city on the edge of Paris’s 13th arrondissement. By superimposing the four projects on top of each other, the project connects the recent “upper” city landscape above the railways tracks leading to the Gare d’Austerlitz and the ground-level lower city along Rue Chevaleret by means of a lift for pedestrians. The project’s distinctly urban outline, the varying styles of façade (smooth along the line of the urban development zone; pleated, folded and divided towards the centre of the plot) and the strict structure due to the immediate vicinity of the railway tracks make this a unique building. It is a combination of architecture and civil engineering, concealing its complexity to allow the variety of public and private space, the attention to detail and an element of surprise to shine forth.

It was impossible to spread the various elements of the project over the whole plot. Every team participating in the competition realized this - [bp], the winners, but also Francis Soler, K Architectures and Gaëtan Le Penhuel.

A public lift connects Rue des Grands Moulins to Rue du Chevaleret, since the project is at the end of the flat concrete area over the railway tracks leading to the Gare d’Austerlitz. This is how it deals with the problem posed by the slope.

Seen from Avenue de France, the building looks as if it’s closed off, wrapped in a uniform cloak of chocolate-coloured bricks that twinkle in the sunlight. But from Rue des Grands Moulins its complexity and variety are dazzlingly apparent. The theatre’s stone facing contrasts with the brick and metal of the other parts of the building. The outline of the cornice follows urban planner Bruno Fortier’s recommendations for the Masséna-Chevaleret area, in particular the Buxy stone used for nearby public buildings (street-cleaning services and a holding wall).

As for the building’s outside upper reaches, the project has opted for varnished brick shingles in order to ensure some continuity with the nearby buildings by Brenac + Fonzalez and Yves Lion. Short specs registration has been carried out on the brick, stone and aluminium elements to match them heightwise and widthwise and thereby ensure that they are different but also form a whole.

Coexistence
The outdoor areas and utilities are shared to ensure this intermingling. The school’s emergency exits are at the same time the entrances to some of the flats. As for the stage of the theatre, along with the spring box and other insulation materials, it is designed as a box within a box to isolate it from its potentially restrictive surroundings. In addition, one of the access ramps to the car park runs along the auditorium and acts as a buffer.

On the playground side, the flats are designed as a series of steps to protect people’s living space from the commotion of the playground. Conversely, canopies ensure that the children are protected from the kind of malevolent acts people are always afraid of. A safe distance is maintained without any need for netting.

The arrangements also offer sun protection, at least during the summer. The façades of the flats have folding shutters that provide the same heat insulation and give a uniform appearance to the centre of the plot.

School
Overhanging roofs project some way out over the school playground and protect pupils from any objects that might fall from the flats above, as well as creating a covered playground with sculpted ceiling ridges. The playground is separated into two sections – primary and nursery – by wood panels and big flowerpots. It is a delta shape pointing towards the south of Paris and culminating in a curtain of vegetation that will gradually colonise the small holding wall.

The classrooms are bathed in light, painted in discreet colours and equipped with simple, slightly seventies furniture. Green and orange are the dominant colours in the corridors and they are also dotted around the classrooms. Wood resin panels protect the walls. Taken together, these details bring a sense of variety and uniqueness to the project.

Flats
There are three entrances to the flats. Although they comply with all current fire, access and thermal standards, they are ‘unusual’ in terms of their height, layout and floor area compared to normal social housing projects.

The kitchens are generally half-open, with a bar that looks into the living room. The living room stretches into an adjacent room that can be closed off to make an office or a bedroom thanks to a semi-flexible curtain. The corridors in each flat run along the windows to ensure they are brightly lit as well as enjoying the wonderful views towards the centre of Paris and the Centre Pompidou, or else towards the chimneys of the incineration plant in Ivry to the east.

The major feature of the flats, however, are their balconies with perforated aluminium shutters that can be opened and folded back according to the time of day or the level of sunlight, allowing residents to choose between privacy and exposure to the sounds and sights of the city. The balconies offer residents an outdoor extension of their flat.

Theatre
The theatre is on the ground floor and completely different in design, with a black 224-seater auditorium, a raw concrete entrance and a brown, black and gold striped foyer. Elegant, chic, plain evening dress for the nearby Théâtre 13, which now has a second auditorium. 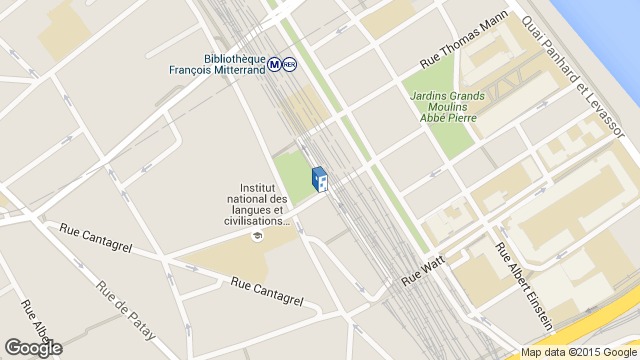 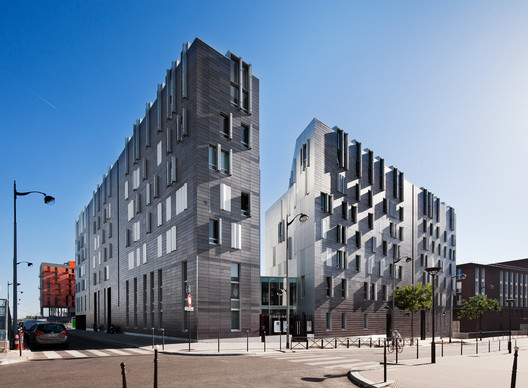