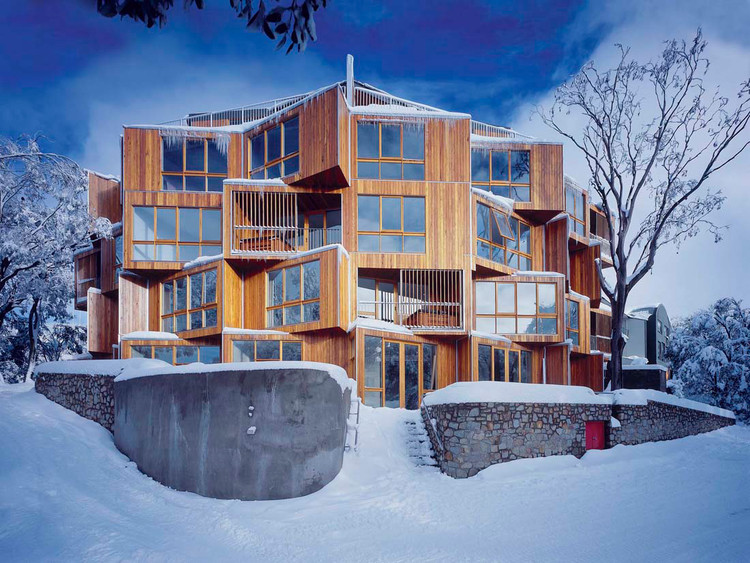 Text description provided by the architects. Built on a corner site, Huski is a five level apartment hotel, open for both the winter and summer seasons at Falls Creek, in the Victorian high lands.

All apartments are self-cater, with full kitchens and laundry facilities. With the exception of the studios, each apartment has a terrace and balcony hot tub.

The design for Huski originated from the study of snowflake geometry. The pure yet complex patterns combined with the influence of Australian timber alpine huts and international alpine resorts provided the basis for the resulting architectural form.

Radial in nature, the building responds to the delicate surrounding environment while utilising the steep site to maximise views of the Kiewa valley and Mt Spion Kopje, and allowing the scenery to penetrate every apartment. The modulated planes of the north façade emphasise the dynamic quality of the building both in plan and elevation. In contrast the subtlety of the worn timber materials is calming and suggests an affinity with local building typologies.

The problem of alpine architecture is the big roof - the crushing reality of snow load. Huski deals with this in a prosaic way and then presents an alternative phenomenon: one that holds the snow in (and seemingly off) the façade and not the roof - a snow building without eaves, the impossible: a snowman. It emphasises the building form as an outcrop: out of and from the landscape, not a canopy placed over it.

Like its neo-Tyrolean neighbours, Huski is a study in miniaturisation, but of a different kind. Huski is the compression of apartment building and hotel into a new typology. The plans consider the fundamental dimensions of sociability and pleasure, the exacting spatial detail of liveability and privacy: the extraction of superfluous space.

Up close, the building is an organic array of eucalyptus boxes. These private enclosures of hot tub and bedroom project idiosyncratic views through the trees and to the valley beyond. Each room draws its own horizon, setting and disturbing the rhythm of the façade: a collective identity made from individual expression. From afar, Huski addresses the scale of the mountain itself, not the module of the apartment, causing a shift in apprehension and scale as you approach.

This occupied eucalyptus wall follows the eye as it traverses the building's surface. Framed boxes tilt this way and that, alternating from room to terrace. Huski inhabitants are like the eyes of statuettes in a baroque façade - this is not a mask, but a reverberating surface both revealing and concealing the activity within: under scrutiny the surface breaks down.

All habitable rooms have fully operable windows or doors and indoor/outdoor spaces that encourage the use of the external environment during temperate periods.

The faceting and thickness of the northern façade provides shading to glazing during the summer months. During winter the lower sun is able to penetrate the façade providing higher solar penetration.

The Huski roof is designed to retain snow during the winter months. This layer of snow provides a thermal blanket dramatically reducing thermal loss.

Organisation of spaces inside and out

The client wanted to create a new type of boutique hotel that not only provided luxury accommodation for its guests but amenity for the general public.

The project is a consolidation of the precinct of neighbouring 5 star accommodation and the relationship of the building to the street was an important consideration. The terrace area at the front of the building moderates the steep level change between the street and Huski's ground floor commercial facilities.

Skier access is another important consideration as Falls Creek is a ski in/ski out village. We have provided a ramped landscape element to the east of the building to provide access for Huski patrons as well as the lodges up hill from our site. 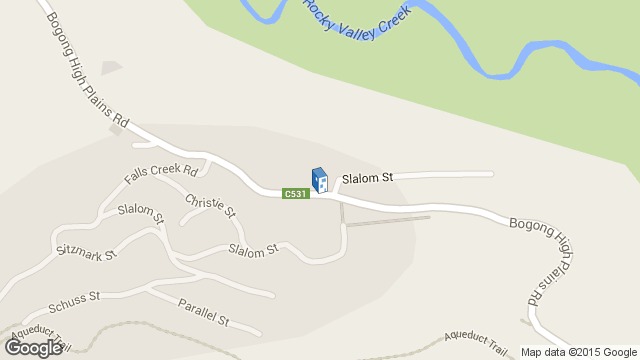