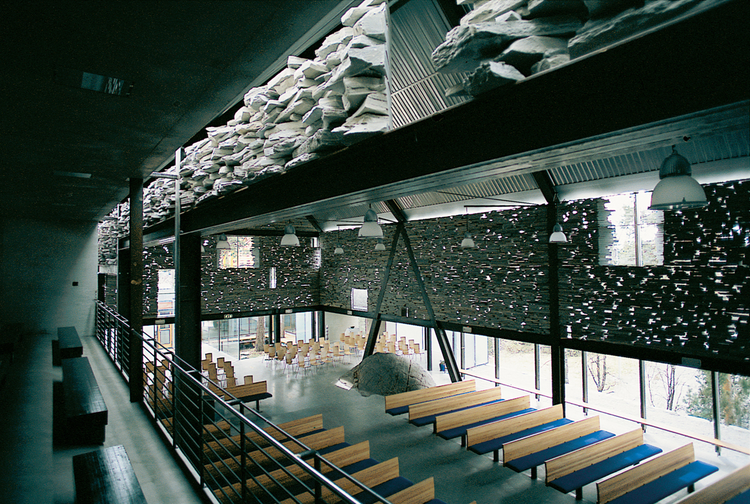 Text description provided by the architects. The church is situated on the top of a small crest with large pine trees and some exposed rock.
Geometrically speaking the church is an addition to the existing ground, no blasting and excavation was necessary except carefully removing the thin layer of soil. This technique, among other things, makes it easier to preserve the existing vegetation and topography, thereby adding a dimension to the experience of the building.

A number of trees are preserved in atriums within the enclosure. Some of the rock formations emerge like islands in the concrete floor of the church, between the congregation and choir. Thus the church takes its major divisions from elements already on the site. This is possible because there are relatively large tolerances in dimensioning the rooms. No module has been used to determine the exact positions of the gardens. Rather the materials and structures are chosen so that a gradual non incremental adjustment of dimensions, without steps or modules, is possible.

The tension between the wish to create a "silent" self-referring room, and a variety of obstacles limiting this possibility, has been deliberately chosen as a strategy to architecturally "disturb" a process in which a wide range of people and interests are involved, and which otherwise would be heavily loaded with conventional and other historical references.

The main structure is a steel framework with a stone wall carrying the roof. A glass facade 90 - 160 cm off the stone wall defines a narrow gallery around the church room. The stone in this wall is built without mortar, thus letting light through, and has one even side, and one uneven as standard. The uneven outside of the internal stone wall is exposed to the outside through the glass facade on three sides of the church. The stonewall is stiffened horizontally by steel plates, 4mm x 250mm, that spans between the columns, inserted into the wall every meter. These plates can stiffen this wall only when the weight of the wall itself is added to this structure. The glass facades are stiffened with "propels" made from steel plates that are inserted into the vertical joints between the glass panes, and to the horizontal steel plates in the stonewall.

The budget was very tight, and the price per square meter equals that of social housing in Oslo. To get this building realized we had to use every possibility we could think of to get more out of less, economically speaking. This was achieved mainly by avoiding conventional "proprietary" systems for facades, structures, walls, floors etc. Rather we used very basic methods and techniques and surprisingly found out, again and again, that not only was it cheaper, it also gave us a far greater architectural freedom.
The fragmented and complex character that emerged and concluded the process of searching for the possible configurations - that is the layout that eventually could be realized given the limitations we had - turned out to be so complex that it is virtually impossible to photograph the whole building, or interior in one shot. 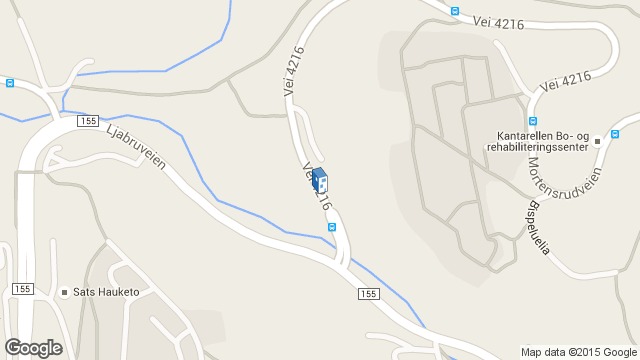 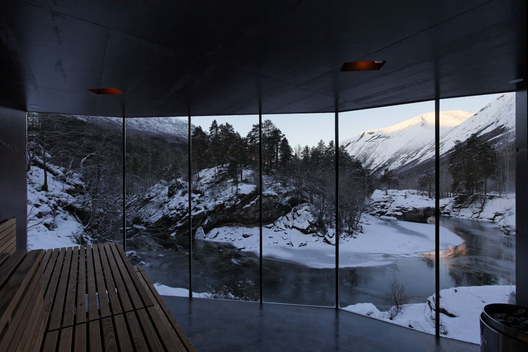