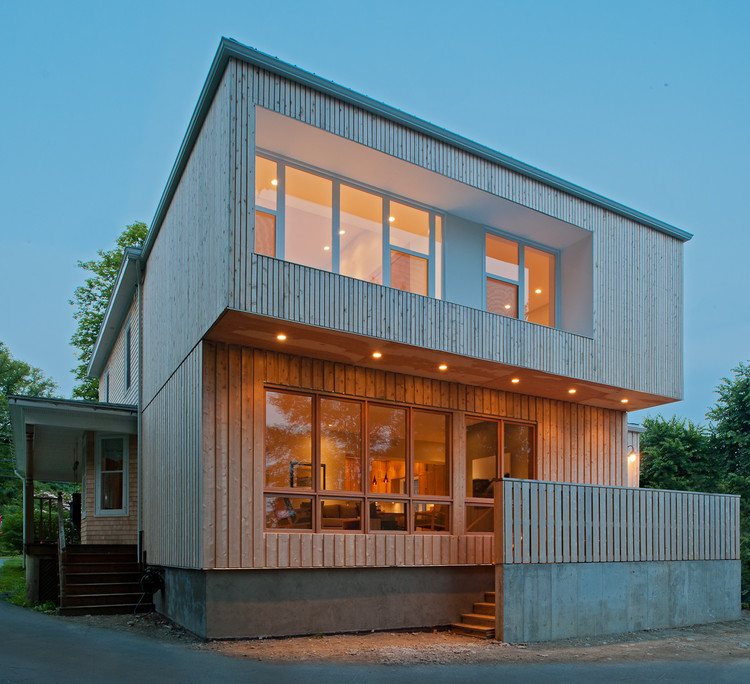 Text description provided by the architects. Dr. Lynda Earle and her husband Dr. Andy Blackadar both grew up in small towns in Nova Scotia (though Lynda was born in Winnipeg). Both went to study medicine at Halifax’ Dalhousie University. They met during their time in school and eventually got married. After leaving to Ontario to complete their residencies in Family Medicine, they wanted to eventually go back to the place that they came from, start their own practices and have a family together.

The time came to consider either moving or expanding their home. For many reasons they decided to stay where they were and expand the existing house. The addition and renovation project was designed in one sitting. The parti was simple: open the house on the “private” side towards the south. This orientation brought views of the Mersey River into frame allowing as much sunlight in as possible during the winter months and shade in the summer months. Above all else, the project aspired to maintain a modest street presence (preserving the original house), while in the addition they would use local materials and traditional building technologies.

The Earle Blackadar family home sits in the middle of a dense main urban street on a deep narrow lot and backs onto the Mersey River. Previously the home lacked engagement with the river. The rear of the home has southern exposure, an attribute which had hardly been tapped. Primarily, the massing of the proposed addition responds to both a requirement for privacy and a character of modesty.

Secondly, the massing responds to a desire to both draw in and shade natural sunlight depending on the time of year. The second story cantilevers over past the ground floor and subsequently shades the living room. The second story windows are deep set into bedrooms to provide necessary shading. From street/sidewalk view none of the proposed windows are visible. All that is visible are both east and west building elevations of meticulously placed cedar, in 3 forms. The existing century old house remains as it has always been, with a new jacket of 4″ exposure cedar shingles.

We proposed strategies for sustainable design on this project that were simple and effective. First and foremost, the clients decided to alter their existing house. There was no desire to build new. The plan to make the existing house more efficient and to apply efficient strategies to the new portion of the house is as follows: Change the heating system to a heat pump from tradition oil. Add an air exchanger. All new walls will be built to Nova Scotia Building Code requirements R24 and the roof to R40. The new foundation walls will be built using ICF. The roof and cantilever cavities will be filled with closed-cell spray insulation. Several of the older windows in the house will be replaced and all of the new windows (large openings) will be highly efficient vinyl windows on the second story and wood windows on the ground floor.

The layout of built-in cabinetry provides view corridors. All of the cabinetry, on both floors run in the direction of the building and the view toward the river. Visually, the addition presents itself as subservient to the existing house. The new portion would be shorter, lower, and less textured. Both the west and east elevations are extremely minimal – just the texture of the cedar. The fully glazed south elevation is within the private realm.

We designed for metal roofing on the addition in order to have a low sloped roof to decrease the overall engagement with the existing roof framing. There was a rigor about material integrity from the outset. Cedar is left unfinished. Interior millwork is left natural. Concrete is left natural. The roofing will be left natural, just galvanized. It was important that one recognized that the materials used were ordinary, though the sum of the materials and ideas attempt to achieve much more. 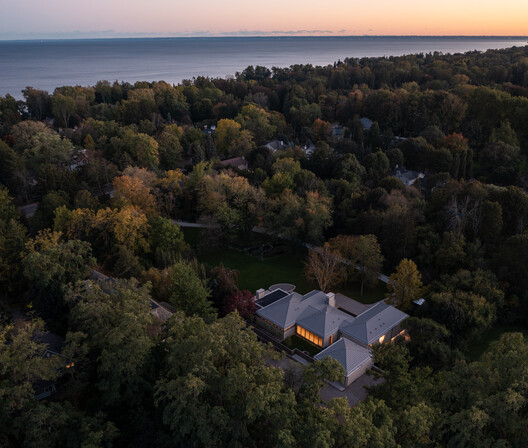