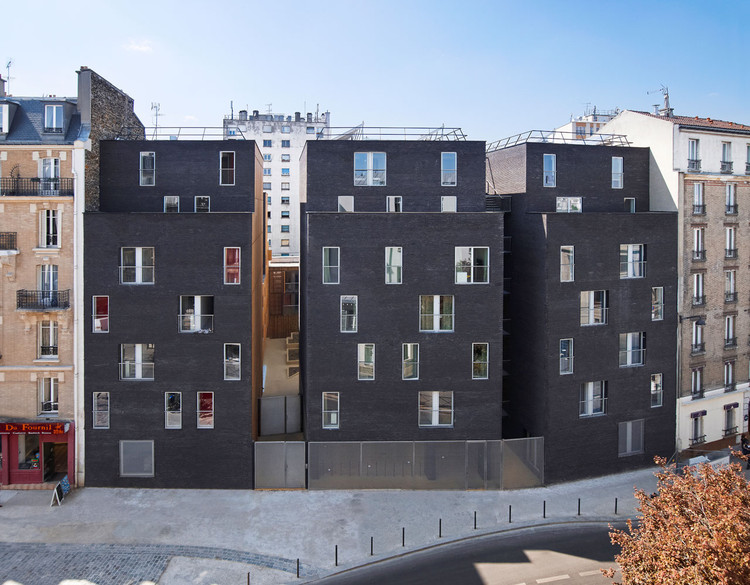 The project for a student residence was considered in the context of the urban fabric of the La Chapelle district in Paris and its role in its evolution. The plot is on the corner of rue Philippe de Girard and rue Pajol in the 18th arrondissement, close to the ZAC Pajol, an ambitious redevelopment of former railway yards, on which social, cultural and sports amenities are currently being created. The district is a very heterogeneous mixture of Haussmannian residential buildings, factories and workshops, and therefore has a richness and wide diversity of situations unusual within Paris itself.

The street and the courtyard

The project is composed of several buildings, whose volumes and voids depend on the context. On the street, three six-storey volumes are separated by two rifts providing access to the residence and vertical circulation. The heights of the buildings at the back of the plot vary according to neighbouring buildings. In the middle, a spacious courtyard is lit by a rift in the south building, an extension of an existing void. The courtyard, the heart of the project, provides access to the various buildings and defines their interrelationship. A 15 x15 metre square, it ensures sunlight for all the rooms and acts as a kind of green lung.

The strategy of creating a duality between street and courtyard was pursued in the choice of materials. The facades, instead of imposing a single image on the project, participate in creating the varying atmospheres of the spaces they envelop and delimit. The buildings on the street are clad in dark, slate-coloured brick, while the buildings around the courtyard are clad with larch planking with folding louvered shutters in front of the windows and balconies. The facade along the entry passage is also cladwith larch and announces the feeling of the space within. All the ground and wall surfaces in the courtyard are clad with the same light-coloured, flexible material, normally used for sports areas and playgrounds. The choice of materials was dictated by technical and architectural concerns. Our research was guided by a desire for durability and the sober, refined and classical nature of our project.

Generally speaking, the empty spaces in the courtyard and circulations could be said to be ‘junk space’ in that they are by-products of the design of the buildings. The project’s ambition was to give these spaces so much quality that they create a genuine ‘plus’ for residents. The exterior spaces, interacting with the communal spaces and acting as a buffer between private spaces, are not merely for circulation but provide the conviviality our project seeks to create. As these spaces were not part of the project specifications, their uses can be defined and developed by residents.

The brief specified the construction of a student residence of around 150 rooms, communal spaces, administrative premises and a caretaker’s apartment, with RIVP acting as project manager for the CROUS, which will run the residence. As one enters the residence via the rift on the left, one successively discovers the reception spaces, the administrative premises (on the corner of the street and the passageway), the communal facilities and the study and leisure areas around the courtyard. The 143 rooms have three different typologies. Students have furnished rooms with an average surface area of 18m2, with a bathroom and a kitchen area. The view of the courtyard creates a calm atmosphere conducive to concentration and study. The desks are always located near an outside view in order to benefit from natural lighting. Ten rooms were specially designed for people with reduced mobility.

The project complies with the “Habitat and Environment” label’s VHEP specifications. A combination of compactness, treatment of the envelope, and solar heat coupled with high-performance ventilation and heating (urban heating and solar panels) creates pleasant and comfortable accommodation. The concrete structure, insulated on the outside with 12 cm of mineral wool, brick or wood cladding and high- performance double-glazed fittings, provides efficient thermal insulation. In winter the buildings retain their interior heat, and in summer their exterior insulation reduces solar and internal overheating, while inertia enables the capture of daytime heat and its retention during the night. 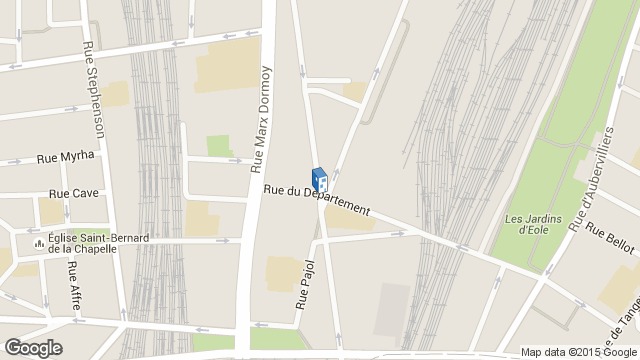