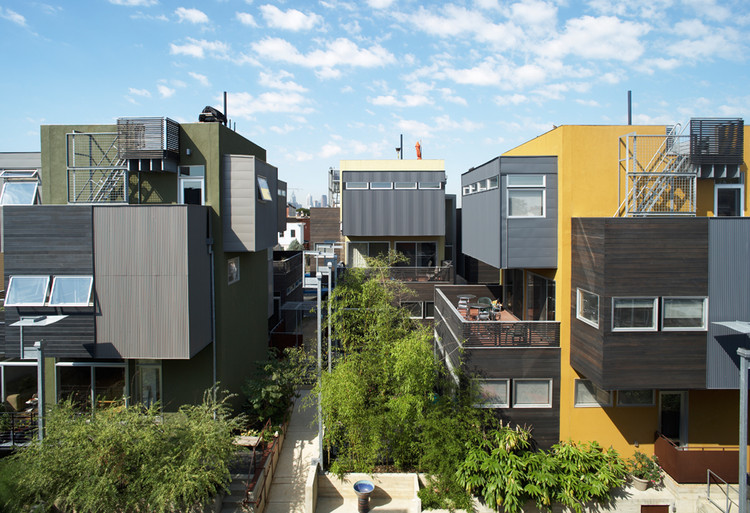 Text description provided by the architects. We were first introduced to Onion Flats by you, our readers. After posting our Architecture City Guide to Philadelphia we received numerous comments suggesting that Onion Flats’s work should be among the cannot miss list if you visit Philadelphia. We certainly agree. We chose to showcase their project Rag Flats first, but we will bring you more of their work in the coming days. Rag Flats is an experiment in and a critique of sustainable forms of urban dwelling. The former industrial rag factory has been re-conceptualized as a residential garden community created by prototypical forms of dwellings commonly found in Philadelphia: the row house, the trinity, the loft, and the pavilion. Rag Flats intentionally explores the necessary relationships between density, intimacy, and privacy in any urban community. Rag Flats was a collaborative design/build project.

More on this project after the break!

Onion Flats asked Minus Studios (John Gwin and Jeremy Avellino) and Cover (Dan Magno and Ken Roscioli) to join them in what was understandably a risky endeavor. They gave them little direction and enormous responsibility. Minus took on the “row” experiments, and Cover took on the custom steel experiments. While all had their collective responsibilities, cross-fertilization was commonplace. In the process an inspiring team of architect/builder/craftsmen was forged among these three companies as the project was being built. This is a significant dimension to the critique and experiment of Rag Flats because it proposes a mode of thinking and building which is collective, creative, and cohesive rather than specialized, limited, and fragmented. It suggests that the core of any successful project does not rest merely on the architectural gesture/concept but rather on a structure in which all involved “own” the project. This team approach confirmed that, whether at the scale of a building or a city, no real transformation is possible without altering the framework for imagining and actualizing which opens questions, instigates a dialogue, and provokes controversy rather than merely solves problems.

- Emphasis on physically working with materials rather than relying on computers

- Orientation of buildings on site to north, south, east, and west, with no emphasis on any one direction

- Indoor/outdoor rooms on all levels

Inspired by one of the most fundamental urban building blocks of Philadelphia, the “trinities” occupy and redefine the central courtyard of the community. Freestanding yet perceptually interwoven, each dwelling is a 2140-sqf, three bedroom, three bath, three story, 20’x20’ trinity tower with “extensions” at each level. Outdoor garden spaces at the ground level for each dwelling are intimate and private yet interdependent. Each trinity is oriented to the courtyard and path of the sun uniquely, such that the light and air inside and outside each unit are ever changing and particular to its specific setting. Fundamental to these trinities is the desire to occupy fully all roofs as “living” rooms, private garden platforms, extensions of the interior, and connections to the immediate and surrounding community.

“Trinity communities” made up a significant portion of Philadelphia’s residential neighborhoods 100 years ago and still do. Such communities get little press when issues of urban form and density are discussed in regards to Philadelphia’s past and future, probably because they were virtually invisible and still are. One finds these communities tucked into the “interiors” of many neighborhood blocks. They are like Russian dolls, communities within communities, blocks within blocks. To enter a trinity community one generally passes through a small, narrow alley, carved out between two, street-facing row homes. Such alleys appear to be private and strictly for access to the back yards of the adjacent row houses. Often, however, these alleys are actually miniature streets, which lead into the depth of the block behind the row houses “proper” and are lined with trinities on either side. Named for the Christian Trinity of “Father, Son, and Holy Ghost,” these trinities also have three parts or stories. They often occupy a mere 12x12 footprint and are stacked like soldier courses of brick. Some might view these micro-blocks with disdain – unlivable throwbacks and references to Philadelphia as an overpopulated and industrial giant and irrelevant to our present urban condition. We are, however, utterly fascinated by them as metaphors, artifacts, and prototypes.

Minus Studios was commissioned to design and build the two row homes at Rag Flats. These structures, unlike the trinities, were street facing and party wall sharing buildings, sandwiched between the existing factory and the humble, wonderfully dissonant neighboring row homes. Because of their visibility, actions spurred much dialogue in the community, both positive and negative, but always direct. Neighbors watched over the work, gave their critiques, and filled water bottles. The network of interactions between such people as Ruthie, Helen, Mike, Gene, Butch, Mike and Joan, was vital to the actions taken and the work created. Minus Studios had very little experience when they were presented with this commission. Most days were a mix of fear, ignorance, ingenuity, pressure, despair, joy, pain and rigor. Working with a simple palette of common and inexpensive building materials, they focused on flooding the open plan with natural light, and blurring the reading of two buildings into one coherent composition. They maximized space in an inherently efficient archetype by “pushing” the plan out into public space wherever possible. Front facing bedrooms gained a reading nook with a cantilevered box; balconies protruded off of each rear-facing bedroom; a switchback staircase floated over the courtyard to allow a sensible plan; roof surfaces became decks to supplement shallow backyards

The Pavilion is a glass and steel structure perched atop a masonry plinth remaining from the defunct rag factory. We approached this unique corner of the site with the desire to experiment with a fundamentally different type of construction, a particular mind-set for detailing, and a new set of tools and challenges. 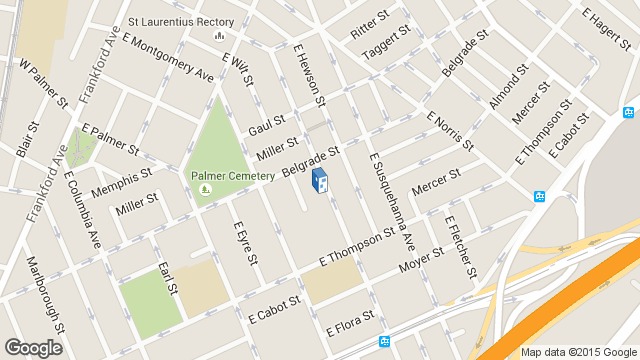 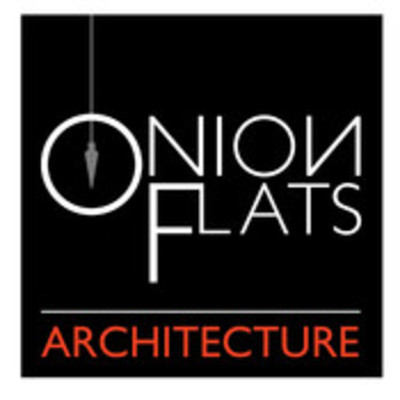 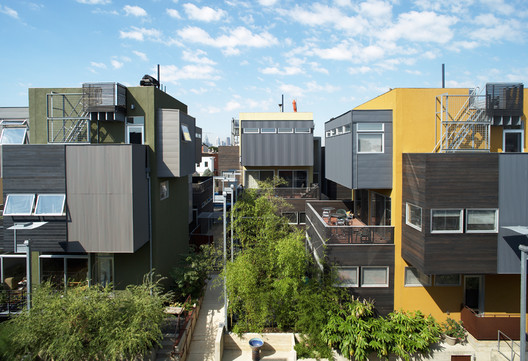