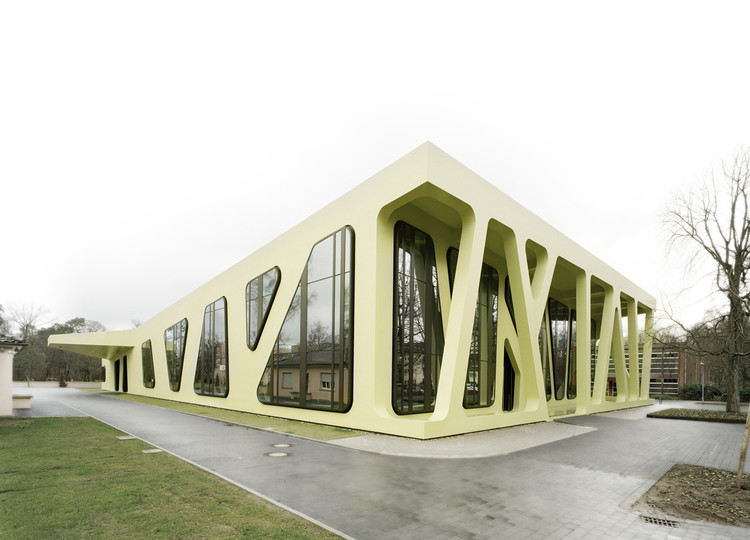 Text description provided by the architects. A new canteen for the Technical College, Teacher Training College and the State Academy for Fine Art has been completed north of the Moltkestrasse. This new address will form an attractive new centre for the campus where the disciplines can meet, eat and exchange ideas.

The canteen's location in the Moltkestrasse in the transitional zone between the built up campus to the south and the natural open space of the Hartwald Forest to the north. This is a spot where the character of the campus area is particularly clear. The orientation of the building, with its generously glazed facades, is toward the urban life of the campus, from where the diners arrive.

The dissolution of the structure into stem-like posts shows an associative relationship to the wooded areas nearby and creates an atmospheric transition between the buildings to the south and the shady forest to the north.

The conceptual approach to the project started from the sculptural idea of taking the largest buildable plot of land, cleaving it from the ground and organizing the functions of the canteen inside the rift created. From this came the mass of stringy stem-like supports that form between the two plates as they are pulled apart, as a logical conclusion of the idea of the separation of the two horizontal planes. In this way, the roof of the building is also covered with grass, to follow the concept of a cleft plot of land lifted into the air, as well as to help create a sustainable building.

The canteen itself is composed of a generous, high and bright dining hall to the south and a compact functional area to the north, containing kitchens, storage and services.

The dining hall is augmented by a shaded veranda to the south and a wind shielded terrace overlooking the Englaenderplatz, creating a flexible combination of interior and exterior dining space to suit all weather conditions. A cafeteria in the south west of the dining area can be run independently of the main canteen functions and, with its longer opening hours, offers considerable amenity to this focal point within the campus.

The layered openings of the façade are carried through to the interior of the canteen building. The colonnaded structural parallels create a depth of shifting layered perforations, where one can look through or be sheltered, referring again to the nearby forest. A spatial quality is created that plays on the themes of large scale transition from culture to nature, echoed in smaller of scale in the preparation and consumption of food.

Stagecraft can exist only in the presence of an audience; current sociology blurs the distinction between performer and observer- similarly the diners at the large, campus oriented canteen form a part of their college lives at once as actors and audience in one space, a place that embodies the public nature of communal eating as well as that most intimate, primitive act of eating, common to and yet different for everybody.

In this respect the canteen is a processional, transformational space.

The cost effective and sustainable construction of the building consists of a solid internal concrete core surrounded by a structural polyurethane coated wooden network of columns carrying the roof and façade. This technology has until now been used almost exclusively in the restoration of flat roofing systems as well as multi storey car parks and bridges. Being both waterproof and breathable, the polyurethane allows the laminated wooden construction underneath to breathe. The tough elastic coating will also tolerate expansion of the wood. The polyurethane bonds with the structure to form a surface which resists mechanical pressure and, unlike varnished and lacquered surfaces, resists the infiltration of moisture.

The vertical glazing of the façade openings is held vertically on both sides and contains permanent elastic horizontal expansion joints. The edges of the glazed areas are framed in profiles which protrude slightly from the surface of the façade. The load bearing verticals are internally anchored into the wooden structure.

This innovative approach to proven materials and construction make the canteen a prototype for the possibilities of today's technologies in times of shrinking public building budgets, demanding criteria and restrictive technical requirements. The high standard of design and function remain uncompromised by the sparing use of resources and materials.

This process has resulted in the unconventional plastic appearance of the building, challenging expectations of stucco, masonry or glass and steel facades, creating an unexpected new face for a public building.

The Moltke Canteen is an essential new cornerstone in the identity of the college campus, the city of Karlsruhe and the state of Baden-Württemburg, which from its inception has attracted local and international attention. 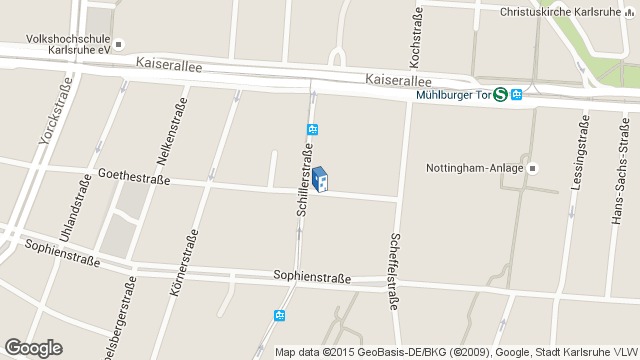