Text description provided by the architects. Located on the east bank of the Seine sits one of Paris’ largest urban renewal projects, Parc Andre Citroen. As part of a competition in 1985, the former site of the Citroen automobile manufacturing plant would become a new public park that would bridge the urban and rural areas of Paris. The Citroen plant dates back to 1915; however, it was abandoned in 1970s when the company moved further outside of Paris. As part of one of the largest urbanization reclamations in history, Paris began to buy back brownfield sites, in addition renovating others, as part of a city re-beautification process.

Completed in 1992, Parc Andre Citroen was not a singular design, but rather a collective of separate initiatives that converged together. During the competition, the jury was unable to decide on a clear winner, rather suggesting a collaboration of the submissions headed by Alain Provost, landscape architect.  The remaining members of the team included: Gilles Clément, Patrick Berger, Jean-François Jodry, and Jean-Paul Viguier.

The main objective of the parks design was to serve as a transitional mediator between the urban and rural regions of Paris. With most of Paris being part of the urbanized central region, Parc Andre Citroen is more of transition between Paris’ epicenter and more residentially populated areas than it is between the urban and the rural. Considering that the park is trying to become that interstitial space where both the urban and rural meet, there were four themes or design strategies that Provost and his team focused on: artifice, architecture, movement, and nature.

In regards to the conceptual framework, the 14 hectare site was design with both urban and rural typologies in mind by the juxtaposition of open and intimate spaces that coexist into an overall larger system. At the heart of the park is a large lawn that stretches through the center of the site from a plaza in front of two 15 meter tall green houses to the Seine.  The large lawn is intended to attract people from across the city to play, relax, and most of all enjoy the open space.

To the southwest of the lawn, there is an elevated canal that has an elevated reflecting pool that is lined with granite guard stations; each a different study in solid and void that either minimizes or maximizes the enclosure as a way in which to frame specific views across the park. To the northwest, there are a series of themed gardens that take on different atmospheric qualities.  Each garden experiments with different metals, plants, states of water, sense, and even days of the week.  The gardens line the main lawn, yet are separated by a wall of shrubbery, isolating them as more intimate spaces transplanting the visitors into a specific conditional state disembodied from the urban context.

All of the gardens are linked through an above ground walkway that allows one to experience the garden from a distance, and even though they are situated along a linear sequence , each can be individually experience.

Aside from the smaller intimately scaled spaces that line the main lawn, the rest if the park is out of touch with the human being, in regards to scale.  The 273 meter by 85 meter lawn is adjacent to two over embellished green houses that contain exotic and Mediterranean plants. In a compositional sense, the greenhouses provide balance to the overall site plan; however, as individual entities they embody a scale of a more urban building type.

Parc Andre Citroen is an agglomeration of strong geometric forms juxtaposed to more organic, natural elements.  The hard edges are complimented by the soft characteristics of the individual gardens.  It can be said that Parc Andre Citroen is a convergence of several scales and types that alone cannot exist compatibly within the city; however, in conjunction with one another they create a natural balance of open and intimate spaces, hard and soft, and urban and rural. 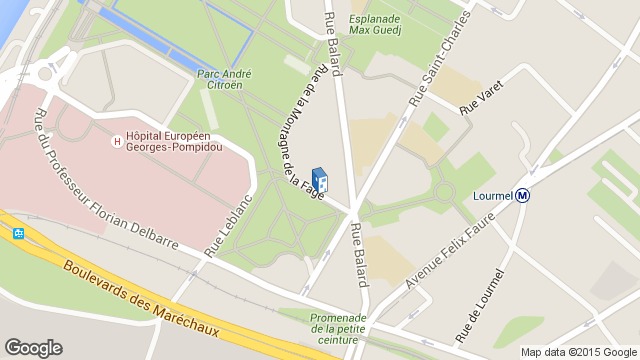 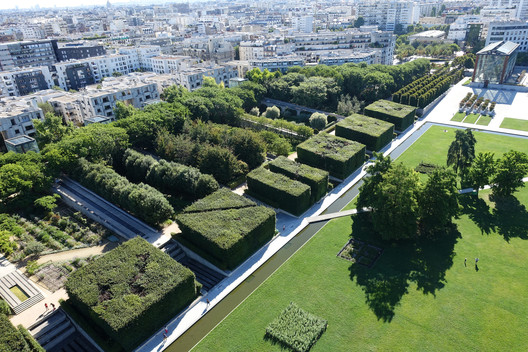