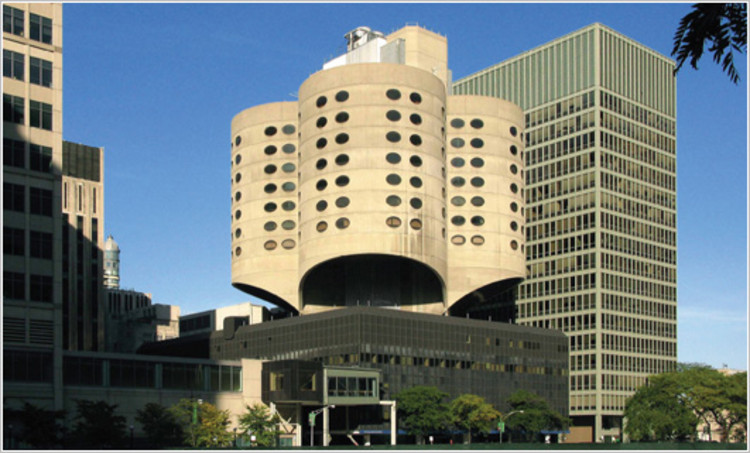 Northwestern University has selected Perkins+Will to design the new 600,000 square foot Biomedical Research Building for the Feinberg School of Medicine in Chicago. Planned for the site of Bertrand Goldberg’s recently demolished Prentice Woman’s Hospital, the new building will “anchor the University’s research facilities and be the hub of a world-class research and development enterprise that attracts innovation and entrepreneurship.”

How to Get a Building Through its Mid-Life Crisis

According to LA Times architecture critic Christopher Hawthorne, buildings experience a pretty distinct mid-life crisis. After seeing the demise of mid-century gems such as the Houston AstroDome and the Prentice Women's Hospital in Chicago, it's difficult to disagree. But unfortunately architectural value isn't convincing enough an argument - if preservationists want to get serious about their cause, he suggests, they will have to pick their battles far more strategically.

Northwestern University has unveiled three final proposals that are in the running to replace Bertrand Goldberg’s Prentice Woman’s Hospital, which is currently being demolished in Chicago after a long, high-profile preservation battle. The shortlisted architects - Goettsch Partners and Ballinger, Perkins + Will, and Adrian Smith + Gordon Gill Architecture and Payette - have each proposed a two-phased plan for the 600,000 square-foot Biomedical Research Building, which is intended to become a “world-class research and development enterprise” that serves as an “anchor” for the Feinberg School of Medicine’s research facilities.

View the shortlisted proposals after the break...

In light of the extensive demolition that has already taken place at Bertrand Goldberg’s Prentice Women’s Hospital in downtown Chicago, we present to you this short film that examines the hospital’s preservation battle and poses the question, “Who determines the future of the past?”

Is The Demolition of Prentice Hospital Another "Penn Station Moment"?

This article, by Michael R. Allen, was originally published on Next City as "Prentice Hospital Could Become Modernism's 'Penn Station Moment'"

When the concrete cloverleaf of Prentice Hospital sprouted from the Chicago ground in 1975, its award-winning design met the praise of critics and the admiration of many Chicagoans. Architect Bertrand Goldberg drew from Brutalism, but with a symmetry and grace that distinguished Prentice from more angular works in that style.

This week, as Goldberg’s famous work is pulled apart by wreckers, nothing about its loss seems symmetrical or graceful. Within 40 years, the building transitioned from a proud symbol of civic renewal and design innovation to the victim of old-fashioned Chicago politics. The controversy surrounding the demolition of Prentice, however, injected the preservation movement into an urban design discussion with a presence not seen in a long time.

Shortly after confirming the demise of Bertrand Goldberg’s beloved Prentice Women’s Hospital in Chicago, Northwestern has released a shortlist of three firms competing to design the school’s new biomedical research facility. This comes with the support of Chicago Mayor Rahm Emanuel and despite strong backlash from architects and preservationists worldwide.

In response to the Commission on Chicago Landmarks’ decision to reject landmark status to Prentice Woman’s Hospital for the second time in three months, the two preservationist groups challenging the City of Chicago have withdrawn their lawsuits. This eliminates the last barrier standing in Northwestern University’s way to demolish the historic, Bertrand Goldberg structure for a new biomedical research facility.

“We felt that we had done as much as we possibly could to demonstrate the significance of the building and ways to reuse,” stated Christina Morris, a senior field officer for the National Trust for Historic Preservation. “We just couldn’t see that we’d have any other outcome.”

For many, this news is disheartening as architects and preservationists from around the globe have fought in solidarity for much of the past year in an attempt to illustrate the importance of this one-of-a-kind structure.

The new year is off to a rough start for the preservation of modern architecture, as Bertrand Goldberg’s Prentice Woman’s Hospital appears to be joining Richard Neutra’s Cyclorama Center on the demolition list for 2013. Northwestern University senior vice president for business and finance, Eugene S. Sunshine has confirmed that, despite strong opposition from architects and preservationist worldwide, the university will be replacing the historic, Chicago icon with a new biomedical research facility.

Amidst the longstanding, heated battled to save Bertrand Goldberg’s iconic Prentice Woman’s Hospital, the results of the 2012 Chicago Prize Competition: Future Prentice have been announced! Presented by the Chicago Architecture Foundation, in collaboration with Chicago Architectural Club and the Chicago Chapter of the American Institute of Architects, the international competition intended to act as a platform for public debate about the future of the controversial Chicago landmark.

More information and the winning proposals after the break…

Despite strong opposition from preservationists and architects world-wide, Chicago Mayor Rahm Emanuel has announced his decision to support the demolition of Bertrand Goldberg’s Prentice Women’s Hospital. In a op-ed piece released by the Chicago Tribune, Emanuel supported his stance by arguing that Northwestern’s new biomedical research facility would “bring 2,000 jobs and hundreds of millions of dollars in investment” to Chicago. Emanuel believes Goldberg’s “vision is alive in Chicago beyond one building” and allowing Northwestern to build the new medical center is crucial in keeping Chicago at the forefront of scientific innovation.

The preservation battle continues over the fate of Bertrand Goldberg’s 1970’s Prentice Woman’s Hospital. As we reported in July, an ever-growing community of prominent architects – such as Frank Gehry, Jeanne Gang, Tod Williams and Billie Tsien – have joined preservationists in the fight to save the late modernist structure that is at risk of being replaced by a new biomedical research facility for Northwestern University.

The seven-story concrete cloverleaf, cantilevered 45 feet from the supporting core and floating atop a glass and steel box, is an engineering feat ahead of it’s time as well as an important icon within the Chicago skyline. As architecture critic Michael Kimmelman argues, “Great late-Modernist buildings, innovative and ruggedly beautiful, deserve respect and, increasingly, careful custody. Prentice is a good example.” However, it is not suited for 21st-century research labs and many Chicagoans hate it. Currently, Northwestern University is leading the debate by arguing that a new building would “bring to the city millions of investment dollars, create jobs and save lives”.

Could there be a compromise? Solutions are rarely black-and-white. Kimmelman has consulted Chicago architect Jeanne Gang to envision a proposal that would satisfy both opposing sides. Continue reading to learn more.

This concrete, clover leaf-shaped structure, which was built in 1975, will likely suffer a fate common to many vacant and disused buildings. After approximately four years of vacancy, this Bertrand Goldberg-designed building will likely be demolished when ownership will revert to Northwestern University this year. Although Goldberg’s organic architectural designs – such as this one – were widely influential, none of his major Chicago works are protected by local landmark designation. Prentice Women’s Hospital was considered groundbreaking for its cutting-edge architecture, advanced engineering, and its progressive design approach to organizing medical departments and services. It received international press coverage and an award from Engineering News Record for its innovative tower and open floor-plate layout that eliminated the need for structural support columns. “You will not find the structural solution to Prentice, which is an exterior shell cantilevered off a core, anywhere else in the world” notes Geoffrey Goldberg, an architect and Bertrand Goldberg’s son. “Prentice was the only one in which this was achieved.”