Murals: The Latest Architecture and News

This article originally appeared in The Genetics of Design and was then republished by Common Edge.

Since 2015, Ragusa, Sicily has hosted FestiWall, an international art festival devoted to enhancing the public realm and improving citizen engagement with the modern section of an old city. The image above shows two views of a residential tower before and after FestiWall. Which one grabs your eye?

We’ll guess you’re drawn to the one with the art at right. Running the image through biometric software predicts you’ll immediately focus on the man in the mural.

A Pop of Color on Public Spaces 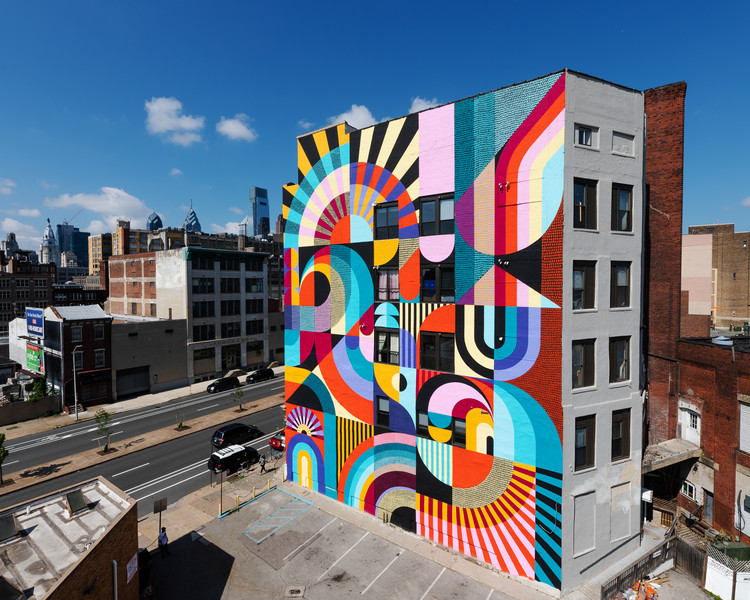 If a painting can trigger its viewers' emotions with just one observation, imagine the impact of a building-sized mural on an entire city.

Baltimore-based artists Jessie Unterhalter and Katey Truhn found a way to enhance people’s lives through art by adding visual playfulness to public spaces. Since 2012, they have been working on sculptures and large-scale murals, curving around building corners and spilling them onto the ground. The artistic duo explored themes of movement and symmetry by experimenting with bold color combinations, patterns in nature, and woven textiles.

Take a look at some of the lively murals created by Jessie and Katey that transform public spaces into colorful experiences.

Spanish designer and photographer A.L. Crego has brought street art to life in his latest project, adding movement to murals from the around the world. In order to maintain the original artwork, Crego first photographed the sites and then digitally intervened to convert them into animations.

All the murals selected by the designer convey messages about dependence on technology and its effects on personal interactions.

View his urban GIFs after the break.