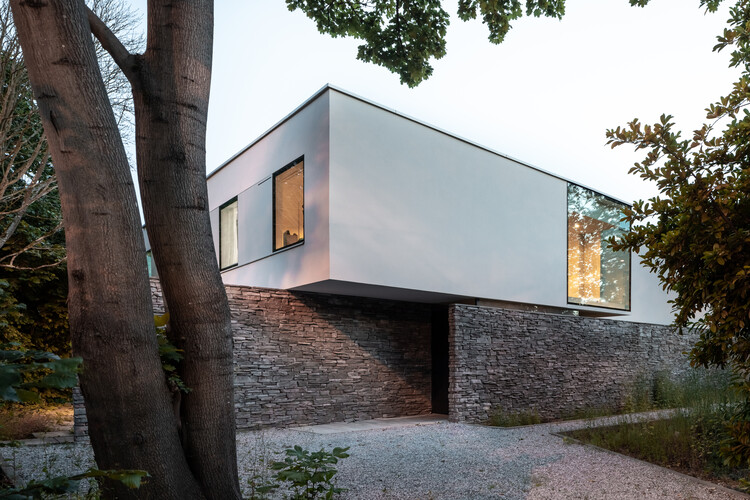 Text description provided by the architects. Located in a residential area on the outskirts of Brussels, this new house was designed to blend in discreetly while asserting its contemporary character. It is partially hidden behind the vegetation that has been preserved and is characterized by a very horizontal volumetry. A suspended volume ornates the front facade in which only a large bay window in the corner creates an interaction between the interior and the street. The large horizontal stone walls anchor the house to the land, ensure the privacy of the ground floor and allow to give a sequence to the entrance of the house. They also contrast with the more refined and white architecture of the rest of the house.

Several visual axes are gradually revealed. They stage the main architectural elements: the front patio visible from the entrance, the monumental staircase that is discovered later, and the interior bathed in light that fully opens to the garden. These visual axes extend outwards, especially the one on the first floor which opens up a beautiful perspective towards a street that faces it at the front.

These visual and circulation axes are present everywhere. They give a view of the house in all its length. They also accentuate the impression of space and reveal the great fluidity between the interior spaces. These open one into another and the double height connects the living rooms on the ground floor with the multipurpose spaces on the first floor. These spaces are bathed in sunlight because they benefit from a multitude of light sources, including a zenithal one above the staircase. The staircase is one of the masterpieces of this house. Its curved and supple forms dress and characterize the space.

Thanks to its L shape, the house benefits from the sun throughout the day and is very bright. In the afternoon, the sun begins to shine through the front façade. It is then through the patio that the sun comes to illuminate the interior while ensuring the intimacy of the inhabitants thanks to the large stone walls. This patio constitutes a sort of proximity garden in contrast with the large openings that make the wooded environment a background to daily life. This house is indeed characterized by very large floor-to-ceiling windows that occupy almost the entire rear facades on the ground floor. The largest window measures 535cm x 270cm. To prevent overheating, these windows are equipped with solar filters.

The details of the structural glazing, specifically developed by the architects for this project, make the frames disappear, offering a fully open and unobstructed view from the interior. These unique details are technically complex and give finesse and elegance to the facades. On the upper floor, views and light are dissociated from the ventilation. Thus the glazed parts are fixed and the opening frames are opaque. This allows to free the views on the outside from any technical contingency.

The load-bearing elements (walls and floors) were made of solid wood (CLT) and metal. This allowed to limit the weight of the construction and thus to reduce the foundations and the sections of the metal posts. The impression of lightness of the whole is thus reinforced. The solid wood walls are also structurally interesting to create the cantilever of the entrance and allow to restrict the carbon footprint of this new construction. 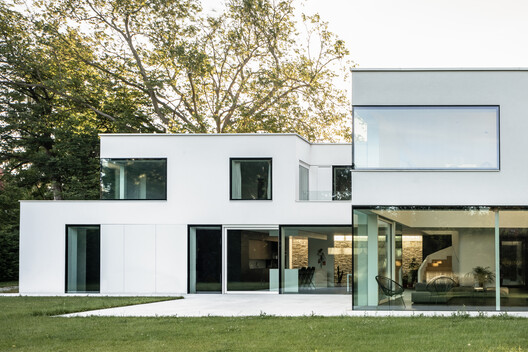