Save
In San Francisco, the 5M Development Envisions Public and Private Space for the Future
Share
Or
Copy

The chance to reimagine a four-and-a-half-acre site containing both historic buildings to be preserved and lots slated for development in a major American city is rare. For the team behind 5M, a project on a nodal site in downtown San Francisco, this prospect came with exciting potential to engage with all aspects of community building and place making. Completed by SITELAB, KPF, and a host of other firms, 5M reveals a transformed, multi-use downtown site following a decade-long process. 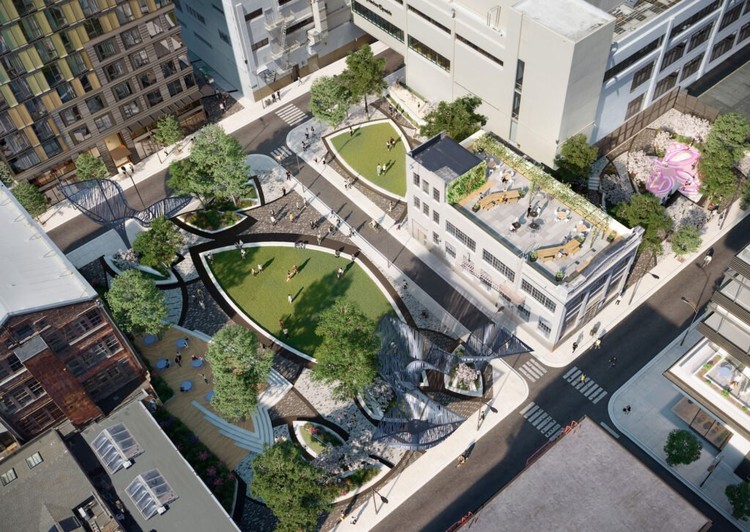 Significant urban design projects on the scale of 5M are “about how you string together the opportunities so that you gain momentum and gain more of the critical mass and power. It’s not about one thing acting by itself,” says Laura Crescimano, cofounder and principal of the San Francisco-based urban design firm SITELAB Urban Studio, which began work on the site a decade ago. “And that’s the same way we think about the design process.”

Developed and operated by Brookfield Properties, 5M is located at between 5th, Mission, and Howard streets in a public transit–rich area. It opened to the public with an ambitious agenda on multiple fronts. The phase of construction completed last month includes the 640,000-square-foot, 25-story 415 Natoma office building designed by Kohn Pedersen Fox, The George apartments by Ankrom Moisan, The Parks at 5M, the historic Dempster printing building, and the Camelline building. Cultural programming will activate the landscaped outdoor park that contains a dedicated performance area. The over 300 units completed thus far include both affordable and market rate housing, with more to come. 5M also factors in the over 200,000 square feet of existing office space contained within the historic San Francisco Chronicle and adjacent Examiner buildings owned by the Hearst Corporation, which partnered with Brookfield on the entitlement process.

Crescimano points to how “the idea of developing truly mixed use,” beyond simply placing retail on the ground floor with residences and/or offices above, was foundational. 5M would be a snapshot of a dynamic city and a nuanced particular place in west SoMa, where old and new are juxtaposed thanks to “that stitching together and honoring the history of place,” she says. The area is home to a longstanding Filipino community and has a connection to labor history, among other significant threads.

Designers, planners and community advocates set out “to create that density and mix of uses that draws from the character here, which is a little funkier, more playful and creative,” Crescimano notes. Prioritizing elements like pedestrian needs, inclusivity and scale for all users and neighbors meant trying to be “embedded and not about creating an island.” In that sense, 5M should meet the needs of its immediate residents and tenants and be a resource for neighbors and even casual passersby.

Extensive public outreach that included the newly formed 5M Community Advisory Committee shaped every physical and intangible aspect. “Even though it is not necessarily the fastest process, those voices make a project better,” Crescimano says of the charettes and forums organized by SITELAB Urban Studio and local partners. Changes to 5M included materials and colors, and types and diversity of seating. Public performances and programming overseen in part by CAST (Community Arts Stabilization Trust), which is located in donated space at the Dempster Building along with other non-profit cultural and arts organizations, is another community benefit. Instead of using public arts funding to commission “a sculpture and that’s the end of it,” these privately owned public parks can be “more dynamic.” (Firms !melk and Cliff Lowe Associates served as the project landscape architects.)

Trent Tesch, design principal at Kohn Pedersen Fox, echoes the value of public input, which in addition to other considerations, shifted the physical arrangement of 5M over the course of planning and entitlements. The 5M master plan contained guidelines helping regulate articulation, color and texture of new buildings. Wind testing also changed final decisions about where buildings would be sited, and with regard to determining setbacks, “this was fine tuning, and crafting a very bespoke building,” he says of 415 Natoma.

The narrative of the contemporary workplace is being rewritten in our current moment, but there were certain things that the design team was certain about. “There was a real desire not to do another building that’s just a glass box,” Tesch explains. (The team also included included House & Robertson Architects.) On this parcel between 5th, Howard, Natoma and Mary streets surrounded by notable eclecticism, “we really pushed hard to make sure we were doing a building that had a lot of character and fabric on the facade.” The result contains an intimate lobby and series of bays along Mary Street that make for a “more inclusive” building that invests “more on the alley structure of San Francisco as opposed to the major grid,” he adds.

The podium at the tenth floor of 415 Natoma contains two decks with contrasting, distinct views of the city and the San Francisco Bay. The tower then splits into two articulated volumes of different heights that nonetheless remain visually connected. “The idea is they hug each other,” Tesch says. KPF devised what Tesch describes as a “seven and three” system based on a 10-foot module that wraps the facade; seven of the 10 feet are glass and the others opaque, compared to a typical five-foot module on an office tower. The eliminated mullion means “you register the seven-foot window. To me, it’s a more elegant solution.”

As San Franciscans begin to visit, live in and experience the multiple features and spaces at 5M, the team’s early commitment will help spark conversations that address questions here and beyond. “What is our daily routine? What do we want out of our cities? Nobody wants a generic place. There’s a shared value in connecting to local culture and community,” SITELAB Urban Studio’s Crescimano says. “I think that puts this project in a position to fulfill the way the city can evolve.” 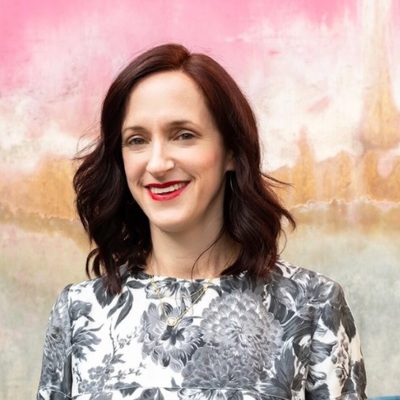 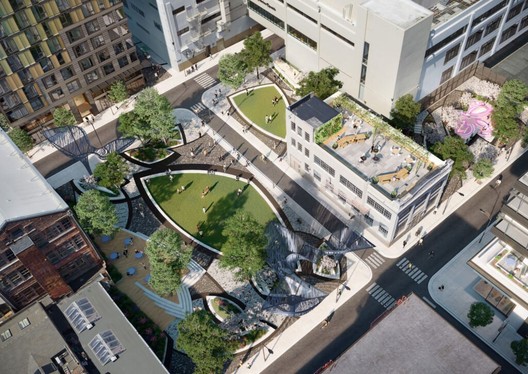