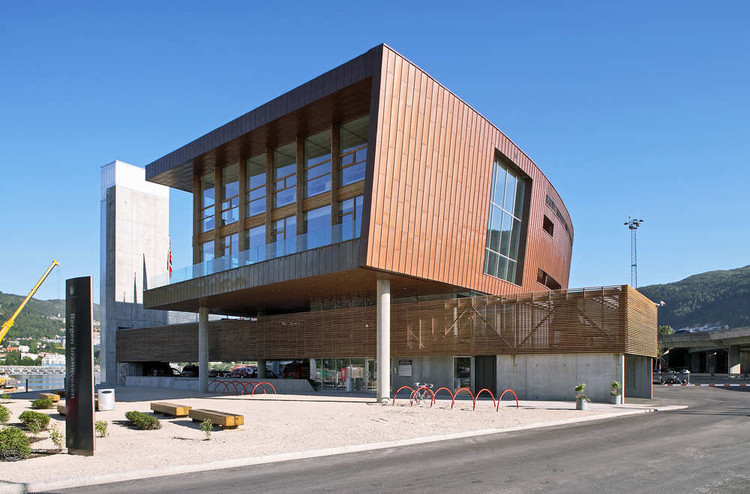 Text description provided by the architects. There are three important factors fundamental to the design of the firestation:

- site qualities- shoreline and magnificent views of the city's mountains, Ulriken and Fløyen

- dominant and negative appearance of the traffic

Curved shape of the building with the dense screen against the traffic creates a sheltered space in front. The curve follows the outer edge of the site in order to keep this space as wide as possible.

The base (1st and 2nd floor) includes the shoreline, the front yard and the solid south end which gradually dissolves into structural slabs and pillars. The increasing openness of the structure to the north is an invitation to future settlement and urban development in the area.

The entire base is made of concrete, casted on site. Secondary structural elements are steel and aluminum. Goal has been to promote a rough look. Garages, workshops, emergency dressing rooms, technical rooms and storage rooms are located in these two lower floors.

The screen (3rd and 4th floor) is the most prominent element of the facility. It rests on and cantilever over the base. The screen is designed so that the roof, the west facade and the floor plane between 2 and 3 floor stands out as one element. In order to emphasize the shape, natural copper plates is chosen for cladding. The roof is compact with cellular glass on steel plates. Copper cladding is attached to the metal brackets in the glass cells.

The screen contains bedrooms and living room for the contingency crew and administrative functions. The screen opens towards the front yard, the water and the mountains. The facade facing front yard is entirely made of untreated larch and glass. Slender vertical pillars clarify the rhythm and emphasize the curved shape. The pillars function as wind bracing for the facade and bearing for the large windows. The roof and the ceiling of 4th floor are tilted to open up towards the view of the mountains even more. On the 2nd floor there is direct access to balconies from all rooms. The balcony is lowered into the screen in the whole length of the building.

The structural elements of the screen are steel structure and hollow core slabs. The steel beams with corrugated sheeting supports the roof, while cladding in addition to glass is mainly wood. The goal has been to promote a refined, processed expression, characterized by wood, glass and bright surfaces.

The tower rises from the base. The asymmetric placement in relation to the front yard creates tension, while the tower serves as a unifying object in the facility and signals facility’s importance for the community in general.

The design of the tower is due to fire training requirements, such as smoke diving in the stairwell. Balconies are used both to rest during smoke diving exercise, and to practice rescuing people.

The bridge spans under the screen and connects with the tower. It is lifted a few feet of the ground to visually highlight division between the city and the fire service area without forming a barrier and provide for good visual connection. It signals a clear distinction to an area that requires special considerations; the general public is able to overlook activities of the fire department from the bridge without being in the way.

The bridge contains rehearsal rooms with direct connection to the tower. It also serves as a roof over the fire department parking lot. The main structural elements of the bridge are two high steel trusses. Exercise room is a box of light clinker brick fitted in the truss. The material is chosen because of its ability to withstand the high temperatures (200 - 300ºC) and its insulating properties. Cladding of the bridge is untreated larch to give the whole bridge appearance of a strong wooden beam. 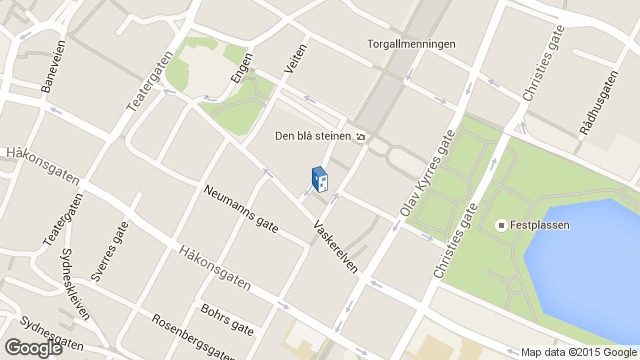 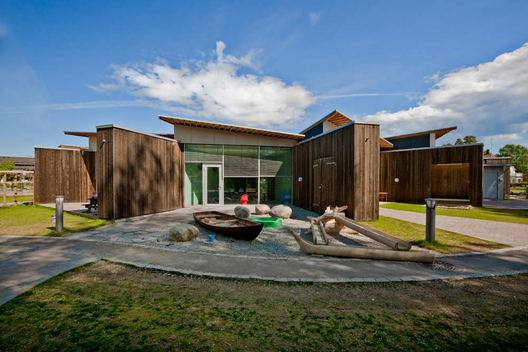