Save
Geothermal Energy: Using the Earth to Heat Buildings and Generate Electricity
Share
Or
Copy

Unlike the air, the temperature in the subsoil varies very little during the year or according to geographical position. A few meters below the surface, the ground temperature is between about 10 to 21°C (50 to 70°F) depending on the region. Dig deeper, and the temperature increases between 20 to 40 degrees centigrade per km, reaching the Earth's core, which approaches 5000 °C. In fact, thinking about how we inhabit a sphere that is orbiting through space with a glowing center can be distressing for some. However, it may be helpful to learn that using Earth's forming energy to generate electricity is a sustainable and efficient way that is already common in some countries. At the same time, we can also take advantage of the mild temperature found a few meters under the ground to acclimatize buildings, whether in hot or cold climates.

Hot springs are a good example of how it is possible to take advantage of the temperature differences found within Earth's layers. Either from some volcanic upwelling process or because of the temperature gradient itself, thermal waters are naturally heated and emerge on the surfaces of some places. As they generally contain a higher mineralization content than common water, they tend to be prescribed for relaxation and even to relieve pain and illness. An iconic project is Peter Zumthor's Thermal Baths in the Swiss city of Vals, almost a sanctuary for these waters. Hot springs occur all over the world, but there are countries whose underground is more active. Iceland is known for having multiple hot springs spread across the country. The Guðlaug Thermal Pools project by BASALT Architects, for example, integrates with the coastal rocks and creates a natural heated pool right next to the beach.

In addition to leisure, it is possible to take advantage of the heat contained in the rocks and fluids below the earth's crust to generate electrical energy. Geothermal energy was initially used in Italy in 1904 and since then it has grown and has been identified as a good source of renewable energy. For this, wells are dug to access hot steam and water contained in the underground. Upon rising to the surface, this heat is used to drive turbines that will generate electricity. Geothermal energy is used in more than 20 countries, such as Indonesia, Mexico and Japan, with the United States being the largest producer.

Despite being essentially clean and emitting little CO2, there are some disadvantages to this type of energy. The first is the high initial cost of installation, but also the emission of sulfur dioxide and hydrogen sulfide. Small earthquakes can also occur, as they operate along the tectonic plates of the Earth's crust.

Through a similar mechanism, it is also possible to heat water and distribute it to infrastructure networks. PK Arkitektar has developed a set of geothermal pumping stations in the Icelandic capital Reykjavik. Today, every home in Reykjavik is heated with geothermal water, making the old oil heating system - which generated smoke, burned fossil fuels and polluted the city's air - obsolete.

It is also possible to use the temperature difference between the surface and the subsoil to heat and cool buildings. Basically, the system consists of installing underground pipes next to the building, filled with water or some other fluid, and a heat pump. This will cause liquid to flow in pipes from the underground to the surface permanently, exchanging heat with the ground. This device can then feed the air conditioning system of the building, through ducts, or be used to heat water. If the ground temperature is warmer than the ambient air temperature, the heat pump will transfer heat from the ground to the building. It can also operate in reverse, moving heat from a building's ambient air to the ground, cooling the building. For a more detailed explanation, read this material developed by the EPA (U.S. Environmental Protection Agency).

There are several examples of geothermal energy used for the air conditioning of buildings. At the Gare Maritime Workspace, by Neutelings Riedijk Architects + Bureau Bouwtechniek, 12 wells dug 140 meters deep do the job of cooling the space, in addition to several other technological and sustainable aspects included in the project. At Sant Pere Pescador Kindergarden, by Abar + Ovidi Alum, the plumbing that runs through the basement of the courtyard is connected to the underfloor heating system, providing air conditioning for the building. At Ecco’s Hotel by DISSING+WEITLING Architecture in Denmark, the geothermal system is part of the overall concept. According to the project’s memorial, “the design of the building is optimized in every way, not only by the use of geothermal heating/cooling and solar energy, but also by the circular shape of the floor plan itself, which allows the best use of the available space, short distances within the building and minimal heat loss due to reduced surface area.”

Making use of locally available and renewable resources for buildings is essential to envision a better future in which we can learn to live in a cooperative relationship with the nature of our planet, and not just exploration. 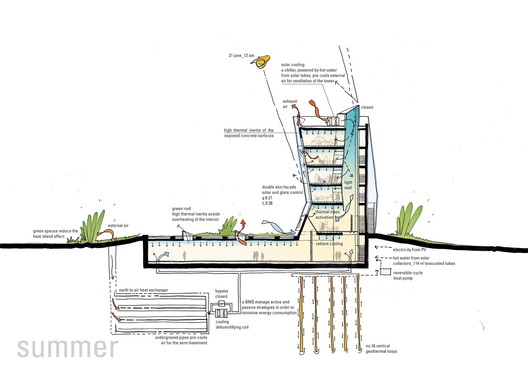