Text description provided by the architects. Ecco contacted Dissing+Weitling towards the end of 2011 with an ambitious plan for a centre – second to none – for both Ecco’s own employees and external conference guests. In addition to the specific requirements to the facilities of the centre, viz. 50 hotel rooms, showrooms, experience and multi rooms, Ecco expressed the idea of a green innovative building that would form a natural part of Ecco’s vision of becoming the best shoe company in the world.

From these directions, Dissing+Weitling drew a conference centre of which all architectural features converge to express the fundamental values of the company.

Ecco is currently the world’s second-largest shoe manufacturer. In order to live up to its own high ideals regarding social responsibility and quality, Ecco itself owns and manages every link in the production chain, and all employees still regard themselves as shoemakers – a company culture of which Ecco is fiercely protective.

Dissing+Weitling has designed a building true to these values and focusing on sustainability, globality and the tradition of craftsmanship.

The design of the building is optimised in every way, not only through the use of geothermal heating/cooling and solar energy but also the circular shape of the floor plan itself which makes for the best utilisation of the available space, short distances within the building and minimum heat loss on account of the reduced surface area. It may be classified as a PlusEnergy building in as much as it is not only self-sufficient with energy, it produces enough energy also to contribute to the consumption of the original conference centre adjacent to the new building.

The circular floor plan is divided into four sections, each of which takes inspiration from one of the four corners of the world. In terms of interior décor and general feel, the four sections are themed according to Scandinavia, Asia, Africa and America respectively. Indoors, the themes are expressed discreetly in small variations in furniture and furnishing, colours and materials, and outdoors, in the colours and origins of the plants and bushes.

The tradition of craftsmanship

The choice of materials reflects Ecco’s philosophy of using natural products. The flooring is rubber and stave parquet, the walls are made from wood and concrete, and the light fittings in the hotel rooms are covered in leather sewn by Ecco’s own employees. Dissing+Weitling has turned the quality of the materials, craftsmanship and design into the pervading themes of the building, strengthening the Ecco brand and providing the users with a sensuous experience of the values of the company. 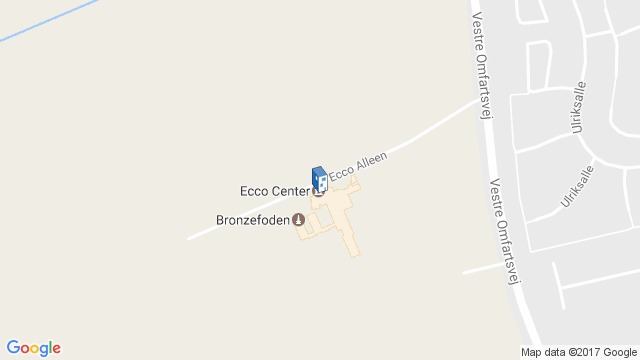