As part of the new Tirana 2030 master plan, Stefano Boeri Architetti has created a new model for schools, transforming them into a place for people of all ages, open every hour of the day and every day of the year. The newly-inaugurated project in Tirana serves as a "new epicenter for life in urban neighborhoods", used by students during the day as a school campus and by the whole community on weekends and public holidays as recreational and meeting places, as well as potential places for shelter during emergencies. 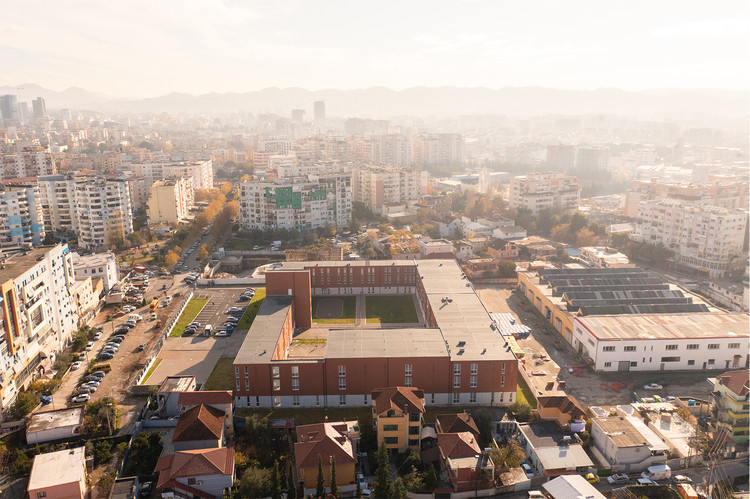 The master plan was designed between 2015 and 2017, and featured the construction of 17 new large-scale schools. The proposal was not only intended as a response to Albania's considerable demographic growth over the past twenty years, but as a means to revive the suburbs of Tirana, and offer a new concept of state schools that are used by local communities as well. This urban growth has saturated and fragmented the urban fabric, with no balance between built and open spaces, and minimal consideration of residents' services.

The new Tirana Regulatory Plan, which covers the entire metropolitan area, operates on three levels: urban forestation, by creating a large continuous orbital forest system around the city, relaunch and redistribution of the smaller centers, and redevelopment of barely-populated peri-urban areas and satellite centers.

If before it might have seemed little more than a splendid utopia, today - after this dramatic pandemic - the theme of open schools has become a real necessity in order to respond to the demand for well-being expressed by residents all around the world. On the educational level, an open school means osmosis with the territory, an exchange of knowledge and experiences with an important impact on the life of the neighborhood. This new open schools project will be able to give Tirana a preview of that vision of an 'archipelago city', a metropolis consisting of neighborhoods which are self-sufficient in providing services to their inhabitants, something which is today being pursued by many other international capitals. -- Stefano Boeri

The new schools feature permeable urban spaces on ground floors, making the squares, streets, and parks that surround the structures active and inviting. People's movements around the main entrances have been designed to ensure maximum flexibility and ease of circulation. Particular facilities and functions such as canteens, libraries, and sports facilities will be used at different times by both students and the community, as they are placed on the ground floor and around the perimeter of the building. Although open and permeable, the school model ensures a necessary degree of safety and protection by following a planimetrically defined architectural structure that separates into an urban residential block inside where all the functions are placed.

In terms of visual design, the buildings feature red stoneware facades that contrast with a white base, forming a combination of materials and colors that pay homage to traditional Italian architecture of the first decades of the last century, that is widely seen in Tirana as well. The tower acts as a landmark, emphasizing the structure as a public architecture. As for the interior design, a lot of attention was given to color, as it is highly influential on the understanding, comfort, and social interaction of users.

The school was inaugurated by the Albanian Prime Minister Edi Rama, the mayor of Tirana Erion Veliaj, and architect Stefano Boeri.