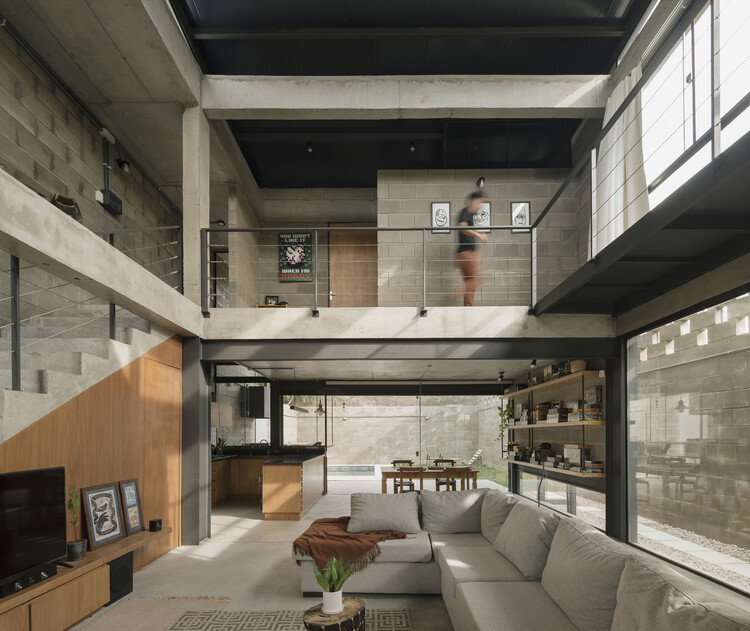 Text description provided by the architects. Located on a plot of 8 x 21 meters, in the metropolitan area of Asunción, we were asked for a house that provided a feeling of spaciousness on the ground floor and the highest possible privacy on the upper floor. We proposed a housing system that can be applied to other urban lots in the city, with a flexible and adaptable structure (in length and width) and rooms that meet different uses for different users. The structure is a mixed system: on the ground floor, it is made of metal, and on the upper floor we used fair-faced concrete. The upper floor blocks are suspended over the front and to the quiet part of the building by means of diagonal tensioners, generating shadow and protection overhangs.

In this first housing configuration, for a couple and their pets, an open social area for meetings and games, an en-suite bedroom, a study and a guest bedroom are distributed in 150 square meters. These spaces were located according to the orientation of the plot and the vertical void ratios that decompress the main volume, to capture natural light and optimize ventilation. Thus, on the ground floor, the divisions are limited, and on the upper floor, there are two closed blocks facing each other. The whole complex is separated from the boundary to the north, by a linear patio, and is closed to the south, protecting it from abundant rains. The upper intimate blocks form a double-height between them over the social area, with a zenith opening that allows ventilation, letting the hot air escape from the interior of the house. The open side retreat indirectly illuminates the spaces and ventilates them, in addition to fulfilling the function of the passage of the facilities (sanitary and electrical), in the future with abundant vegetation accompanied by a block filter, which reduces solar incidence. In the same way that the structure is apparent, the blind walls were executed with pre-molded blocks, these blocks, in addition to reducing the execution time, require fewer accessories that improve their thermal inertia, since they have an air chamber inside.

Prioritizing the economy and performance of materials, the design was preconfigured in such a way that floors and walls do not have additional coatings or plasters, except in humid areas. The facilities are external, the fixed furniture is made of wood veneer, leaving all the textures bare. Decisions made during all instances; of design, context, materiality, and execution, allowed to reach a cost per square meter below the average, and this system could be accessible to a greater variety of users. The model seeks to be adaptable to different implantations and internal configurations, responding to the diversity of the urban ecosystem; couples without children, mothers/fathers, and child (ren), housemates, home/office, single people, people with pets. 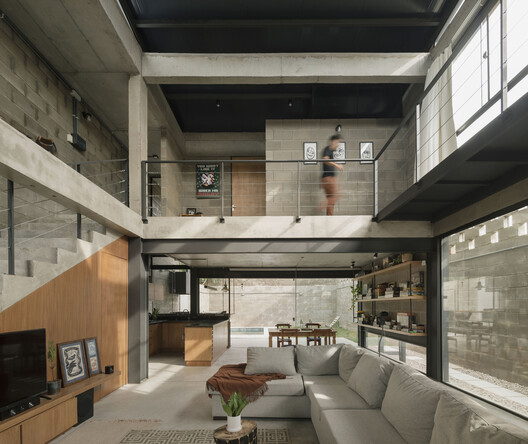