Save
Indoor Bleachers: From Offices to Homes
Share
Or
Copy

Bleachers allow for an observation of the entire surrounding environment and are, naturally, unpretentious and relaxed spaces. They work as meeting places, but can also be used in their original form, to observe a traditional presentation or concert. That is why they are so widely used in work spaces, such as in lounging areas, as well as in schools or cultural spaces.

Generally, each step of the bleachers is equivalent to two traditional steps of the staircase. That is, twice the riser and twice the tread of traditional stair calculations. With this, one can create an adequate space for sitting, with a height of about 40 centimeters and a landing of approximately 60 centimeters.

At Evernote's office in the United States, this is how the bleachers are structured. The staircase was divided in half and, while one side lends itself to vertical circulation, each pair of steps becomes bleachers. But this is not to say that the design must always be regular. At Colégio Marista Santo Antônio, by Hype Studio, the architects take advantage of the stairs located in the central span of the building to create a space that is at the same time fit for circulation, conviviality and fun, thanks to the addition of the slide. The school's central span can become a venue for presentations and the bleachers' levels are dynamically designed, with stair steps interpolated between the levels. Using a similar strategy, this project in Spain also includes climbing walls that take advantage of the slope of the bleachers.

In the Adobe Headquarters Renovation, each step of the bleachers comprises 3 traditional steps, which form higher seats and are used as spaces for informal meetings. At ArchitectureWorks' Cayenne Creative, the corner bleachers act as a focal point in the project. Covered in wood, it leads to the lobby of the office space and forms a double-height living area next to the project's vertical circulation.

Wood is also used to structure the stands at La Cité Innovation Hub, by Taillandier Architectes Associés. Occupying a former aircraft hangar with considerable ceiling height, the project is dedicated to collaborative and sustainable innovation. La Cité hosts several public and private services dedicated to young startups. Taking advantage of the ceiling height, a second floor of offices was created in mass-timber and the bleachers are flanked by two staircases.

In a similar context, interfering with a pre-existing warehouse, the Arquitetura Nacional project uses CLT (Cross Laminated Timber) to create work spaces, as well as a new double bleacher that serves multiple uses.

At Lake Jasper House, in Architecturama, the stands take on another scale in a single-family residential project. As the architects responsible for the project write, “Bleacher-style benches, meeting at right angles, are built into the main space. They are simultaneously oversized furniture, an agora, a circulation area, filters, dividers, bookshelves, structural elements, etc. They can be modified in three ways: as movable blocks that can be rearranged at will (for use as end tables, backrests, steps, etc.), as intermediate levels attached to the main structure but capable of being reconfigured regularly and, collectively, as benches resting on the concrete slab, which can be reassembled in an entirely different way."

At Panorama House, by Moon Hoon, the bleachers are integrated into a multifunctional playful space, which houses a staircase, bookcases, a space for casual reading, a home cinema and even a slide, pleasing children and adults alike.

See many more examples of projects that use this setting in this My ArchDaily folder. 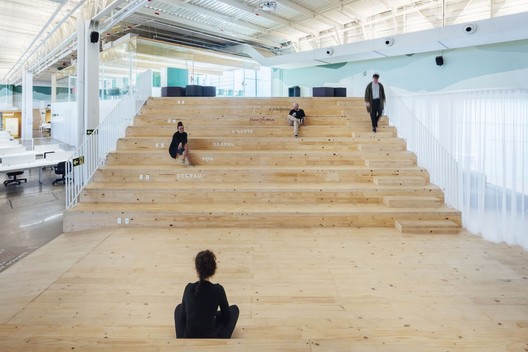