Save
Building History: How the Old War Office was Reimagined as a New London Landmark
Share
Or
Copy

The Grade II listed Old War Office building has been reimagined in central London. As a new destination for the city and rebranded as The OWO Residences, 85 homes are available in the Old War Office, which has been closed to the public for over a century. EPR Architects are working to restore and convert the building into residences and the first Raffles hotel in London. 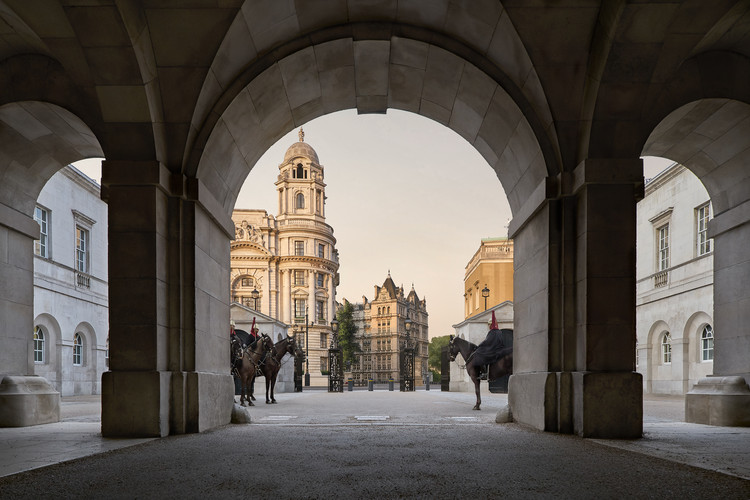 Once complete at the end of 2022, the former Old War Office will span 760,000 square feet comprising 85 branded residences, 120 hotel rooms and suites, nine restaurants and bars, amenity offerings, and a spa. Formerly the site of the original Palace of Whitehall - home to monarchs between 1530 - 1698, the building has witnessed a wide range of events whilst political and military leaders including Winston Churchill, David Lloyd George, and Lord Kitchener held office. It was also John Profumo’s base when he was Secretary of State for War and inspired Ian Fleming to write the Bond series after working for Britain’s Naval Intelligence Division.

The Hinduja Group is behind the project, an international multi-billion turnover group founded in 1914 and involved with the building since its acquisition in 2014. It has worked with a team of experts including Historic England and Museum of London Archaeology. The hotel interiors are being designed by New York-based designer Thierry Despont. The Hinduja Group has partnered with Raffles Hotels & Resorts, who will be operating the 125-room and suite flagship hotel at The OWO, as well as the 85 branded residences.

Scottish architect William Young first embarked on the design of The Old War Office in 1898, but the project was taken over by his son, architect Clyde Young, when William died in 1900. The building took five years to build and cost £1.2million, finally completing in 1906 and spanning 580,000 sqft with 1100 rooms set over 7 floors and 2.5 miles of corridors.

Originally completed in 1906 and designed by British architect William Young, the Old War Office is the site of the original Palace of Whitehall, home to Henry VIII and other monarchs. Located in Whitehall opposite Horse Guards, the OWO lies within walking distance of the capital’s highlights. Residents and hotel guests will be near Buckingham Palace, The National Gallery, The Tate, The Royal Academy, St James’s Park, Embankment and South Bank. The OWO is also adjacent to 57-acres of St. James’s Park.

With ceiling heights in residences that reach over 12 feet and full-length windows, the interior proportions reflect classic Edwardian architecture that has been adapted for modern living. The residences feature interiors created by design studio 1508 London with kitchens from British brand Smallbone of Devizes, Waterworks brass ironmongery and Onyx marble. Duplex, lateral and penthouse residences range in size from studios to five-beds; each residence is unique and specifically tailored to suit its location in the building.

“The design team was captivated from the moment we entered the building”, comments Lucy Savanis, Design Principal at 1508 London. “Understated luxury and timelessness played a huge part in our design language for the project. Our brief was to preserve this chapter of history for future generations through authentic design; to create a home for the world’s most discerning residents and celebrate the building’s unmatched quality, in terms of history, character and architecture.”

Savanis continues; “The intricate William Young architecture ensures no two residences are the same, each with unique proportions and floorplans. In light of this, we have tailored each residence to suit its location within the building, whether that be a voluminous three-bedroom apartment overlooking the residents’ garden or the two residences incorporating their own private octagonal turret. We worked within the existing fabric of the building and exposed its unique features; extraordinary three meter wide corridors on some floors have been showcased as a central feature at the heart of the home and grand entrance hallways bring back a sense of ceremony to modern living, a feature unique to The OWO Residences.”

In terms of the new part of the facade, the 6th and 7th floor roof extensions are a mix of stone cladding and a mansard roof style. Around the Residents Garden, a private residents-only landscaped courtyard and new stone facades have been built. Originally, this triangular open space was surrounded by glazed white brickwork and conceived as a lightwell rather than a courtyard.

In this area, the original facades have been principally retained and internalized adding a bay and therefore de facto “moving” the courtyard. This solution allowed the team to preserve the cellular nature of the spaces, retain the proportion of the original rooms and the legibility of the corridor spaces which would otherwise be fragmented by the creation of smaller spaces such as kitchens and bathrooms, which are now mostly located in the new section. This “relocation” of the courtyard has been one of the most important decisions made on the project, providing the space to enable the optimal layouts for these super prime residences whilst at the same time preserving the heart and soul of this historic building.

The striking architecture of the facade was in tune with the new Imperialism of the 1880s with domed turrets along with sculpture. With the advent of steel-framed construction, which arrived from the United States, domes became cheaper to build but when it came to the War Office, architect William Young used a different technique: the domes on his turrets are supported on cones of iron and concrete. There was a specific reason for using domes above the circular corner turrets on the War Office. Despite its bold Whitehall facade, which looks as though it should front a rectangular structure, the site was not in fact rectangular - the plan was in the shape of a trapezium, in which all four frontages are of different lengths.

Original features, such as ornate mosaic floors, detailed architectural moldings and ceiling heights have all been retained where possible throughout the building to create some of the living spaces. Former mailrooms (known as ‘messenger screens’ in a nod to the boy scouts that acted as messengers in the building during the war) have been incorporated into a selection of residences and repurposed as home offices. Similarly, all the interior materiality was chosen to complement the historic elements of the building. 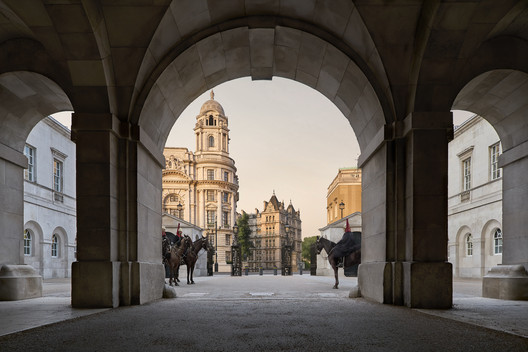