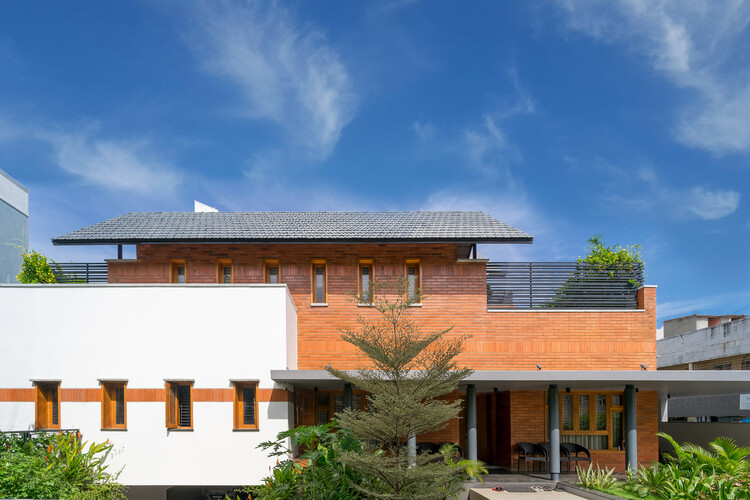 Text description provided by the architects. Located in Saligramam, Chennai, this upscale home is carefully crafted & envisioned to give a serene escapade brimming with earthy luxuriance for a family of 5, despite being situated amidst the dense urban concrete jungle. With roads on both east & north sides, the 14 cents square plot is closely enveloped by residential & commercial spaces.

Entrance to the site was provided from the east side to ensure maximum privacy and easier accessibility. A transitional entryway filled with lush greenery welcomes the user, which is curated to provide a much-needed respite from the chaos outside. The unwinding courtyard, complementing two linear blocks on either side forms the built mass spreading up to 2/3 of the site. This inward-looking courtyard gently veiled from the outer world space, blends the disparate entities, outer and inner, into a harmonious whole and acts as the innermost core of the house.

The front built area comprises common areas and a kitchen. The second layer of the built area separated by the courtyards includes the bedrooms and pooja area. In this way, the user can maintain their privacy even while entertaining guests. The dining space, located in between the two courtyards, connects the two built zones. Togetherness and bonding are fostered by this comforting setting of the dining room. The inner courtyard creates a sense of calm in the home with the sounds of birds, water gushing from the fountain, the shining light of the sun, the grace of the falling raindrops, and the eerie visions of the stars. Amidst the user's varying moods with the space, the Buddha statue remains a silent and symbolic centre.

Open doors from the main entrance invite your eyes to the Buddha statue. Besides restoring tranquillity to the space, this statue also serves as a visual axis and spine that links the spaces. Additionally, the statue is also an element that exemplifies the spiritual essence of the space through the subtle sound of the water fountain and various sensorial aspects that are felt in the dining area as well.

The South-West corner of the building has two floors above ground and a towering water tank; this provides a much-needed shade to the rest of the house from the scorching sun in Chennai. In the first built-up area, the home theatre sits above the living room. A terrace garden flanks the home theatre on either side, overlooking the courtyard below. Thus, the courtyard and the home theatre are connected dynamically.

A natural vibe is evoked in the courtyards by the random rubble cladding. A layer of porotherm bricks on the façade, significantly reduce the heat-intake of the structure. The kitchen opens out to a courtyard covered with jaali and glass, while the opposite side is left open to invite rain and sunshine. As a building mass, with its sloping roof and the carefully articulated structure enriched by the use of natural materials, the residence becomes a landmark among unremarkable concrete surroundings.