Herzog & de Meuron has unveiled the design of the new Memphis Brooks Museum of Art overlooking the Mississippi River. The 10,500 sqm structure will feature expanded galleries, exhibition spaces, and open spaces for community and educational programs with free public access, and is expected to open to the public in 2026. 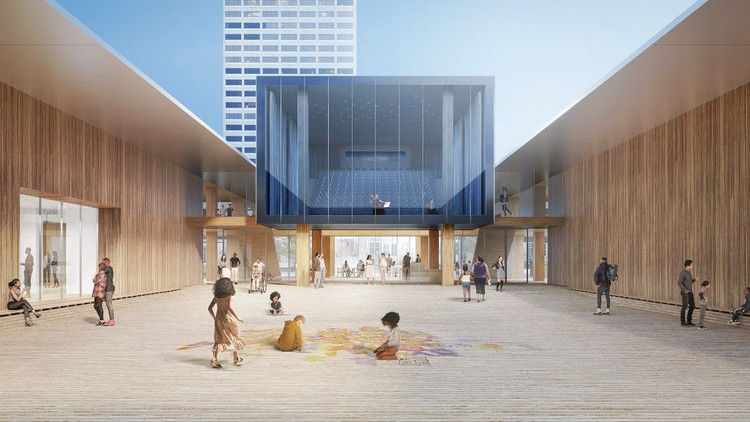 The new museum is part of a redevelopment project of the Memphis riverfront, which is currently underway. The regeneration plans include a preservation of the site's historic cobblestone landing, new parks, recreational pathways, a "cultural corridor" alongside the river, and connections with the city center and downtown area. The riverfront features projects by Studio Gang and SCAPE.

The proposed structure will be located on Front Street between Monroe and Union avenues on Cotton Row, an area considered as the oldest part of Memphis. The design features a pair of double-height wooden columns, a metallic canopy, and a brick paved courtyard as the main entrance. The main museum structure is wrapped with earthen cladding surrounding a horizontal glass box as a central unit. The glass unit's transparency encourages passersby to catch glimpses of the entrance lobby and museum store. The museum also includes a wooden-clad courtyard used as a public gathering space and recreational area.

We’ve aimed to design a welcoming civic landmark that upon approach explains itself visually and from the inside reminds the visitor where he or she is in relation to a legendary river and an historic city. The result will be a museum that’s both in Memphis and of Memphis, a landmark that couldn’t be anywhere else. -- Jacques Herzog, co-founder of Herzog & de Meuron

Structurally, the volume extends the city’s original street layout all the way down to the river. The architects used the site's challenging steep terrain to dictate visitors' movement and sightlines and create a transparent, inviting structure all around. The lower floors include parking spaces and public facilities, whereas the upper floors house the galleries and exhibition spaces. Permanent collections will also be placed around the central courtyard and a 175-seat box theater with raked seating is placed above the entrance lobby.

While describing the project, the architects speak of five facades; In addition the to earthen clad walls and transparent elevations, the south façade stands as a solid wall, providing adequate art storage facilities that require little natural light. The fifth facade is the roof, designed with an occupiable deck, greenery, and a panoramic view of the river and city.

Recently, Herzog & de Meuron’s first realized project in Korea has been completed and open to the public. Situated in the heart of Cheongdam Dong, one of the most commercial areas of Seoul, the ST International HQ and SongEun Art Space offers non-commercial art spaces, a variety of new exhibition spaces, and offices for ST International both above and below ground, creating an inviting space for the public to engage with contemporary art. 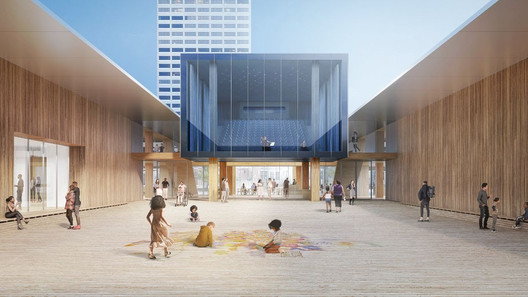