The city of Paris has announced that it will be investing €250 million to upgrade its cycling infrastructure and expand its network of bike lanes with aims of becoming “100% cyclable”. The French capital's investment comes through Bike Plan, a 5-year-long urban project that will reinforce the presence of bikes and provide safe and well connected routes for passengers and pedestrians. 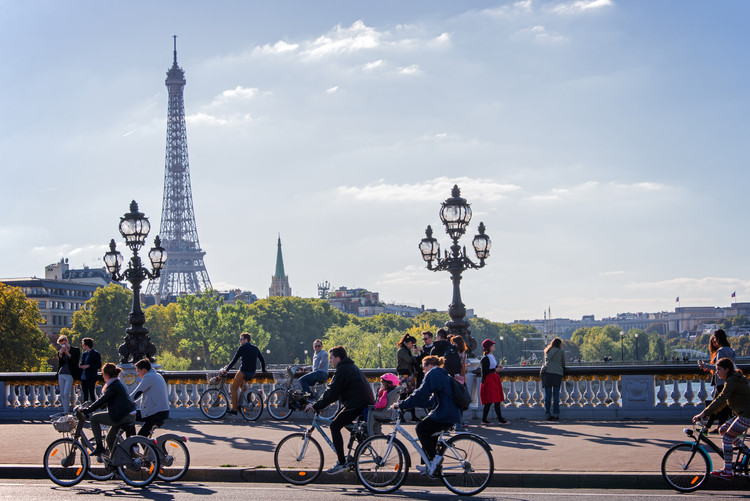 Between now and 2026, the city will expand its routes and add 180 kilometers of new permanent bike lanes. Cyclists will also have more than triple the amount of parking spots, reaching around 180,000 instead of the existing 60,000. The city will also invest in improving the infrastructure around the main connection points between the neighboring suburbs and the city, creating better integration across the wider metro area.

The expansion plans come after a noticeable amount of Parisians took interest in biking during the pandemic instead of their regular commuting means. Today, the city sees almost 1 million bike journeys on a daily basis without proper infrastructure to cater to this amount. The city's existing bike lanes are shared with cars and motorcycles, and are separated by paint markings on the road rather than actual physical barriers, which increases the risk of collision. The city has also promised to ensure the safety of pedestrians by reinforcing driving and road rules, and increasing the amount of police controls.

Considering that car pollution can worsen the worldwide health crisis, Paris Mayor Anne Hidalgo has announced in May 2020 plans that encourage the use of bike lanes and buses by generating more spaces for pedestrians and cyclists throughout the city and reducing the number of cars in the center. The plans were announced to maintain the anti-pollution and anti-congestion measures introduced during the confinement period, as the city reopened post pandemic.

Cities all around Europe have implemented biking infrastructures within their urban planning. Considered as one of the most bike-friendly cities in the world, Amsterdam continues to build bicycle infrastructure within its urban fabric. In 2019, the city released a new plan for 2022 that focuses on improving bicycle parking lots and existing infrastructure. The city is creating new “royal routes” to accommodate more bicycles, as thousands of new habitants are relocating to the capital every year, and widening existing cycle tracks. They are also increasing the number of low-speed cycle streets, and redesigning major intersections to ensure the safety of cyclists.

NewsArchitecture NewsBikeParisFranceUrban PlanningArchitecture
Cite: Dima Stouhi. "Paris to Become "One of the Most Bike Friendly Cities in the World" By 2026" 05 Nov 2021. ArchDaily. Accessed . <https://www.archdaily.com/971436/paris-to-become-one-of-the-most-bike-friendly-city-in-the-world-by-2026> ISSN 0719-8884