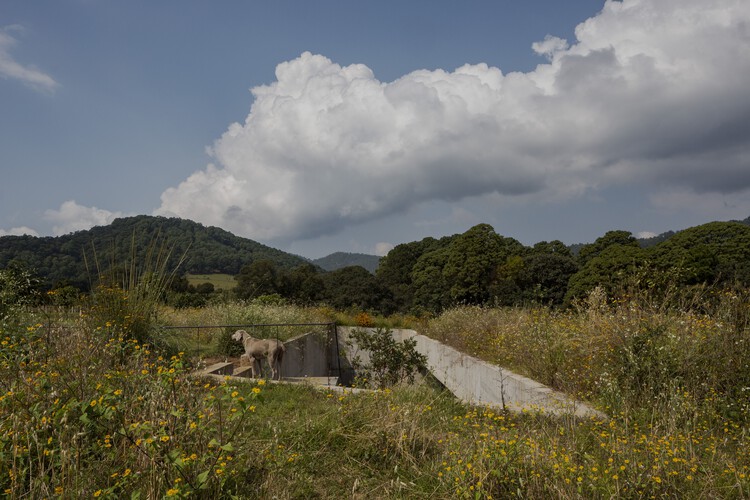 Text description provided by the architects. A couple of hours outside of Mexico City, the rural lake town of Valle de Bravo sits in a valley between mountains, offering perennially agreeable weather and panoramic nature views. Within it, the site for Casa Aguacates — a residential project meant to function as a weekend retreat, and designed by architect Francisco Pardo — is a peculiar one, in which an avocado field slopes down into a dense forest and glen.

“The main idea was to have a view of the forest, but the client also wanted to leave the avocado field intact,” explains Pardo, “which is how we arrived at the decision of burying the house.” Avocado trees sprout above the concealed and unassuming structure, which overlooks the treetops of the forest. The client, Pardo tells, practices hang gliding, and so the pair took a special interest in what they deemed “the fifth facade” — the view from the sky. The intention to have a minimal impact from that perspective became the project’s defining characteristic.

The program was simple — an open plan layout features a kitchen, dining room, and living room, with a master bedroom, two additional guest rooms, and a studio surrounding it. The back area was pierced to become an interior patio, providing a second source of sunlight and ventilation, as well as a juxtaposition of natural elements. On one side, a view of untamed greenery; on the opposite, a domesticated landscape. Thus, the project exists between two realities, functioning as a subtle expression of architecture’s ability to exercise control over — and coexist in pleasant tension with — its natural surroundings.

As with most of the projects developed by Pardo’s studio, the materials palette leans minimal. “Especially because it is a weekend home, we wanted to ensure it would be very low maintenance,” Pardo says. A bare concrete structure is interrupted only by walls coated in Chukum, a natural stucco from the region of Yucatán, Mexico, and partitions made of pine wood, reused after they had functioned as the falsework during the construction process. “We actually also used more of that leftover wood to construct a cabin above the house,” says Pardo, “which can be a service area or a lookout point, because it offers panoramic views of the site.”