For 10 days, Berlin's abandoned International Congress Centre (ICC) was transformed into a stage for performance, acrobatic and visual arts, films, concerts and talks during Berliner Festspiele's "The Sun Machine Is Coming Down" event. The 1970s futuristic building that remained closed for the last seven years provided the framework for a multi-layered experience, illustrating its potential for reactivation and adaptive reuse. 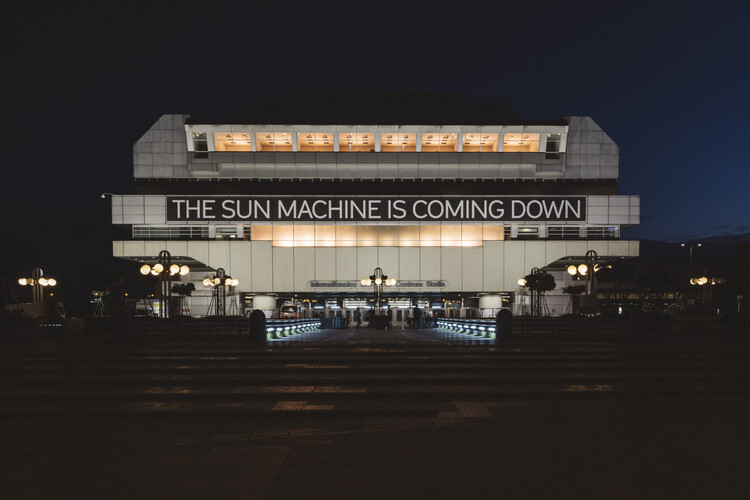 "The Sun Machine Is Coming Down" event, whose title borrows a phrase from David Bowie's 1969 song "Memory of a Free Festival", took place between 7 and 17 October and proposed an assemblage of art mediums and genres within a disused structure with a significant cultural dimension. Blending exciting art with site-specific installations while making use of the spatial framework of the unique building, the event is part of a tradition of similar performance schemes that aim to generate new realms of experience.

The Berliner Festspiele wish that this mixture of transformation, poetry and 'Sun Machine' has set an example for a different kind of artistic institution in Berlin, both for the future and for this incredible building." – Thomas Oberender, Director of the Berliner Festspiele and the project's initiator.

Built in 1979, the ICC, designed by architects Ursulina Schüler-Witte and Ralf Schüler, is a unique example of high-tech, futuristic architecture, whose machine and spacecraft aesthetic can be traced to the smallest of details. Featuring two large auditoriums with a shared central stage, a large foyer and various amenities, the project was highly praised thought its operational phase. The building closed its doors in 2014, and the same year, a concept was put forward for the reactivation and conversion of the structure into an International Congress Center for Contemporary Culture, developed by Bureau N, Julia Albani, Florian Heilmeyer and Something Fantastic. Although the idea gathered public attention at the time, the fate of the building and the refurbishment project is yet to be established by decision-makers.