Text description provided by the architects. The project was born from the will of the town hall to rehabilitate the façade of an existing ruin. The structure had a sunken roof, and only a brick wall remained in a decent condition. The intervention consisted in rehabilitating this wall and extending it with a new one, increasing the size of the space to adapt it for its new function: a multifunctional space and wedding hall for the Justice Courts in Alcalá de Henares, Madrid.

The new façade maintains the same brick material as its older counterpart but contrasts with it by the way it is used. In opposition to the load-bearing, massive structure, the new façade floats above a continuous ribbon window, through which one can see into a small garden area. Next to this window, a sheet of water reflects the sky, and floods the room with reflections, bringing a sense of calm to the space.

The functionality of the space is simple. The inside of the pavilion is split into two multifunctional, double-height rooms, articulated around a central core that hosts the reception, bathrooms, press rooms, and services. The pavilion looks to dignify the civil union ceremony, usually relegated to unimportant, simple spaces, by proposing to give them the ceremonial importance of traditional religious unions. 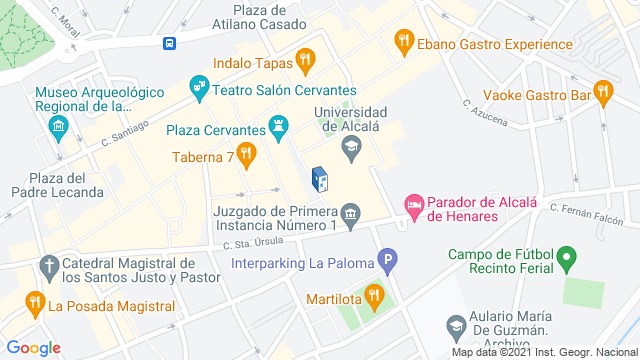