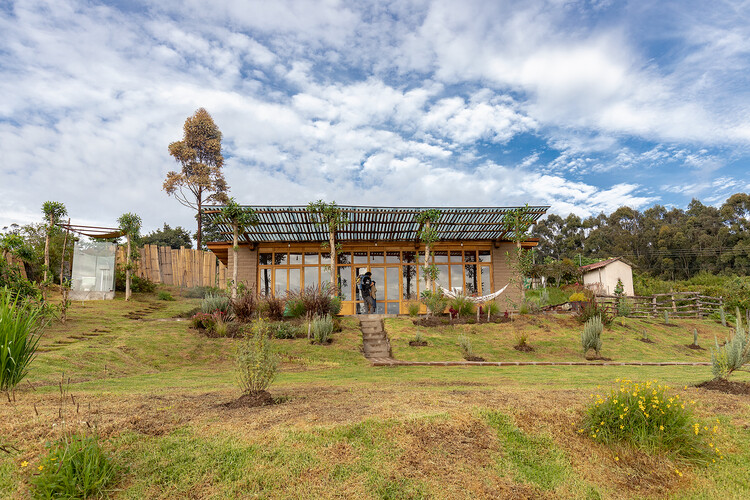 Text description provided by the architects. Jose studied ecology, has always approached nature, feels part of it blurring the boundaries between him and his surroundings. His house tries to do that too, spreading its elements on site and turning the garden into its circulation. José and his house question the comfort standards. For getting from bed to bathroom, you have to walk outside. Showering takes place in the middle of the plants in his greenhouse. There are places where people do not know whether they are a garden or house, or a house built by the garden.

The lessons of vernacular architecture in the interstices between the house and the garden: the structure that builds the habitats born from the garden, is alive. The greenhouse shower is covered with polycarbonate, supported by Lechero poles tensioned structure. Modeling a grid of living columns has its charm. The poles' height in the greenhouse is the same as the living fence's poles. It worked in rurality and worked here. The burden they bear is minimal, allowing us to make radically basic and primitive details.

Pooping for José is a ritual, between him and nature there is only glass. The advantage that your private space is a little bit isolated from neighbors is not to worry about prudish stares. We imagine that guests will have many anecdotes to tell after visiting him. On each corner of the cubicle is a Lechero tree that supports a light cover made of plywood and is protected with an asphalt fabric. Over here, the trees are sized about 3m high and are 1m buried on the ground.

We learned from the rural tales to prune them completely before replanting. After few weeks, the first sprouts came out; it is impressive how easy these trees can be transplanted: from 46 we used, only 5 died and had to be replaced.

Finally, four trees welcome the main pavilion, the social area for receiving family and friends. Trees hold a polycarbonate cover supported in chaguarqueros tied with chilpe. The interior space is for cooking, eating, and sleeping; sheltering and keeping a comfortable temperature, looking at the surrounding terrain, valley, and mountain range. The same soil removed in the excavation was used for load-bearing adobe walls; they rest on a stone foundation that also works as a skirting board.

The wall built in a “C” shape let the main facade be a big glass-wood structural carpentry. The roof distributes its weight over a wooden base. The roof span is solved by two standard section beams; the section is reinforced tying up a similar piece and over them wooden staves, waterproof fabric, earth, and brick tiles, between which bad weeds will grow.

The project is complemented by a permaculture system developed and built by José himself, which he describes as follows: The house is not plumbed into the sewage system: black water is cleaned through a filter with red worms (Eisenia foetida); gray water from cleaning with biodegradable soaps goes through a grease trap and a dwarf papyrus (Cyperus haspan) filter. The filtered water from the two systems feeds various fruit trees. The organic waste goes to a composter that mainly feeds the soil of the vegetable and medicinal plant gardens. In this system, native-wild plants have been kept to attract insects and birds from the area, controlling the proliferation of possible plagues. It works as a biological control in situ. 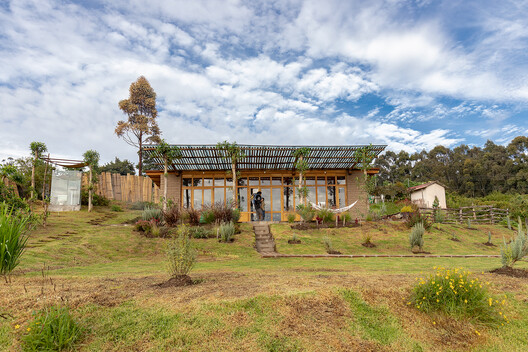